Sometimes it takes new and unexpected encounters for people to truly start contemplating their decisions, emotions and mortality. That’s certainly the case for the struggling protagonists, a married couple that feels engaging in new experiences in an unfamiliar environment can help them overcome their past trauma, in the new voyeuristic thriller, ‘Looking Glass.’ But running from their previous pain and loss has in fact actually just pushed them into an even more dangerous and life-threatening situation.

The drama was directed by experienced television helmer, Tim Hunter, and written by Jerry Rapp and Matthew Wilder. Momentum Pictures will release ‘Looking Glass’ on Friday in select theaters, as well as on VOD and Digital HD.

‘Looking Glass’ follows Ray and Maggie (Nicolas Cage and Robin Tunney), a married couple whose lives have been shattered by the loss of their daughter in a tragic accident. In an effort to rebuild their relationship and start a new life, the spouses decide to move and purchase a motel in the middle of nowhere.

After the couple starts working at their new motel, Ray begins to notice strange occurrences. So he initiates his own investigation, and pieces together the history of a bizarre murder associated with the building. As he later starts looking around in the basement, Ray discovers a crawl space, which leads to a two-way mirror into one of the rooms. He soon becomes obsessed with the unusual activities that happen beyond the looking glass, but as a result, his marriage, sanity and his very life are threatened.

Tunney generously took the time recently to talk about starring in ‘Looking Glass’ during an exclusive interview over the phone. Among other things, the actress discussed how she was initially drawn to play Maggie in the thriller because she had previously worked with Hunter on another project, and felt comfortable collaborating with him again. She also noted that filming the drama independently allowed the cast and crew, especially Hunter, to have more creative control over Maggie and Ray’s arc and emotions throughout the story than if they made the movie at a major studio.

The conversation began with Tunney revealing why she wanted to play Maggie in ‘Looking Glass,’ and how she become involved starring in the film. “I had worked with the director, Tim Hunter, in the ’90s. We worked on a true story about the Holocaust that Barbra Streisand produced. Since I knew him, so they sent me the script,” the actress disclosed.

“I’m also a huge Nicolas Cage fan, and I wanted to work with him. I grew up on his movies, and have admired him for so many years. That’s all I really needed. I was like, ‘I don’t think I even need to read this! I want to go and play his wife!'” But Tunney also admitted with a laugh that she was anxious as she began collaborating with the Academy Award-winning actor. “I’ve worked with so many actors who haven’t made me nervous, but working with him did make me nervous!”

Further speaking of working with Cage on the drama, Tunney explained what her experience of acting with her main co-star once they began filming was like. “There wasn’t a rehearsal process. But we talked about how I was curious about (Ray and Maggie’s) history of what happened with their child, what that day was like and how long they had been together before that,” the actress shared.

Tunney noted how Cage was incredibly prepared as they prepared for each scene on the set before they started shooting. She explained that many actors will hold notes with their lines that they can reference while they were blocking their scenes. But Cage knew every line in the movie before they started filming.

Another aspect about Cage that Tunney admired was that “It was also just him on the set; he didn’t have any people around, not even an assistant. Usually actors have a lot of people around them, and he didn’t. He was really nice, humble and interesting, and it was great working with him.”

The actress added that since she knew Hunter before production on ‘Looking Glass’ began, “it was the perfect situation for me, as I had just had a baby. Since Tim’s a friend and someone who I had worked with before, it was easy for me to go back to work. Since most of the story takes place in the motel, I had the house that was right next to it. That way, I could go feed my baby, and go right back to the set. So it was really great.”

Also following up on her experiences of collaborating with Hunter on the film, Tunney then mentioned that her popular Emmy Award-nominated police drama series, ‘The Mentalist,’ ended in 2015. After the show ended, she appeared in a play, and then had her baby. So when she signed on to star in ‘Looking Glass’ after that, she hadn’t worked on a film in almost two years.

“So it was nice to be around people, like Tim, who I felt safe around. There wasn’t the process of trying to get to know a new director. I also knew that he believed in me and was on my side, so that was really nice. I also really like him as a person. I feel like he also elevated the material,” the actress shared.

With ‘Looking Glass’ being mainly set in and around the motel, like the actress mentioned, she then discussed what the experience of shooting the thriller in both real locations and on sound stages was like, and if she has a preference of either process. “I would say we shot about 80 percent of the movie at the actual motel, and then we shot the other 20 percent on stages. As an actress, I don’t have a preference of either way. I’ve been acting for so long, I’m used to both experiences,” Tunney mentioned. “No one has ever asked me that question before, so it’s an interesting idea to think about.”

The actress added that “When you shoot on a stage, the sets are usually so well built, they feel like real locations anyway. But stages can be more conducive to acting, because you don’t have to worry about things (not connected to the film) disturbing the shoot. The crew can also put the camera in more places, because the sets are built for the particular production, and walls can be taken out.”

Tunney then delved into how the experiences that Maggie and Ray have after buying the motel, with the guests, local residents and police force, influence the way the spouses view, and interact with, each other. “I feel like the whole point and driving force behind the plot is that the marriage was broken to begin with. They lost their child, and they’re trying to start over. But they’re not talking about it, and things aren’t getting better. So I feel like their marriage falling apart is due to them not being able to deal with what’s happened. It’s that quintessential story of trying to fix a problem geographically, by going somewhere else. But that never really works, because the problem’s still there,” the actress noted.

The experience of also shooting ‘Looking Glass’ independently didn’t influence the way Tunney approached portraying her role of Maggie. “I think there are advantages and disadvantages to both independent and bigger studio films. You shoot indie movies really quickly, and sometimes you wish you had more time to film a scene. Sometimes you also don’t stay in places that are as nice as your own home, and there are things you give up, in that sense,” the actress explained.

But there are also advantages of making independent movies, Tunney also indicated. “You don’t have to take notes from a million different people. I think for the most part, Tim was able to shoot the film that he wanted to. I think he enjoys making these types of movies that are different. I don’t think there are any other recent films that are similar to this one, as it doesn’t behave in the same ways.”

Now that ‘Looking Glass’ is being released this week, the actress is looking forward to exploring what’s next in her career, both in movies and on television. “I think the mediums are very different, especially network television. Working on network TV shows is like a marathon, because you shoot 24 episodes over the course of nine or ten months. It’s a very long haul, and it can be incredibly exhausting,” Tunney divulged.

“But at the same time, there’s something amazing about being able to stay home with your family, while also having a place to go for work that feels like family. I like working on both television and movies, but if I was going to do another TV series, it would be nice to be on one that has 10 episodes, as opposed to 24, per season, and do something that’s a little bit different,” the actress also admitted.

“It’s hard to point out the differences between TV and films these days, as there’s so much good content on television, as well. At my age, I have no desire to be in some big action movie; I’d rather be on something like ‘The Sopranos’ than a ‘Die Hard’ movie,” Tunney revealed with a laugh. “I think there are so many great things on television that are character-driven. At the same time, doing a network television show is trying, as there’s a lot of information that you have to pass on to the audience. But being on a show is a good job in general, so I’m not complaining!” 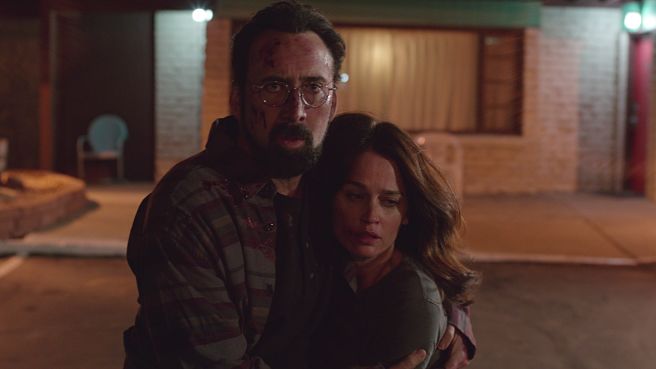