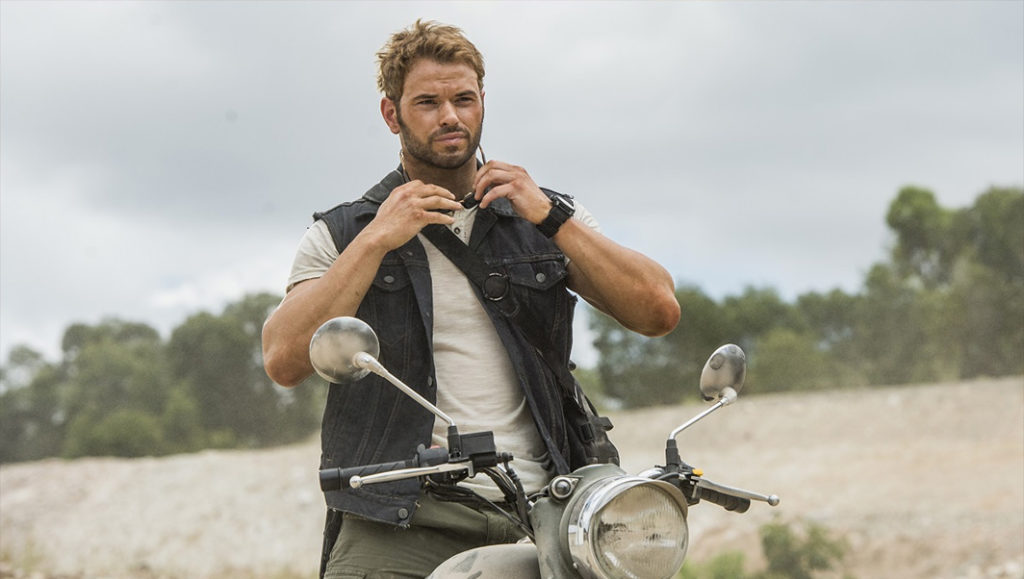 Stepping outside of their comfort zones, in an effort to not only support their colleagues but also reinvent themselves, is a powerful theme in the new action film, ‘7 Guardians of the Tomb.’ Kellan Lutz, who’s best known for playing vampire Emmett Cullen in the ‘Twilight’ film franchise, is doing just that with his latest movie, as he not only helps his co-workers, both on-screen and off, but also continues to powerfully revamp his career.

Lutz expressed interest in collaborating with co-writer-director Kimble Rendall on ‘7 Guardians of the Tomb’ a year before the script was even ready to be shown to actors. The performer also embraced portraying one of the heroes in the spider-driven adventure film, which further solidified his up-and-coming status as an action star. His continued transformation as an actor can now be seen in theaters, as well as on VOD and Digital HD, as the movie was released today by Gravitas Ventures.

‘7 Guardians of the Tomb’ follows Jia (Li Bingbing), an Australia-based expert in venomous animals, as she’s informed by her deceased parents’ business partner, biotech corporation CEO Mason (Kelsey Grammer), that her brother, Luke (Wu Chun), is missing. Luke went on a mission for Mason to find a medical breakthrough in one of China’s deserts. The duo immediately sets out to find Luke, with the aid of a search and rescue specialist, Jack (Lutz). The team is also helped by several of Mason’s employees, including Chen (Jason Chong), Milly (Stef Dawson) and Gary (Shane Jacobson).

After the team sets off for the rescue mission, a flash fire forces them off the road and into an abandoned building. Upon entering the building, they have their first encounter with flesh eating spiders, which Jia discovers are believed to be only found in Australia. She then realizes that the species were created through an ancient form of genetic engineering, and were infused with extremely deadly venom.

So the group decides to seek refuge underground, where they discover a mythical hidden city. Inside the metropolis, the spiders protect a well-preserved mummified Emperor from 200 BC. His obsession with achieving immortality led to the discovery of an incredibly potent elixir that could extend his life. So Jia and her colleagues must do whatever it takes to save Luke before they’re attacked by the spiders, and they awaken the Emperor.

Lutz generously took the time recently to talk about starring in ‘7 Guardians of the Tomb’ during an exclusive phone interview. Among other things, the actor discussed that he was drawn to play Jack in the comedy because he not only enjoys Rendall’s directing style, but he also felt the filmmaker created an interesting concept for a spider movie. Lutz also mentioned that he embraces the experience of performing stunts while shooting action-adventure films like this one, which features a mix of CGI and practical effects.

The conversation began with Lutz explaining why he was interested in playing Jack in ‘7 Guardians of the Tomb.’ “I met Kimble about four years ago when he was doing press for his movie, ‘Bait,’ and I really love the guy. He’s super fun, and great to work with. Just seeing how he could make a sharks in a supermarket movie work” made the actor want to work with the writer-director on the action-adventure film.

“Kimble told me, ‘Hey Kellan, I have a spider movie, and I really want you to read it when I’m done writing it.'” The performer added that when Rendall initially described the story for ‘7 Guardians of the Tomb,’ it sounded like an interesting concept for a spider movie that reminded Lutz of director Frank Marshall’s 1990 fantasy horror film, ‘Arachnophobia,’ which stars Jeff Daniels and John Goodman. “So I was like, ‘Sure, why not?!?’ He then emailed me the script about a year later, and I remembered him talking about it. So I read it, and really dug it. It was like an ‘Indiana Jones’-esque story, especially with all of Jack’s superhero antics.”

The actor also divulged that “It was also really great to work with Kimble on the set. During production, we added even more layers to Jack. We thought that he needed a kryptonite. He’s such a cool, save-the-world hero that we were like, what if he’s afraid of spiders, since we’re making a spider movie? That would be really funny. Kimble loved that idea, so we added that in. I think that made Jack a bit more human and real,” Lutz revealed.

The performer also revealed that he “has a lot of fun on set, and that’s in part to working with Kimble and such a great crew. While he kept it running like a well-oiled machine, it was a fun movie to be a part of as an actor. It wasn’t too serious, and we all understood that we were making an ‘Indiana Jones’-‘Arachnophobia’-eque movie with spiders. Obviously, we didn’t want it to come off as cheesy, but we also wanted to make sure that the threat felt real. Although at the end of the day, we just wanted to have fun, and go along for the ride.”

Lutz added that he feels that including an overall comedy was important to the story in ‘7 Guardians of the Tomb.’ “Having a character like who Shane Jacobson played was essential. He’s such a funny guy, and Kimble wrote a lot of Gary’s lines, knowing that Shane was going to play him. Shane really brought that character to life, which was so much fun. Then there was also Kelsey Grammer. Since we had those two comedic actors on the set, when the cameras weren’t rolling, we were laughing all day, everyday.”

The performer also shared that the cast regularly improvised while they were shooting the adventure movie. “If something wasn’t working for whatever reason, we discussed why it wasn’t working, and then find a way to make it work, story-wise, for all of the characters. But overall, everything was well put-together on the set.”

The set for ‘7 Guardians of the Tomb’ was located in the Gold Coast in Australia, and the production lasted for a month-and-a-half during the summer. Lutz shared the city’s “a beautiful place to be. I also love to travel, so anytime I can star in a movie that’s being shot internationally, it’s a great experience. So no complaints there!”

With the movie being largely driven by its adventure sequences, the actor revealed that he enjoys performing stunts. “I love starring in action movies, which is why I keep starring in them! They’re a good workout for the mind and body. I’m a person who loves having new adventures and experiences that I can keep in my memories. So whenever I get to do a new cool stunt on a rig, I really remember them. We did some fun ones on this set,” Lutz shared.

The performer also revealed that there was a mix of CGI and practical effects and stunts that were incorporated into ‘7 Guardians of the Tomb.’ “Kimble put these fake spiders all around the set, as well as in the scenes, so that we’d have something to look at, and everyone was looking at the same spot.”

Lutz added that shooting the stunts was “really was a team effort. You can only do a stunt a few times, as you don’t want to do it over and over again,” as they’ll star to lose their authenticity in the later takes. “So you have to know the specific place where you want to land and where the lighting is, as well as what expression and emotions you want to convey, in advance. Overall, it was great working with Kimble and the rest of the cast and crew on creating the stunts for the movie, and the overall filming experience was great!”

Cancel reply
The Lodgers Exclusive Clip Follows Actor Bill Milner Stopping at Nothing to Protect His Home
Adam Devine Fights Back in Game Over, Man!’s Official Trailer
To Top