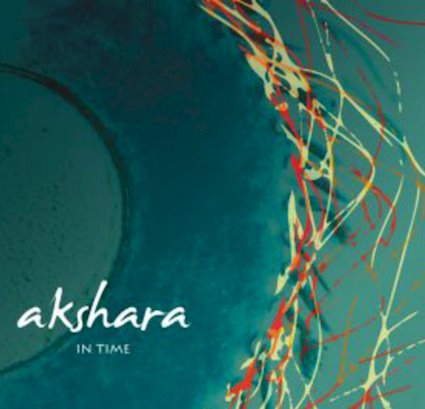 “In Time” by Akshara Music Ensemble

The debut album, In Time, from New York City-based group Akshara Music Ensemble, reaches deep into World Music by combining many different styles, like Jazz, Classical, and South Indian percussion, into one, cohesive experience for listeners from all around the planet. Akshara Music Ensemble breaks down the communication between various peoples to deliver a sound that is full of life and beauty.

In Time has been five years in the making since the group first got together to make music in New York City. The brazen and steady percussion beats of Bala Skandan on the Mridangam and Konnakkol blends very well with the classical violin work from Arun Ramamurthy and Trina Basu. On top of Dave Eggar and Amali Premawardhana’s magnificent cello work with additional percussion from Nitin Mitta on the Tabla, Akshara Music Ensemble comes together to perfectly weave world music, along with Jay Gandhi’s woodwind work with the Bansuri. In Time is a great example of how different styles and ethnic instrumentation can unite different peoples from all over the map.

The album starts off with “Mind The Gap,” a collaboration that builds a steady rhythm before it starts to get a bit more complex. Just at its peak, the string section comes it to make the sound more dynamic and full. It’s also very playful with its stops and starts, as you can clearly hear why it’s called “Mind The Gap.” The signature track on the album is “Mohana Blues,” which won “Best World Traditional Song” at the 13th Annual Independent Music Awards. The track infuse traditional a classical sound with heightened and elegant South Indian chants, while embracing the beauty of the group’s violins and cellos.

“Opus in 5” takes advantage of the group’s South Indian roots because it makes the Bansuri its centerpiece with a rich and distinct sound of the subcontinent. “Shadjam” marches on with a strong percussive sound and highlighted by the Bansuri from Gandhi and added Konnakkol sound from Skandan. It’s really amazing how these sounds just blend together so well, as it adds a lot of texture and movement to the group’s music.

The album ends with “Urban Kriti,” a track that feels like a steady downpour of hammered dulcimer before it explodes with Bansuri that’s layered underneath strong rhythms of the Mridangam and Tabla. There’s a really good sense of energy and excitement before In Time comes to a close.

While the album is very short, it only features five tracks, it’s full of memorable and deep tones that contribute to its overall pleasure and experience. In Time is a good example and introduction of World Music to someone who might not be too familiar with the genre or maybe just intimidated with non-Western cultures and sounds. The energy and true collaboration between musicians lends a lot to this listener’s enjoyment of Akshara Music Ensemble.

In Time by Akshara Music Ensemble is available right now on Spotify.