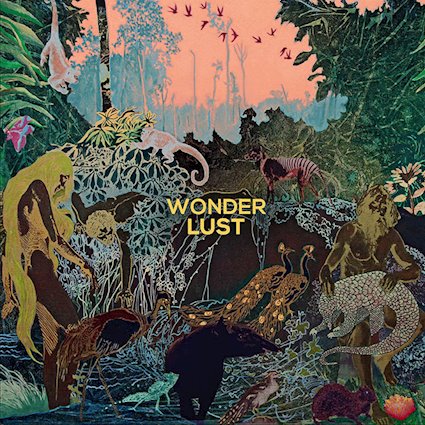 After releasing their debut album 44 in 2014, New Sincerity Works is just now hitting their stride, in terms of deeply effective songwriting and displaying genuine human emotions with their latest release, Wonder Lust. The Cincinnati, Ohio-based Indie Pop outfit managed to put together an album that celebrates their Midwestern roots and values in an infectious and amazingly layered release.

Leading off Wonder Lust with the track “I’ve Got You,” New Sincerity Works begins things with a series of bloops and bleeps in a synthesized build up with one-of-two outcomes: a pitch drop followed up by a dance beat, or acoustic guitars layered on top. Happily, it builds to the latter, as New Sincerity Works captures bright tones and a healthy dose of gumption to grab this listeners attention.

Through the album, New Sincerity Works reminded me of the best of Flaming Lips and New Pornographers in a sound that’s a complete throwback to Indie Rock from the mid-2000s and I love it! Not only in the sense of the band’s musical ambitions, but also with its lyrics and general tone of fusing honest feelings with super catchy sounds like in the songs “Just Like Vapor” and “Love To Love The Love,” which is so witty that it puts good use of a rhyming dictionary.

The song “Midwest Reverie” really puts Wonder Lust into perspective, as it firmly boasts the beauty of the state of Ohio with its natural rivers and lakes, green forests, and blue and open skies. “Without Us” speaks to the band’s affections for the music of Paul Westerberg, while “Find a Way Home” feels like the best of Broken Social Scene and Stars with lead singer Mike Tittel’s strong vocals and Lauren Bray’s memorable synthesizer and keyboard work.

“The Company We Keep” displays an honesty and liveliness that speaks to the band’s outlook and its name. “New sincerity is a legit postmodern aversion to cynicism and skepticism,” said Tittel on the band’s website. “It’s a movement of sorts. I thought this described my creative compass really well. I think the best songs are universal and descriptive of genuine emotion, so the name fit my idea of this project.”

The album’s title track enjoys an upbeat and exciting tone that feels like early Wilco in a wonderful sing-a-long fashion that will have you swaying back and forth with a smile on your face. I mean, it’s the best way to describe how New Sincerity Works can make a listener feel with every track that goes by on the album. “To Be Kissed Like That” and “Hearts Transplanted” show off the band’s ability for songwriting and arrangements, which would seem a little hokey and clumsy in lesser hands.

I can’t help to be quite taken with New Sincerity Works and their latest album. It fits in with almost everything you’re looking for in a good indie pop band. It feels like a true collaboration of musicians, while also delivering a uniqueness in sound that somehow also feel uniform. The band puts its heart on its sleeve and in these cynical and trying times, it’s a breath of fresh air and simply works.

Wonder Lust by New Sincerity Works is available now on Spotify, SoundCloud, and Bandcamp. For more info, check out NewSincerityWorks.com.