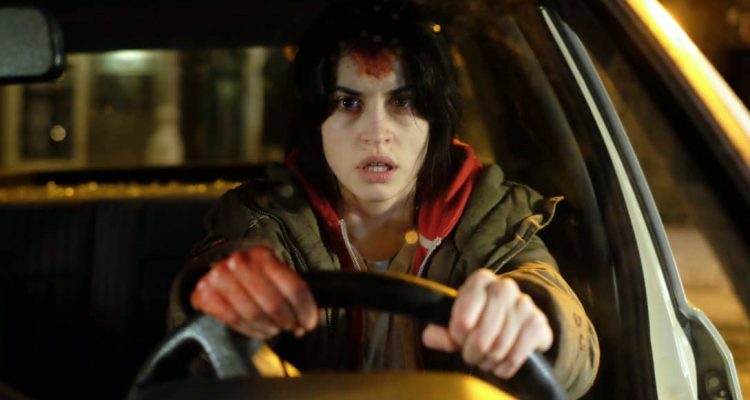 Photo from the film “Cold Hell”.

Given the way that some DACA immigrants are shall we say shuddering from our president’s cowardice in holding up a citizenship track for them, it’s refreshing to watch a Turkish woman, now an Austrian citizen, kicking butt both in the Thai boxing ring and in her vigilante campaign against an extremist of her religion.  “Cold Hell,” or “Die hölle” in the original German title stands, for the harshest punishment available to alleged miscreants after death: a punishment double whammy of extreme heat and bitter cold for those who do not repent.  According to the lunatic at large in several Middle Eastern countries and now in Vienna, any female sex worker is a whore deserving of the same punishment on earth that she will purportedly get in hell.

“Cold Hell” is a true thriller whose car chases are not thrown in just for random excitement but whose every action shot is motivated by an authentic search for this killer: a man who has slit throats and tortured not only a number of adult women but who has his eyes set on a three-year-old girl as well who he considers a future slut.

Stefan Ruzowitzky, known for the terrific 2008 movie “The Counterfeiters”—about Operation Bernhard, the largest counterfeiting operation in history during World War II designed to crash the British pound—apparently does not shy away from movies that mean something; films that transcend thriller conceits in favor of teasing out spheres affecting communities at large.  In his current movie, to open on Shudder.com March 15, 2018, he sets his sights on a fellow with a responsible government job in Vienna who kills women in his spare time and who is being hunted by the local polizei but more effectively by the story’s kick-ass heroine.

You need not fear that the pace will be slow: it moves.  Rapidly.  At the same time it sheds a light on fanaticism not too unlike the radicalism facing Europe today as Italians, French, Ukrainians, and Brexit-loving British rebel against what they consider immigration policies that have gone too far.

Principal focus is on Özge Dogruol (Violetta Schurawlow), a cabbie who is a tough as she looks, though in just one situation she is able to show her more delicately feminine side.  This Turkish immigrant—who identifies herself to police not by her ethnic roots but by her Austrian citizenship–witnesses a brutal torture-murder of her prostitute neighbor.  She realizes that the killer has seen her face and is determined to have her join his coterie of the slain.  This proves to be a worse problem than dealing with the racism and sexism of her passengers.  When her estranged family denies her a domestic witness protection harbor, she runs away with her murdered cousin’s little daughter Ada (Elif Nisa Uyar), gaining rapport (and more) from detective Steiner (Tobias Moretti), who shares his flat with a senile father (Friedrich von Thun).

Domestic situations abound. Özge watches the detective take care of his father, directing him to the bathroom when hehas had an accident and heating a milk bottle for the girl (which the father drinks instead).  A sexual liaison between Özge and Steiner almost comes from another movie but here director Ruzowitzky has set the scene appropriately, making the lovemaking credible.  With Steiner acting as virtually a one-man police force racing the clock when the identity of the killer is known, the film is set for a wild climax around Vienna’s Ringstrasse.

You can already picture Schurawlow on the way to big, albeit not necessarily better, thrillers is Hollywood should the big studios see fit to sign her up.  But let’s hope that the Me Too movement does not equate liberation with smashing men as she did against a sparring partner, a fight that has her using her elbows against the rules and getting her banned forever from the boxing ring.