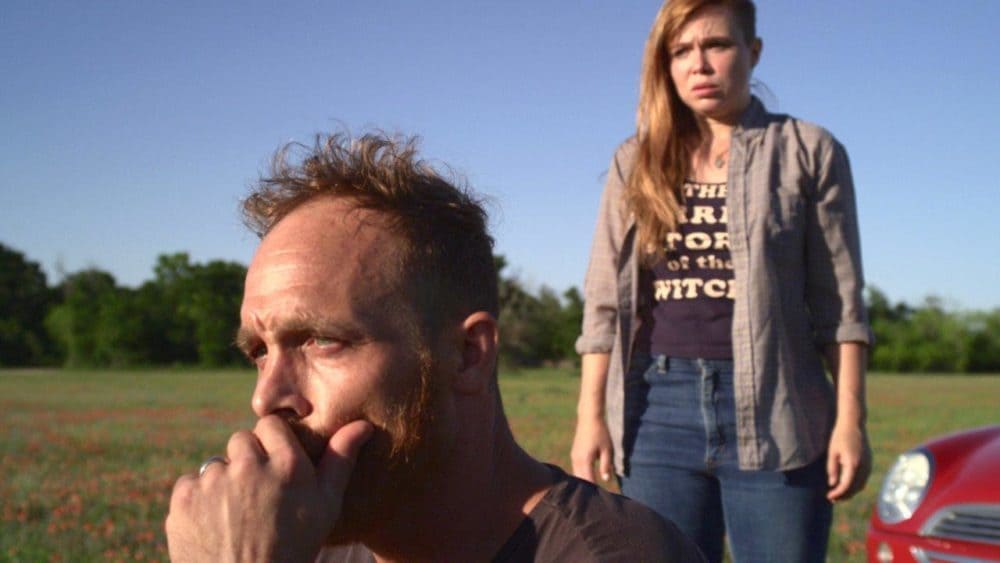 People often appear to have a gratifying life to their peers, but the outside world doesn’t always see or understand the true troubles that others are experiencing within their personal ad professional lives. That’s certainly the case for the clothing-addicted protagonist in the new psychological horror movie, ‘Fashionista.’ Actress Amanda Fuller naturally understood the emotional struggles her lead character is contending with in the mind-bending mystery thriller drama. Since the gripping events in the film aren’t told chronologically, the performer related to the deteriorating mindset of her troubled hero, whose relationship with her seemingly perfect husband, who she shares her prosperous clothing business with, is anything but impeccable.

‘Fashionista’ was written, directed ad produced by Simon Rumley. The movie is now available On Demand and iTunes, courtesy of Freestyle Digital Media, after it played at more than 25 festivals including Fantastic Fest, Sitges, Fantasia, Busan, Tallin, Sydney and Frightfest London.

‘Fashionista’ follows 30-something couple April (Fuller) and Eric (Ethan Embry), who run a vintage clothing business. But while business is booming, cracks are showing in their personal relationship.

When April’s growing fears about Eric’s infidelity prove true, she begins an affair with sharp-dressed playboy Randall (Eric Balfour), a narcissistic control freak with a chic modernist mansion and some pretty extreme sexual appetites. She begins to attend Randall’s sadomasochistic sex parties during their affair, in order to feel appreciated and loved. But as she tries to cope with her life as it spirals out of control, it becomes more difficult for her to separate real events from the paranoid hallucinations that she begins experiencing.

As a result of her unconventional and menacing relationships with her husband and lover, April seeks refuge through her fetishistic obsession with clothes. With the narrative spliced with visions and fragmentary flash-forward premonitions, the protagonist must face reality and find a way to get her life back on track, before she completely loses herself.

Fuller generously took the time to talk about starring in ‘Fashionista’ during an exclusive phone interview. Among other things, the actress discussed how she was drawn to play April after Rumley sent her the script, which provided her to play a creatively ground-breaking and challenging protagonist. She also revealed that she knew that it would be challenging to showcase April’s emotional descent while they were shooting her scenes out of sequence on an independent schedule, but she embraced the experience of highlighting the character’s passionate journey.

The conversation began with Fuller explaining how she become involved in the film, and what attracted her to the role of April. The actress, who previously worked with Rumley on the 2010 thriller, ‘Red White & Blue,’ said she knew the filmmaker “was working on a new project, and he sent me a version of the script. I loved it, but it was more of a supporting role for me. He wasn’t entirely happy with the story, so he was still working on it,” the performer shared.

“During that process, I think he got enough feedback to realize that he wanted to work from scratch. So he said, ‘Why don’t we work together?’ We trust each other, so he decided to make (April) the main character. Then about a month later, he sent me the updated version of the script, and I read it and was blown away,” Fuller divulged. “I was craving the opportunity to do something creative, ground-breaking and challenging, so it was perfect timing for me.”

Once the actress agreed to take on the role of April, she began preparing to play the troubled protagonist. “I did research into women who have this addiction with clothing, which isn’t something that’s widely talked about. Once I began digging into it, I started to realize that there is a presence of support groups for it online. It was fascinating to me to find the parallels it has to other addictions, as well as how people deal with loss, insecurities and life struggles,” Fuller explained.

The performer also did research into metal illness, which she said was helpful in connecting to, and understanding, her character. “I worked on figuring out her entire journey, especially since the story’s told in this non-linear way. It was really important to piece together the story, from beginning to end,” Fuller noted.

“I knew that once we started filming, we’d only have 18 days to film all of the scenes, which included over 150 costume changes. I knew that process would be crazy,” the actress added with a laugh. “So I knew I wouldn’t have the time to start to figure out where (April) was at in every scene once we began shooting.”

Getting the clothing together for the protagonist was also helpful for Fuller to relate to her character. The performer admitted that “half of the clothing in the film is mine, and the other half was brought in by our wonderful costume designer, Olivia Mori. So working with her on creating April’s looks was incredibly helpful, and also a lot of fun!”

Before principal photography on ‘Fashionista’ began, Fuller also sat down with “Simon in my home in L.A., and hashed out the script together. We clarified everything, and worked on the relationship between (April and Eric), and created a backstory for them,” she shared.

Since the actress had previously collaborated with Rumley on ‘Red White & Blue,’ her experience of reuniting with him on ‘Fashionista’ helped her relate to her character. Fuller called the filmmaker “a genius, who has a brilliant mind! He’s fearless, and that’s what I look for in storytellig. Having the experience of working with him on ‘Red White & Blue,’ which was the scariest thing I had done in my character at that point, really helped me with his film. Since my character (in ‘Red White & Blue’) was so raw, if making that movie wasn’t a positive experience, I may not have been able to make this film,” the performer admitted.

Fuller added that working with Rumley on ‘Fashionista’ was different than their previous project, because “I have grown up a little bit, and now have more of a backbone now. I think I challenged things a bit more, just to make sure that everything was being done the best way we could do them.

“But I’ll always want to work with Simon, and I trust him wholeheartedly,” the actress also expressed. “At the same time, he trusts and respects me enough to allow me to bring myself to the role. He also knows me well enough to know what I can bring to a project.”

With the psychological horror film also starring Embry and Balfour as the two men who April is romantically entangled with, and the drama being such an emotionally-driven story, Fuller worked with her co-stars to build their on-screen relationships. She mentioned that they didn’t have much rehearsal time together, but she already knew Embry from their 2013 crime comedy-drama, ‘Cheap Thrills,’ as well as through mutual friends. “We didn’t have any scenes together in that film, but I somewhat knew him from the promotional process and film festival circuit,” the performer explained.

“So I kind of took a risk when we were looking for (an actor to play the character of) Eric. I got his email (address) and sent him a message that said, ‘We need someone as brilliant as you to make this film work.’ Luckily, he agreed to take the role. He also spoke to Simon, and they got along. So we met in L.A. a few weeks before we started filming, and read through all our pieces in the script, and built our backstory. Other than that, we didn’t really see each other until we were at the airport, and we were headed to Austin,” Fuller admitted with a laugh. “We were like, let’s do this! It’s going to be a roller coaster!

“But Ethan’s one of the most open, generous and loving spirits. It’s so comfortable to be around him. So for me, there was no need to really get to know him, because we immediately felt connected. He’s also really smart, so we were able to work out all the kinks for a film that had such a short shooting schedule. It was imperative that we had someone like him to help figure everything out,” the actress also gushed while further discussing her working relationship with Embry.

Fuller then delved into what her experience of collaborating with Balfour on ‘Fashinista.’ “Eric joined the production during the third week of shooting, and I had never met him before,” she admitted with a laugh. “I think we initially had someone else attached to play Randall, but they fell through, so Eric was a last-minute cast. Eric and Ethan already knew each other, but only had one day where they were both in Austin while working on this film. Then Ethan was gone, and I was working with Eric, and the whole dynamic shifted.

“But Eric’s also someone who you’re immediately charmed by, and he’s so open. When the dynamic shifted, it kind of reflected the story, in a weird way. I felt like we were making a different film,” the performer also confessed. “So it was fun to experience that arc with both of them. I couldn’t have been luckier than having Eric and Ethan as my co-stars! I don’t know what I would have done without them!”

Fuller then followed up on ‘Fashionista’s story being told in a non-linear way. Since the actress is in nearly every single scene in the drama, she explained how shooting a story that’s told out of sequence influenced the way she approached portraying April. With a laugh, she revealed that “The process was insane! It was discombobulating, disorienting and surreal. I knew that it would be that way going into the production. But it’s one of those things that even though you know about it before you go into it, it’s still challenging when you actually do it.”

The actress added that “Luckily, I had a team of people around me who were on it, and helped me figure out where every moment was. My brother (Jeff Fuller) was the first AD (Assistant Director), and he knew the schedule, inside and out…He figured everything out, but that’s not to say that I wasn’t losing my mind!” She also noted that because “I did know the story so well, and connected with April, Simon was able to craft the story into something that’s so great.”