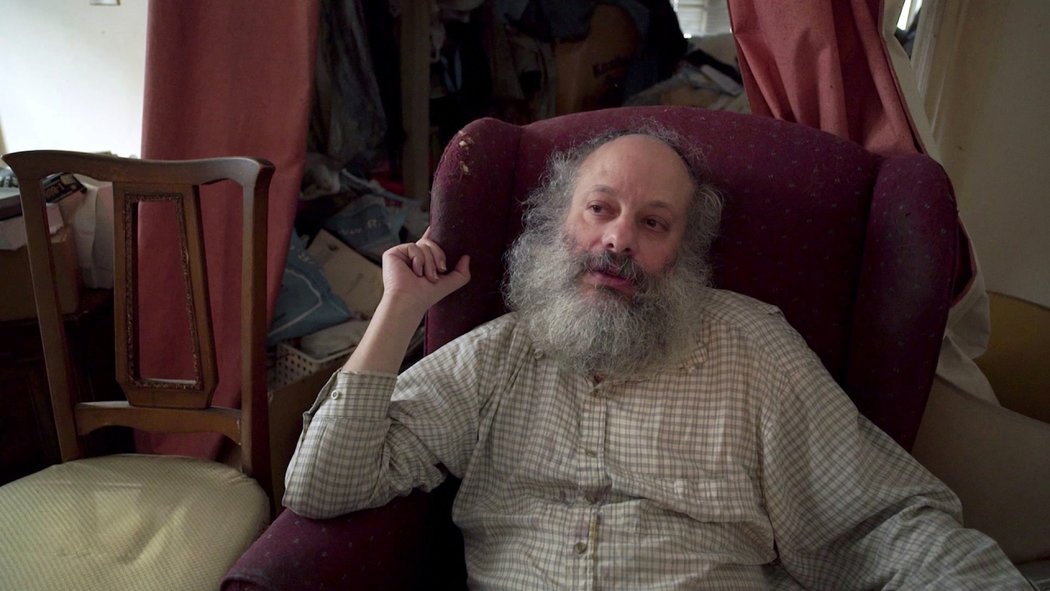 Photo from the film Thy Father’s Chair.

When you really dislike a film, perhaps the worst insult you can throw its way is that “it’s like watching paint dry.” How about a film that’s about a crew’s cleaning out a filthy house in Brooklyn? It’s tempting to say the same, but Spaniard Àlex Lora and Australian Antonio Tibali deliver a documentary that at first appears like an instructional film for house cleaning trainees. However given the rich conversations that they evoke while at the same time avoiding interviews, often the worst part of documentaries, they give us a rich, fly-on-the-wall look at two brothers, Abraham and Shraga, who worship in a Hasidic synagogue though not quite Haredim themselves. Whether we come out of the brief seventy-five minutes understanding why this pair have filled their inherited home with the detritus of years is debatable. I’m guessing that since their mom and dad died, they did not want to lose memories of their beloved parents. This may explain why they kept the books intact, though some were not picked up in years (a set was upside down). But why keep stuff that they picked up during the past months and years including trash bags from the supermarket, bedbug-infested mattresses, crumbling newspapers, and sour milk, plus some strange mixture in a pot, all of which smelled to high heaven (perhaps not the best word to describe it) as did their rooms?

In fact the twins, especially the more highlighted Abraham (two minutes younger than Shraga), call a professional clean-up crew when their upstairs tenants threaten a rent strike, complaining about the stench and maybe about the pereginating roaches that they would inevitably inherit if they had not already been so visited. Like the stereotypical little old ladies who fill their homes with cats, Abraham and Shraga have the neshama to open their abode to the lucky felines, who did not seem to mind the filth and stench at all. In fact in the movie’s most ironic scene, one of the nameless kitties spends her entire screen time cleaning herself on one of the several mattresses that the brothers had collected.

Abraham sports a huge gray beard and speaks English throughout without a trace of a Yiddish accent (there’s a touch of Brooklynese in some of the words, though), even chatting with his brother in English. He is of course fluent in Hebrew, delivering an all-too-brief, mellifluous concert from a Jewish scroll. Yet while Hanan, the Israeli head of the cleaning agency, professes his atheism, he is probably be surprised that Abraham, with all the trapping of Orthodoxy, labeled himself agnostic. He uses the word “God” two or three times, a practice considered taboo outside the synagogue by Orthodox Jews, who refer to the Deity instead as “Hashem” or “Adoshem.”

You of course know the directors from their movie “Godka Circa,” a ten-minute look at one Alifa, who looks up at the Somai sky, contemplating her life as a shepherdess, and knowing that some time soon, her life will change. The theme is obviously present in “Thy Father’s Chair,” since the brothers are about to embark on a new phase of their lives.

Hanan, who invades the house, finding the toilet packed with schmutz (probably not kept so in remembrance of the occupants’ parents), works with an a group of understanding Black employees, who take a week, maybe more, turning out a spacious abode that portends a new beginning for the brothers. Or does it?