Using creative expression as a catalyst for change in the arts, especially on screen, is an essential element that any filmmaker must embrace in order to succeed. Leading audiences through the process of welcoming such revolutionary adjustments in the status quo is a vital element to The Lagralane Group. The corporation is a collection of artists, financiers and creative investors who strive to bring diverse and truthful storytelling to audiences through strategic film financing. The group was co-founded by actors, philanthropists and spouses, Jason Delane Lee and Yvonne Huff Lee, who aim to support uncommon voices, courageous visionaries and inspirational storytellers in their movies.

The husband-and-wife team lead The Lagralane Group to highlight the exploration of honest, raw and uncompromising human experiences in their films. Their current movie projects include the Sundance Film Festival selections ‘Bisbee ’17,’ ‘Dark Money,’ ‘Inventing Tomorrow,’ ‘This Is Home,’ and ‘Won’t You Be My Neighbor?’ The company’s co-founders served as executive producers on the Oscar nominated documentary, ‘Icarus,’ as well. The Lees have also worked on the movies ‘Lucky’ and ‘Served Like a Girl,’ which both had their world premieres at SXSW.

The Lagralane Group co-founders generously took the time the day after they participated in the panel, ‘Investing for the Future: Inclusion is Key,’ at this month’s SXSW to talk about their company during an exclusive interview at the InterContinental Stephen F Austin hotel. Among other things, the couple discussed their process of achieving their goal of elevating cultural consciousness through film. They also mentioned that they enjoy attending festivals like SXSW and Sundance, as they not only allow filmmakers to reunite with their former collaborators and celebrate their work, but also offers them opportunities to create new connections that help them achieve their latest goals.

ShockYa (SY): Together you created The Lagralane Group. What inspired you both to launch the company, and what do your roles as co-founders of the group entail?

Yvonne Huff Lee (YHL): Well, we’re both actors, and there came a point where we were trying to balance our careers with our family.

Jason Delane Lee (JDL): We have three young kids, so as our family grew, we knew we had to change the game.

YHL: A script came our way, which pushed us into wanting to form our own LLC. From there, we decided to start branding our company. So we found a bunch of actors who wanted to invest in the narrative space.

JDL: With the script that Yvonne’s referring to, that project created the legal framework in 2014 that created the LLC, which has since become our company. So we’ve been calling ourselves a film finance and development company, both from the actor and legal perspectives.

The lawyer who we worked with to create the LLC introduced us to a documentary film collective, the Chicago Media Project, which introduced us to the doc space. That knocked the actor hat off, in support of doc filmmakers.

YHL: So as we started, we wanted to be in the actor space. But as Jason said, the doc world had changed so much over the past two years. So we’re now primarily investing in independent films, and we’ve turned to developing a lot more projects. Our company’s name is actually a merge of our middle names.

YHL: She would call them Lagralane events.

JDL: That name has stuck with us. It’s meaningful for us, because of the family legacy element of it.

SY: Like you mentioned, documentaries have changed over the past couple of years. What is it about the genre that you enjoy working in it? How have documentaries improved recently?

YHL: Documentaries have figured out how to look and feel more cinematic now, as opposed to just remaining full of talking heads who are educating you on something. The visual form of documentaries has also changed-you can now use elements like animation, live art and dance, which change the way people consume this genre.

JDL: I also think the newer platforms, like Netflix, Hulu and Amazon, have completely changed the game since 2011. Instead of walking past the documentary section in Blockbuster, like we all did, 10-15 years ago, this explosion of the new streaming platforms has made the genre more accessible to viewers.

YHL: Docs now are more entertaining. We were co-executive producers on ‘Icarus,’ which is a great example of how one person’s simple story has become a global story. What Bryan (Fogel), the director, was able to do was allow viewers to feel how the film’s subjects were able to make fast-paced decisions.

SY: Also speaking of producing, how did you both become interested in working as producers on projects such as ‘Icarus?’

YHL: Our COO, Matt Soraci, was actually the first person who watched the rough cut of ‘Icarus,’ and he brought Jason to see it.

JDL: I’m a big sports and political fan, and like to be knowledgeable about what’s going on around the world. ‘Icarus’ came to us through our connection to the Chicago Media Project. We went to an early advanced screening of the film, and we signed on to help finish the production on it. They were looking for finishing funds in 2015.

We also went to this nondescript warehouse office that Bryan was working in in Santa Monica, and we saw the movie again on his laptop. As we were leaving, we were looking over our shoulder and thinking, are the Russians across the street? It’s a dynamite story that left an effect on us. It was inspired by (Fogel’s) hero, Lance Armstrong, and (the director) got the initial funding to shoot a doc about doping himself, to see if he could pass the tests. We’re in shock and awe of the story, which is full of twists and turns.

YHL: It asks the question of how can one man’s journey can change and affect the way we look at the world, which is basically what he’s done.

JDL: It’s been very exciting. Last year, we had three movies here at SXSW, and one of them was our narrative, ‘Lucky,’ which was (actor) Harry Dean Stanton’s final film. Yvonne also had a role in it. John Carroll Lynch did a fantastic job directing it. We’re proud of it. The other two films that were here were docs, including ‘Step’ and ‘Unrest.’

We also had seven films at Sundance this year, including six docs and one narrative. The narrative was ‘Night Comes On,’ which was directed by Jordana Spiro.

We love film festivals, and have always been coming to them, as supporters of movies, as well as actors. We also support our friends who have films playing at the festivals. We love the inspirational element of it.

YHL: I always get inspired by film festivals. It’s exciting to see teams who are happy to come back together, after spending many months apart, after they stopped filming. I love SXSW, especially the merging of all the mediums. It’s great to see everyone having conversations they wouldn’t have otherwise had.

JDL: We’re so inspired by film festivals. I wrote a short film that’s inspired by the movies that we saw in 2008 at Sundance. The film that I wrote is now in development. We have a second draft that we’re working on with Lagralane, and it’s called ‘Lifeline.’

SY: Are you both interested in also producing and acting in films that focus on women’s issues?

JDL: Well, Lagralane was created organically, and its name is a combination of our middle names, like we mentioned before. We have projects that we’ve made and been introduced to that we call Lagra projects and Lane projects, as well as Lagralane Group projects. We’ve been married for many moons now, and really support each other. I’m in complete support of her Lagra projects, as I know she is of me when a Lane project presents itself.

YHL: ‘Icarus’ and ‘Trophy’ are documentaries that are Lane projects, for example. Then on the Lagra side, we invested in docs like ‘This Is Home’ and ‘Inventing Tomorrow.’

Then we share projects like ‘Night Comes On,’ which Jason spoke about earlier. Since he was adopted, the landscape of that movie spoke to us. It’s set in the world of foster care, and he was in foster care for a short time.

JDL: So films like that speak to us, personally.

YHL: One of the missions of our company is that not only do we answer the questions that we have about what’s happening in the world, but also how we can we tell the truth. We’re interested in those conversations. So putting women and people of color at the center of the story in front of the camera, as well as behind the camera, is very important to us.

JDL: It’s important to continue advancing the narrative of giving jobs to the most talented person. We want to put cameras in the hands of everyone, so they can all tell their story.

YHL: Having that very clear focus is important to us. We’ve been able to tell so many diverse stories, and that focus doesn’t limit what we do. We just have to be clear about who’s telling the story.

SY: Are there any other projects that you’re both currently working on, whether as actors, producers or both, that you can also discuss?

JDL: In the doc space, we have an untitled movie that Roger Ross Williams is directing, and it’s about the story of the Apollo Theater. It’s one of the first projects that we became involved with at the inception of our company. It’s taken some time for the development of the story to move forward, but the film should be completed by the fall. We’re very excited about it. I’m also on the board for The Classical Theatre of Harlem, so I do some Shakespeare (in) Uptown (Manhattan). The historical element of the Apollo during this changing time Uptown is exciting.

YHL: We also have our first narrative feature, ‘Lifeline,’ which we’re working on, and developing, now. It’s based on Jason’s adoption story. We asked Richard Kahan, who was one of the producers on ‘Lucky,’ and is also a writer, to write the script for us. We also have a film called ‘A New York Story,’ and we’re currently developing the story.

JDL: We’ve always called ourselves a film finance company. During the first two years after we started Lagralane, we completely focused on the finance side of filmmaking. It was an extraordinary ride that took us to the Oscars. We’re proud of all the connections we made during that time. But now we’re taking that energy, and turning it towards developmental, in-house projects. 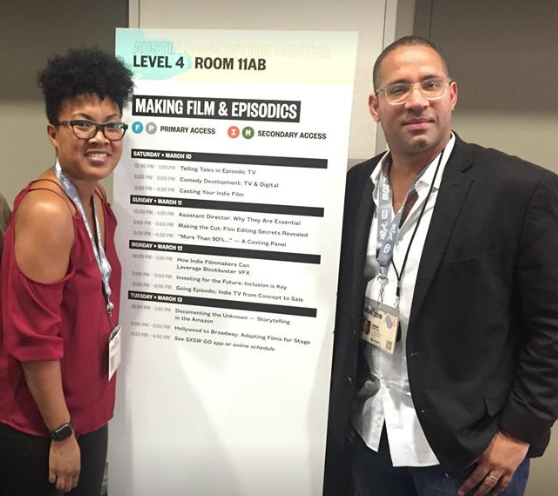