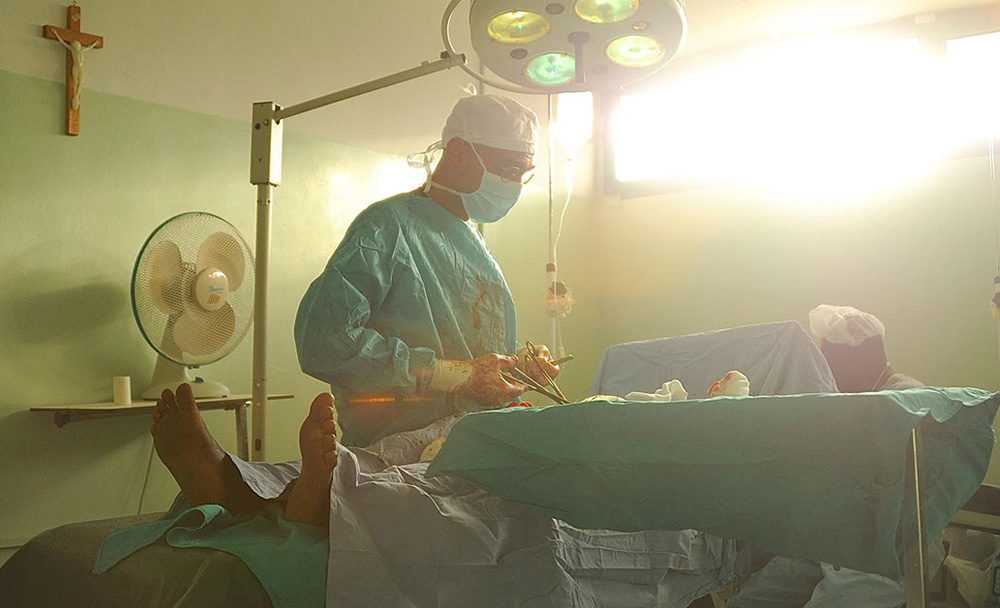 Photo from the film The Heart of Nuba.

Sudan is a hell-hole like Syria but somehow the evil inflicted on civilians has failed country has failed to capture the attention of the media. People are getting slaughtered at numbers that make our own violence seem as though the strongest weapon our own citizens hold is a cap pistol. The man behind the slaughter of his own people—just civilians no less and a great many children—has been the country’s dictator since 1989. How does he gain by bombing an area that looks like a wasteland? According to Kenneth A. Carlson who directs and whose 2001 feature “Go Tigers!” about a high school football team in the rust belt where football is virtually the location’s identity, takes on the genocide in that mountainous land inhabited by Black Africans. That’s quite a change, and in fact if you compare the Amsterdam, New York home town and family life of the movie’s principal character, Dr. Tom Catena, you would conclude that what Catena did is something that maybe one person in a million would attempt.

Tom Catena, who enjoys a rich family life in upstate New York which we see during his rare R&R visit, has dedicated his life to the people of a Sudanese village under constant attack from Omar al-Bashir, who is killing his own civilian people to drive them out of an area rich in mineral resources. A star nose guard for Brown University, he was looking forward to a lucrative career as an engineer when he realized that medicine would be a better fit. Rather than hit his father for the money, he enlisted in the military, which took care of the expenses. Then it was off to practicing in the slums of Nairobi for Catena and ultimately to the Nuba mountains of Sudan. His headquarters became the Mother of Mercy hospital where he is the only doctor for 250 miles.

With Curt Apduhan’s lenses capturing the open vistas of the Nuba people—Muslims, Christians and followers of traditional religions living together—we in the theater audience watch in horror as dictator Omar al-Bashir’s fighter jets launch attacks. When the children under the watch of Catena and others who will inherit Catena’s tasks in 5 or 10 years hear the shrieks of the jets, they run for cover to makeshift foxholes, their eyes widened in fear. As if that’s not enough suffering, a measles outbreak pushes the sick into a tent city.

Catena gives us a close-up look at the surgeries he has to perform, as he fits into fields that would be covered by a host of doctors with different training in the U.S. He shows us the arms of a leper, and takes us into a primitive theater of surgical procedures including a case of a young child whose entire kidney and part of his other one had to be removed because of cancer. One young lad hobbles around missing an arm and a leg from the bombings, ineligible for prostheses because the amputations leave no stump to attach them.

There’s good and bad in every individual, goes the expression. But try to find a single element of imperfection in Catena and a single element of goodness in al-Bashir, and you’ll wonder at the way the international community looks away from the war crimes of the latter. This documentary is a stunning example of humans in their magnificent and vile forms, making us wonder about the nature of man.