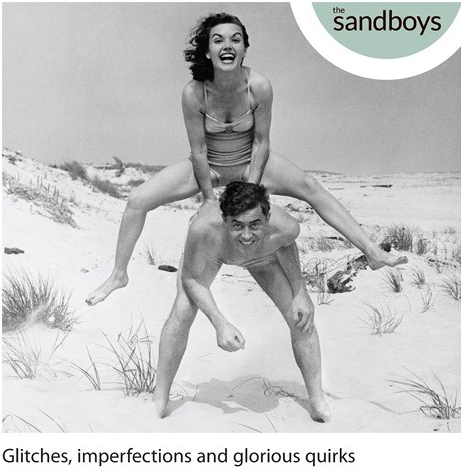 The cover for The Sandboys’ cellele-inspired EP, ‘Glitches, Imperfections and Glorious Quirks.’

Facing the philosophical crossroads of taking the path of least resistance, or the highway of persistence, is a major dilemma that musicians often face as they ponder whether or not to continue on their creative journey. Northern British band, The Sandboys, initially struggled to overcome their anonymity, and gain a following on the club scene in and around their native Newcastle. But over the past few years of searching for their true identity, they discovered how unique and emotive of a sound they could make with such eclectic instruments as the cello and the ukulele, which is stunningly featured on their new six-track EP, ‘Glitches, Imperfections and Glorious Quirks.’

The musical duo, which is composed of singer-songwriter and guitarist, Mark Miller, and Ben Harrison, who plays the cello, branded their sound with the name cellele. The British band is triumphantly bringing their new style of music across the Atlantic Ocean to the U.S. with ‘Glitches, Imperfections and Glorious Quirks.’

The group’s introduction to the American music scene begins with one of its best entries, ‘Wish For The Best.’ Beginning with a simple trumpet and ukulele, the bandmates set the tone for a retro-fueled song that commandingly features a stunning mix of the cello, piano and light percussion. Miller also enthrallingly croons that people can’t have too much of a good thing, so that they shouldn’t waste time on being careful on what they wish for as they strive to achieve their dreams.

‘Glitches, Imperfections and Glorious Quirks’ then transitions into its sophomore song, ‘Drive You On,’ which also contains a retro and fast-paced feel to it. Combining jazz, blues and folk musical influences in the vocals and instrumentation, Miller questions if people are determined to succeed, or if they’re just happy to concede to what others want of them. He also encourages his listeners to ponder if they want to have a set destination in where they’re gong next, or if they will remain stuck in past.

The third track on The Sandboy’s latest EP is ‘Count Me In,’ which features a distinct and different vibe from its two predecessors. The ska-influenced tune pays homage to the popular British Two-Tone style of the 1960s and ’70s. Also intriguingly backed by jazz-infused drum beats and horns, Miller croons that he wants to help the people in his life, but only if they want his assistance.

‘Glitches, Imperfections and Glorious Quirks’ then delves into one of its best entries, ‘Like I Used to Be.’ The contemporary folk-rock song features a strong harmony in Miller’s lyrics, which inspiringly encourage the band’s listeners to not settle for second best. Backed by an upbeat, commercial radio-friendly instrumentation that largely focuses on the ukulele, the singer croons about how he should introduce the woman he was once romantically involved with to one of his friends, but warns that their love is completely different.

Miller and Harrison then delve into the thought-provoking and philosophical track, ‘Path of Least Resistance.’ The slow simmering ballad continues the musicians’ unique blending of genres, including pop and rock, which are backed by an exotic blend of the electric guitar and the accordion. As the tune slowly but interestingly builds up its energy, the singer ponders whether the road they choose to take in their pasts was the right one for them, and if they have truly learned from the conflicts in their lives.

The last song on The Sandboys’ latest EP is ‘More Than Enough,’ which features a quirky blend of the ukulele, cello, organ and trumpet that serves as the joyous background for the all-important message that material things aren’t the most meaningful aspects in life. ‘Glitches, Imperfections and Glorious Quirks’ is brought to a stunning and upbeat end with the track, on which Miller proclaims that the love of the woman he’s involve with means more to him than material things and money.

Contending with the philosophical crossroads of taking the path of least resistance, or the highway of persistence, is a major dilemma that musicians often face as they ponder whether or not to continue on their creative journey. That was certainly the case for The Sandboys, as Miller and Harrison were initially struggling to overcome their anonymity, and garner a following in and around their native Newcastle in Northern Britain when they first began playing together.

But while searching for their true identity over the past few years, they discovered how emotive of a sound they could make with such eclectic instruments as the cello and the ukulele. That unique blend is enthrallingly featured on ‘Glitches, Imperfections and Glorious Quirks,’ which is rightfully helping to secure their fanbase in both America and Europe.