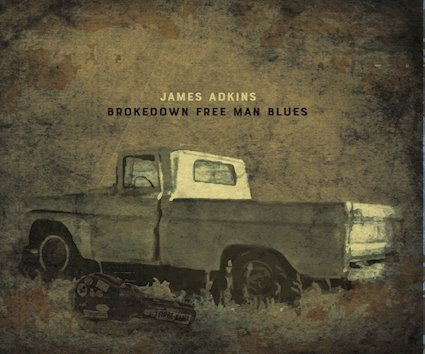 Former lead singer and primary songwriter for the Big Virginia Sky, James Adkins broke away from the Hampton Roads, Virginia-based Americana band to write and record the solo album Brokedown Free Man Blues. As a collection of songs Adkins wrote in a transitional period in his life moving from Virginia back home to Northwest Ohio, the singer/songwriter is getting back to his bluegrass and folk roots with the new record, and boy, does it work for me!

Brokedown Free Man Blues kicks off with “ Don’t Say Goodbye,” a pleasant folk tune with clever noodling and melodies about the last gasps of a relationship and a final plea for reconciliation. It’s followed up by “Oh Lord Virginia,” which definitely feels like a transition from one point in life to another. And considering the themes and approach Adkins took with the new albums, it seems very appropriate.

The album’s title song, “Brokedown Free Man Blues,” is a bluegrassy song that goes from city life to the country with very fitting banjo and fiddle parts to complement Adkins’ ernest voice and lyrics.

“This album is a collection of songs that I wrote over a transitory period in my life,” explained James Adkins about the approach of the new album. “A couple of the songs came from where I grew up and started my professional musical career in Pensacola, Florida. Another couple songs came from the Tidewater area of Virginia where I worked with some of my best musical friends and cultivated my songwriting style. Most were written from my new home in Northwest Ohio, and still others were written from the road in between.”

The standouts on the album are “Madly On (Mad Leon),” which is a epic ballad about a world that keeps spinning despite deep-seeded passions, and “Hard Road To Go,” which feel like the a normal day in the life of someone just trying to get by. While I’m pretty positive on the album, these songs (along with “Don’t Say Goodbye”) perfectly sum up Adkins’ heartfelt themes and songwriting style.

Overall, Brokedown Free Man Blues is almost like a musical that’s full of honest emotions conveyed through song. Something that you can also just sing-along during the first time you listen to it because it just feels familiar and warm, which comes from James Adkins’ raw, yet clever songwriting that illustrates the humdrum parts of life in a nice piece of storytelling from track 1 to track 10. It feels like a complete experience of someone’s life.

For more info on James Adkins and Brokedown Free Man Blues, check out his website and Facebook page.