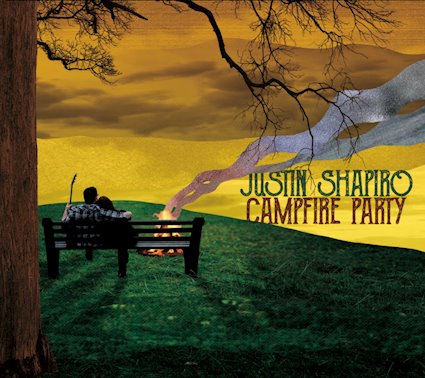 Hailing from Washington D.C., Justin Shapiro has made a name for himself in the local cover band scene. He performed with the likes of bands that cover songs from Neil Young, Bob Dylan, and Paul Simon. While Shapiro also started a band of his own called Green River Junction with drummer Rich Cairns and bassist Derek Wiggins, the trio ultimately fizzled out when members moved away from the nation’s capital. However, Justin Shapiro is making his own mark with his solo debut “Campfire Party,” but sadly, it’s a real stinker!

Starting off with the album’s opener “Lost In Time,” Shapiro displays no sense of witty lyrics or original themes. It just seems very well-worn and trite. It’s not the subject matter — there are plenty of love songs out there about men loving women — but it’s just the way that it’s delivered, which is so cheesy and cornball that Mr. Shapiro has the makings of a good afternoon snack instead of a hit song here. It’s just bad, but I like the slappy bass though.

The rest of the album is full of uninspired trash that only belongs in open mics in drab midwestern taverns. I mean, it sounds like a jam band from old dad’s who don’t seem to know that only Dave Matthews can pull off music from the Dave Matthews Band. Everyone else who tries should just relegate their music to dark corners of small town bars.

It’s repetitive, shrill, eye-roll worthy, and completely disposable. Off-key and reaching, I mean, c’mon, “Mr. Bluebird?” What are we trying to do here? A song about how inspirational birds are? Bluebirds are a metaphor for freedom? This is tacky postcard material. You throw a stamp on it and send it to a friend, but ultimately it has no meaning. It’s just nice and inoffensive. And if you ask me, that’s the worst thing you can be if you’re trying to create something, especially music.

I can go on, but I don’t want to waste your time like listening to this album did for me. I will say, I actually like the song “Stand,” it has a nice feeling and groove. It suits Shapiro’s voice and it does display an honesty that the rest of the album lacks. And I also liked the hook for “Campfire Party,” but lyrically it’s too simple and mundane to even be considered. It’s like a high school band, in terms of songwriting, performance, outlook, and execution. Overall, it’s just weak sauce. Nice try, Mr. Shapiro, but don’t quit your day job.

For more info on Justin Shapiro and “Campfire Party,” check out his website here.