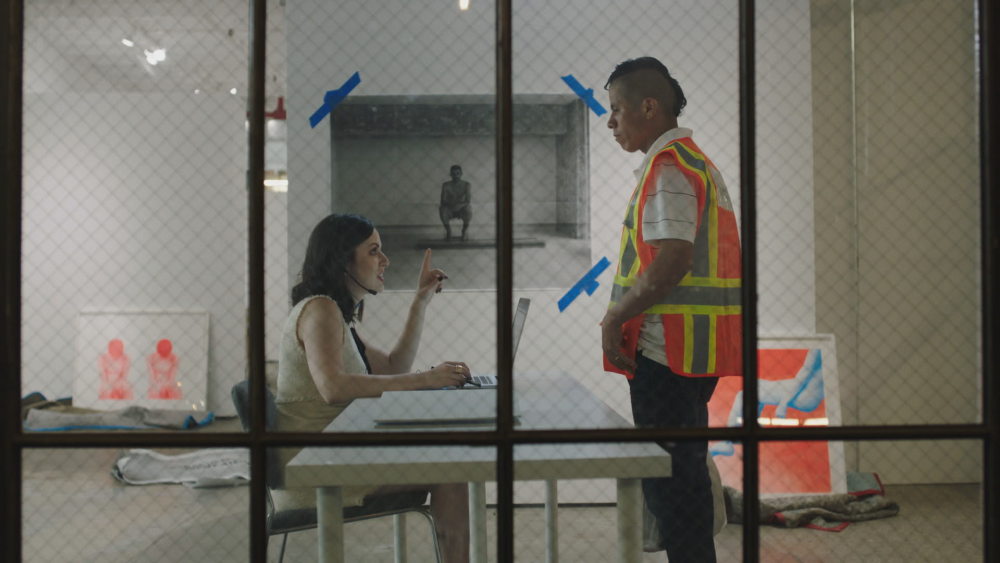 On the seventh day God rested, never worrying that a boss would tell him that he has to work on Sunday. Not the case for an ordinary mortal like José, an immigrant from Mexico working as a delivery man for a high-end restaurant in Brooklyn’s Sunset Park. José is not only the best worker that restaurateur Steve (Gabriel Núñez) has on his staff. He is also captain and best player of a soccer team named for the Mexican town of Puebla. Here’s the movie’s big conflict. The Puebla team has made the semi-finals in soccer. The group will play the finals on a Sunday and without José they are sure to lose. When La Frontera restaurant schedules a birthday party on Sunday funded by a high roller, Steve needs his entire staff present. Days off are canceled. If José chooses to play in the finals, he will be fired. If he chooses work at the restaurant on what should have been his day off, his team will lose. How would you choose?

“En el Séptimo Día is under the direction of Jim McKay using his own script, a filmmaker best known for directing some TV episodes like “The Good Fight,” “Law and Order,” and “Bosch” but whose last full-length feature “Everyday People” about the closing of restaurant resulting in a loss of jobs, shows that he has the common touch. Here McKay has picked up a group of young, energetic, non-professional actors, Mexicans who live together at a place in the Sunset Park neighborhood of Brooklyn. They horse around, they give advice, they tease one another and are an all-around bunch of good guys. José gets conflicting counsel from the people in his circle. The more reasonable ones, knowing that he expects to bring his pregnant wife Elizabeth (Loren Garcia—seen only on Skype) up to Brooklyn to be with him, requiring him to make enough money and get good references to support her and the child she is carrying. To most of us in the movie audience, the choice is clear, particularly since he knows he can get another job in a similar capacity though he insists that he wants to work only at La Frontera.

Yet José refuses to let his team down. How he manages to solve the problem and with the help of Elmer (Gilberto Jimenez) a young man who watches the game behind the fence and roots for the Pueblas, becomes the film’s most engaging and humorous action. Cinematographer Charles Libin knows how to give the working-class neighborhood in Brooklyn a look at a place that the great borough must have appeared decades ago before gentrification, not the kind of location that would prompt many of us in audience to visit where the big attraction is the Brooklyn Heights Promenade with its spectacular nighttime view of the city skyline.

Throughout the movie José is riding his bike, pumping away vigorously even in the pouring rain when the wind blows his plastic raincoat into a balloon-like shape. He takes dangerous actions without wearing protective headgear (I say from experience that delivery people in Brooklyn simply don’t go for the prissy protection on their heads). That one of his teammates is sidelined with a knee injury received on the field does not worry him. When needed inside, he busses tables and washes dishes, trying now and then without success to convince manager Steve to give him the day off. Some of these young people may be undocumented but in New York City we fight to keep I.C.E. out of our territory. In the lead role Fernando Cardona does such a terrific job at projecting the life of a bilingual working class stiff that he can look forward to a bright future in the business. A solid entry by McKay after a fourteen-year break.