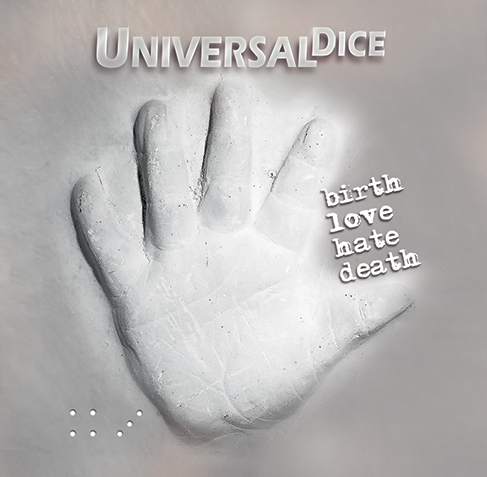 Encouraging listeners to re-think what they once took for granted in life, particularly in their personal relationships, is a powerful revelation in rock music. UniversalDice is one such unique band that creates stunningly relatable, melodic and beautifully played and arranged modern and classic rock songs that highlight both the benefits and adversities of family and romantic connections. The group’s latest 16-track album from Infidels Records, which is titled ‘birth, love, hate, death,’ features an ambitious and rich lyrical content that challenges the genre’s norm, as the lyrics makes their fans ponder their meaning within their community.

The songs on ‘birth, love, hate, death’ were all written and produced by UniversalDice’s lead singer, Gerry Dantone, who always naturally crafts relevant and intensely emotionally themes and messages. The record is the second rock opera that was created by the musician, who recalled melodies and qualities that he admires in such bands as the Who, the Beatles, Green Day and the Killers. Dantone has perfected a writing style that’s humanistic, provocative and multi-layered, which is a major highlight on his band’s newest album. The record’s tunes are intriguingly told through the perspectives of a woman named Danielle, as well as several people in her life, including her mother and the man she’s romantically involved with.

The first entry on ‘birth, love, hate, death’ is its captivating introduction, ‘Welcome to the World.’ Set against a classic rock electric guitar, Dantone’s stellar rock vocals and lyrics encourage people to truly examine their life situation, as he hopes everyone can learn to prosper. The song also inspirationally encourages people to embrace the identities they wish to have every day.

‘Welcome to the World’ then transitions into the album’s sophomore effort, ‘I Wish I Could Tell You This,’ which is told through the perspective of Danielle’s mom. Driven by stunning country-blues guitar riffs, the track highlights how the mother bad a challenging home life as a child, which led to her getting pregnant under difficult situations. She admits that since she loves her child so much, she wants to protect her from experiencing the same emotional pain that she has endured. The pain caused by the situation radiates throughout Dantone’s emotional lyrics and vocals.

Another noteworthy tune on on ‘birth, love, hate, death’ is the fourth entry, ‘The Prophet,’ which is told through Danielle’s perspective. As one of the few true hard-rock songs on the record, Dantone’s stunning lyrics are driven by powerful guitar riffs and drum beats. The raw emotions of the production chronicles how Danielle longed for the moment that she could escape her life, especially since her father was forcing her to marry a man that he chose for her. After running away from the situation, she finally feels free, and like she control over her own life.

UniversalDice has also crafted an enthralling track with the album’s sixth tune, ‘Take Me Home,’ which is told through the perspectives of Danielle and the man she’s involved with. The powerful ballad notes how they both so desperately want companionship and safety in life that they’re willing to give up desire to be protected by someone they trust.

The penultimate entry on ‘birth, love, hate, death,’ which is titled ‘One Day at a Time’ and is told from Danielle’s point-of-view, is a poignant ode to the idea that people never want to lose their positive connections. The woman’s painful experiences in life are beginning to subside, as she has finally found solace in wanting to make the person in her life proud of her. Backed by emotional guitar riffs, Dantone sentimentally croons about how Danielle has finally found positive support in life.

Danielle’s stunning transformation concludes in the slow-tempo final song on UniversalDice’s epic rock opera, which is titled ‘Forever.’ Dantone penned captivating lyrics that highlight how the woman has finally proclaimed that she will always have love in her heart, even during the bad days.

Supporting listeners as they re-think what they once took for granted in life, particularly in their personal relationships, is a enthrallingly unique endeavor in rock music. UniversalDice is one such rare band that creates stunningly relatable, melodic and beautifully played and arranged modern and classic rock songs that highlight both the benefits and adversities of family and romantic connections. The group’s latest album, ‘birth, love, hate, death,’ features enriching messages that challenges the genre’s norm, as the lyrics makes their fans ponder their purpose within their community.

For more information on UniversalDice, visit the band’s Facebook and Twitter pages. Listen to birth, love, hate, death’ on Spotify.