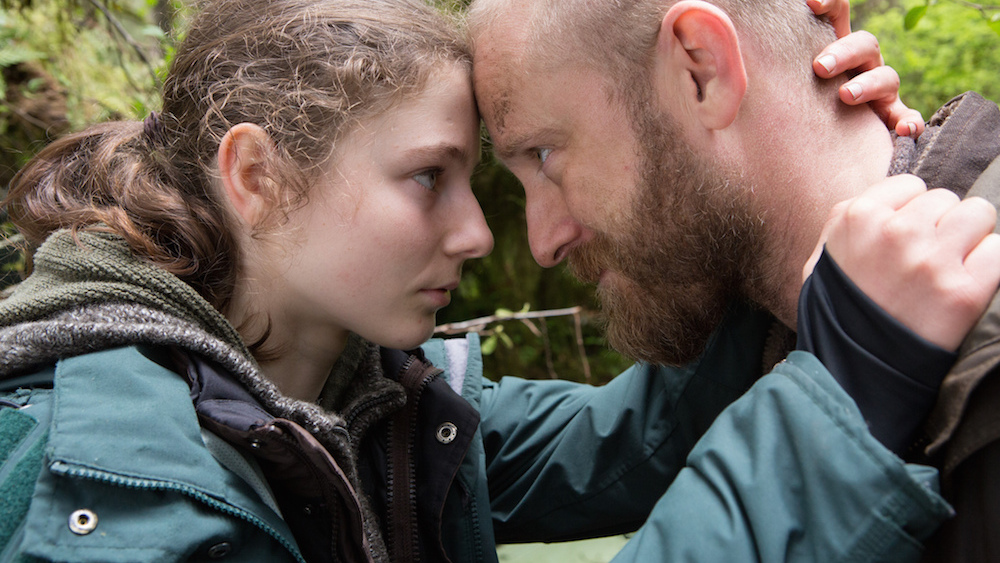 A well-researched facet of child psychology states that little girls from about the age of three adore their fathers. Picture them riding piggy-back while their dads take walks around the house or go shopping on city streets. Dads are the role models for the tots until the age that gets them thinking of the virtues of more independence and a look toward celebrity role models. By the time the girls are fourteen or fifteen, they are either rebellious or have enough character to move subtly away from their childhood mentors. In “Leave No Trace” we don’t have much backstory on Tom (Thomasin Harcourt McKenzie) but we do see her as an adolescent whose love for her father, Will (Ben Foster) is so strong that she willingly accompanies him day and night in and around the forests of Oregon. Her compassion for him is influenced by her understanding that he is emotionally ill, a veteran with Post Traumatic Syndrome Disorder who needs to be where he can find peace away from society and cannot abide living either in Portland or even under the roof of a small private dwelling that he is offered by social workers.

In fact we don’t see her resistance to living like Henry David Thoreau until near the conclusion of the story in this tale adapted from Peter Rock’s novel “My Abandonment,” which deals with the thoughts of a man named simply Father together with his conversations with his daughter Caroline.

Of significance is that Will does not consider himself homeless. Forest Park in Oregon is his home and he has no wish to leave, that is, until the police cops him and his child from federal land when the police dog sniffs out the hiding place. Later the tent community is bulldozed by the authorities.

We watch Will try to light a fire from damp wood, and teach his daughter so well that she could probably outdo most young people in ordinary schools. They boil eggs, drink rain water, and find themselves so attached to the mountainous park that they barely appreciate a private room given to them by the good people of Oregon, principally Dale (Dale Dickey) and social worker Jean Bauer (Dale Millican). Ironically, to earn his keep, Will must participate in the preparing of Christmas trees which, given his love for nature and the absurdity of killing trees to put in people’s homes would lead him to turn his back on the good will of the employer. The rural people we see on the screen do not look like the stereotypical folks that would vote for Trump, but then again Oregon takes pride in being a blue state that has no problem legalizing marijuana.

The two principals work wonderfully with each other, the dad taking care of a cut on his daughter’s hand while Tom more than reciprocates by helping her father when he has passed out.

You can see how Will is a fish out of water, or in his case a rural person in a social worker’s sophisticated world when he is frustrated with answering true-false to a 450-word psychological test, one which looks to me like an MMPI or Minnisota Multi Personality inventory which now contains 557 items. Gradually, but ultimately, the well-brought-up, decently home-educated teen must consider whether to make her Thoreauvian existence a permanent one while the father must decide how long he is to continue shunning society and allowing his girl to miss out on the social activities of a regular school.

Debra Granik is well-known to lovers of indie movies for her “Winter’s Bone,” featuring a breakthrough performance by Jennifer Lawrence as an Ozark Mountains woman searching for her drug-dealing father. One might guess that “Leave No Trace” will serve to catapult the career of New Zealand-born Thomasin Harcout McKenzie, heretofore known only for her role in TV movies, shorts, and one big-studio drama, “The Hobbit: The Battle of Five Armies.”

“Leave No Trace” is one of those rare PG-rated movies made for adults.