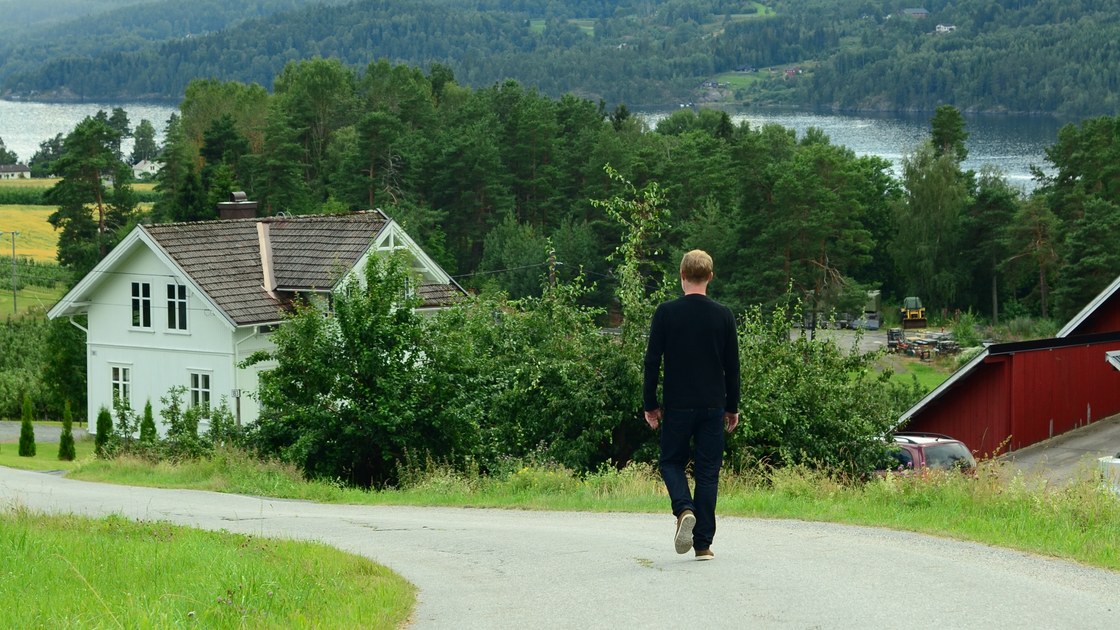 “Gavagai” is an invented word in an imagined language that is subject to different interpretations. The term comes from the book “Word and Object” from W.V.O. Quine—a major philosopher whose Wikipedia article challenges us to understand his point of view.
“Gavagai” the film is from an American director, Rob Tregenza, using an Austrian actor, Andreas Lust as the principal character, a Finnish girl in the role of a woman being courted, and a Norwegian, Mikkel Gaup, who serves as a safari guide to Norway’s elk country. Written by the director with co-writer Kirk Kjeldsen, the film adds class in the form of frequent quotes from the poetry of Tarjei Vesaas (1897-1970). The spare dialogue is mostly English though the tour guide speaks to his countrymen in Norwegian.

This is a most unusual film, one that is boldly original and exceptionally lyrical, rejected by several film festivals including those in Berlin, Cannes, Venice, Toronto and London perhaps because it is too highbrow even for the judges. Yet it is in no way a complex puzzle of the sort that makes people wonder, such as “Last Year at Marienbad” and “Veronique,” but is for the patient viewer who revels in the type of cinema that penetrates life as shown by the contrasting personalities of a grief-stricken foreign tourist and his earthbound guide.

This is a road-and-buddy movie, the buddy part coming alive during the concluding moments when the two travelers for the first time laugh out loud at a mishap in the Mercedes. The German businessman who is not named (Andreas Lust) carries an urn with the ashes of his recently departed wife, a woman who appears as an apparition as though stalking her ex-lover. He is on the way to Vinje, Norway, the home of the poet Tarjei Vesaas with the elite project: to translate the poet’s works into Chinese. But he does not know how to drive. In a village in the Telemark region of Norway, he hires a guide who advertises elk safari tours, offering 3000 kronas ($367) each way if he would take the grieving fellow to a remote destination unreachable by other means. For most of the trip the traveler keeps to himself, even refusing the invitation to share the front seat with the guide. In one scene, the guide takes a break to try to reconcile himself with an angry girlfriend (Anni-Kristiina Juuso), bringing her flowers but achieving nothing.

Doubling as cinematographer, Rob Tregenza unfolds the beauty of Norwegian heartland, hilly and green, indicating how few people live in the small towns that each house is remote from its nearest neighbor’s. Mari (Anni-Kristiina Juuso), who is being courted, hangs her wash outside barely paying attention to the entreaties of her lover, with whom she has obviously had an argument.

Tregenza’s most notable previous feature, “Talking to Strangers,” found the American developing nine incidents in the same non-jazzy style of his current offering, which will appeal to an audience that does not require either bursts of melodrama or whodunit mystery. The rewards are there for such people, though you would not expect this to open in many areas outside New York (August 3, 2018) and Los Angeles (August 10, 2018).

Tarjei Vesaas would be thrilled by the film. His poems deal with the big issues: death, guilt, angst, intractable grief, all artfully E embedded here. Among his quotes, one that would apply beautifully to this film is: “Anyone who absolutely has to understand everything he sees misses a lot.”