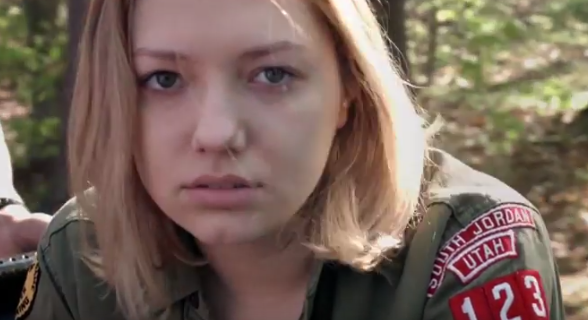 Finding the remainder of humanity when evil parasites who practice mind control overtake Earth is a devastating experience for anyone, no matter how much knowledge they have of the science world. That’s certainly the case for actress Brielle Edborg’s character in the new sci-fi movie, ‘Black Wake,’ which is set to be released on DVD and VOD on August 7, courtesy of Vision Films. In honor of the drama’s home distribution, Shockya is premiering an exclusive clip from the thriller, which is titled ‘In the Woods.’

Inspired by the horror fiction of H.P Love Craft, ‘Black Wake’ follows specialists who gather in a top secret facility to investigate a series of deaths on the beaches along the Atlantic Ocean. When the determined Detective Michaels (Sizemore) sends one of the scientists, Dr. Luiza Moreira (Guevea), the crazed writings of a mysterious homeless man, she discovers the actual threat may be an ancient force from the sea hell-bent on bringing madness and death to all of humanity. Can she convince her colleagues, who are led by Dr. Frank (Roberts), of the true danger before an ancient force rises from the sea to bring madness and death to all of humanity?

In preparation for ‘Black Wake’s home release, the sci-fi thriller can be pre-ordered on Amazon, as well as on the websites for BestBuy and Target. For more information on the horror drama, visit its Facebook page.

Shockya is premiering an exclusive clip from director Jeremiah Kipp's sci-fi-horror-thriller, 'Black Wake,' which is titled 'In the Woods,' and features actress Brielle Edborg.