Nostalgically embracing the creative innovations of the past while also contemplatively anticipating the progressive changes of the future is often a powerful key element in crafting enthralling music and inventive performances. The captivating members of the Austin, Texas-based funk-soul-R&B 10-piece band, The Nightowls, naturally embody that captivating ability to honor the iconic musicians who have influenced them, while also highlighting cutting-edge and contemporary elements, in their cutting-edge music.

The band’s primary vocalist and songwriter and guitar player, Ryan Harkrider, has grippingly been able to celebrate his influences in such genres as funk, soul and R&B, while also proving his natural ability to infuse his personal exploration into the struggles of contemporary society. The singer’s insightful investigation into how adults balance their achievements and conflicts, in both the past and present, is empoweringly supported by the stunning work of the band’s instrumentalists.

The Nightowls, which was formed in 2011 by Harkrider, released their third full-length album, ‘We Are The Nightowls,’ on April 27 on Nine Mile Records. The band, which is currently playing concerts across the U.S. for the rest of the summer, initially garnered attention for their latest record when they played at two shows at this year’s SXSW in their home city.

Harkrider generously took the time to sit down for an exclusive interview during SXSW at the popular Austin restaurant, Guero’s Taco Bar, where a musical and art showcase was also being held that provided a serene and creative background environment. Among other things, the singer-songwriter discussed how he enjoys performing at the Texas-based festival, as the community is very supportive of The Nightowls’ musical talents. He also shared that the 11 tracks that are featured on ‘We Are The Nightowls’ are all unique, but are all also rooted in his and his bandmates’ lives.

The conversation with Harkrider began with him explaining what inspired him to become a musician. “I come from a family of musicians. My grandfather was a big band director and trombone player at (the University of) North Texas, and my parents were choir directors,” the singer revealed. “So it was never really a question of what I was going to do.”

Harkrider added that he was “a choir and theater kid in high school. I then went to UT (the University of Texas) and studied music at the music school there. Playing music is all I’ve ever done.”

The Austin local then admitted that after growing up in Texas’ capital city, he never thought about leaving the state. “I have opportunities here to do everything I want to do. The music scene here is amazing. The community here is very supportive of us as musicians,” Harkrider humbly noted while also discussing the experience of being able to play for audiences during the music portion of SXSW.

“You then add in all of the national and international musicians who are coming to Austin now because of SXSW, and are playing at these great venues here. So we don’t have to go anywhere to experience great music and see great shows,” The Nightowls leader also pointed out. “We still do travel, but Austin’s a great town to play in.”

Harkrider followed up on his participation in SXSW by also explaining how he and his fellow bandmates in The Nightowls fit their performances to each venue and location they play in. “We try to cater our shows to the audiences of where we’re playing. We do a lot of different things…but being from Austin, the goal for us has always been to make something that’s completely authentic and true to who we are as a group here,” the singer noted.

“Sometimes that means making some musical choices that fit each location. There’s a lot of country music here in Austin, for instance, so when we play here, we’ll put the slide guitar on one of our songs,” Harkrider shared. “We try to put some of ourselves and our community and city into our music when we tour…but we try to make unique concert moments every time we play.

“There are things that we learn when we travel and play across the country. We discover that the audience in one particular city can enjoy certain songs, while crowds in other places prefer different songs. We like to keep things open, flowing and moving forward. So it’s about having a conversation with the audience every time we play,” the musician noted.

The Nightowls’ leader also admitted that the band’s sound “has transitioned over the past two years. We used to be more of a retro-vintage-soul band. But the personnel line-up of the band changed about a year ago, so I felt like I wanted to do something something that was authentic to ourselves” during that evolution process.

“We’re still, obviously, a big 10-piece soul band. Everything we do is rooted in dance and having a good time. But now we also have elements of R&B, funk, disco and that Austin country sound, which is how I like to call it,” Harkrider enthusiastically shared. “But we’re still a soul band that’s all about having a good time. We’re a horn and dance band!”

The songwriter also shared which musicians inspired him and is bandmates while they were recording ‘We Are The Nightowls.’ “Prince is still one of our biggest influences. Last August, we got to play at Paisley Park,” which is the late musician’s production studio in Minnesota. “So we try to keep taking moments from that experience and put them into our music. Stevie Wonder also always influences us,” Harkrider divulged.

“But, like I previously mentioned, we wanted to move things forward for this album. So we also listened to such artists as D’Angelo, Childish Gambino and Justin Timberlake. So we listened to a little bit of everything while we were making this record,” the singer revealed.

The singer then delved into what the writing process was like for him and his bandmates for the tracks on ‘We Are The Nightowls.’ He once again noted that he “wanted to make something that was authentic to us and our experience. I tried to write songs that are about things we have experienced together as a band. So there’s stuff about love and heartache, which I relate to, personally. The album’s also about being on the road, and having a good time, together.”

Harkrider also admitted that “Writing for this album was a unique process, because there was no process, and that was intentional. I didn’t want anything to feel as though it went through a machine. The writing process was unique to each song.”

Since The Nightowls didn’t utilize any one particular approach to penning the tracks for their latest record, they just embarked on a pursuit to find the best overall themes. “I write all the songs and then take them to the band. We then arrange the songs, which includes adding the horns and the girls’ vocals. We root everything in our live performances. So along every stage of the way, we perform the songs live, and make adjustments until we figure out what truly works. There’s a lot of trail and error…but we’re all about making the process as efficient as possible, which includes communicating as clearly as possible.”

The songwriter added that “Every song is very different from the others. The overall album is cohesive, in the way that we ordered the songs. We’ve only played certain songs in the studios, which is where we recorded them. There are also other songs that we always perform live, and we just pressed record during one of the shows. So there’s a lot of live authenticity on this particular album, and we’re really proud about that.”

Now that ‘We Are The Nightowls’ has been released, the group has been touring all summer, in an effort to support awareness about the album. They currently have shows lined up throughout Texas and the entire U.S. until early September. “As far as creating new music is concerned after this tour is over, we have a few producers in mind who we want to work with on our next record. But we want to get away from having a deadline of when we have to release new material, and just work on new songs whenever we have a good idea and want to record with a good producer,” the singer-songwriter divulged.

“I think the landscape of when you have to release new music has recently changed. We’re going to try to release new singles here and there throughout the rest of the year, and just capitalize on all of the creative momentum we have right now,” Harkrider shared. “Once you get into the studio, you don’t want to leave. We have this great mojo right now, and I’m not ready to give it up just yet!” 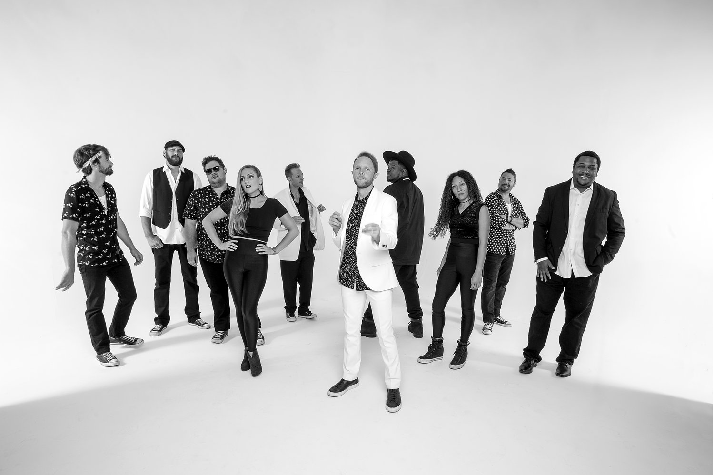