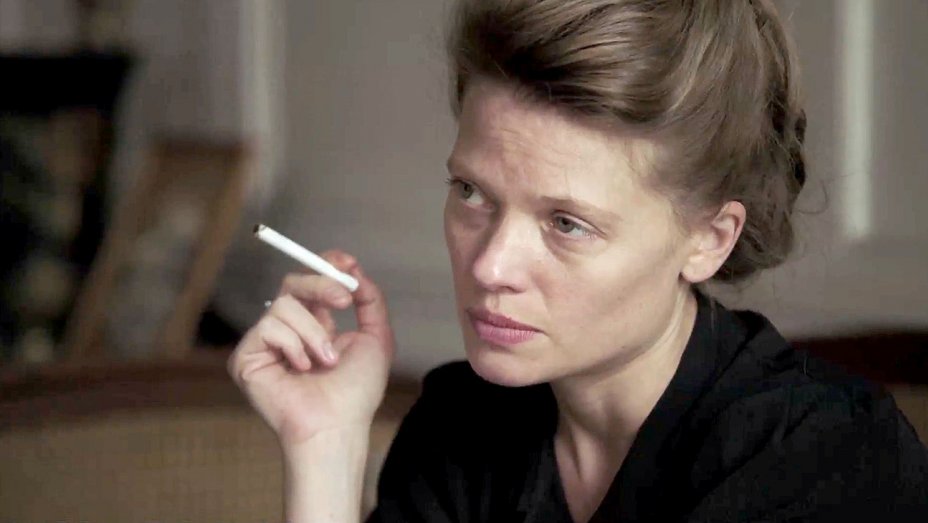 Nobody likes to wait. We wait on supermarket lines. Even worse: Motor Vehicles Department lines. We put license plates on our cars, drive out, and honk with road rage. Didi and Gogo wait for Godot. Americans wait for 18 months for Trump to tell the truth. Yet all this waiting is nothing compared to the suffering and numbness of Marguerite Duras épouse Antelme (Mélanie Thierry). During World War II in France, Marguerite’s husband Robert Antelme (Emmanuel Bourdieu), presumably arrested by the German Gestapo in occupied Paris for activities during the Resistance, may or may not be alive. Marguerite is conflicted by uncertainty, the kind of feeling that can drive many of us into fits of anxiety and depression. She will do almost anything to keep him alive, including cozying up to the vile Pierre Rabier (Benoît Magimel), a collaborator with the Nazis, who claims to know the whereabouts of Robert and also the authority to give the word to the Germans to keep Robert safe and free from torture. There is a problem here: does Rabier really have authority to do what he claims? No matter. Marguerite will take any chance to make sure that her husband is safe and will return to her in one piece after the liberation.

Emmanuel Finkiel, whose 2015 movie “A Decent Man,” focuses on a mugging and a man who is wrongfully charged—compared with “Memoir of War” is just a triviality. In his current film, a slow-burning, elegant yet mournful study of a woman who, when not writing yet another novel and serving in the French Resistance, thinks of nothing but her husband, even has one hallucination of his safe return in good health.

When she is not hobnobbing with Pierre Rabier, she is in regular communication with Dionys Mascolo (Benjamin Biolay), whose group of Resistance fighters have differing opinions of Marguerite’s contacts with the collaborator. Some think she is endangering the group and that Rabier is using her. Others have the reverse notion, that she can use him for information. While Finkiel does not go into detail, Marguerite is having an affair with Dionys Mascolo, which might make movie audiences wonder whether she really wants to see her husband Robert again, and whether, if told that he is half-dead with little chance to survive, she will have at least mixed feelings.

The film is autobiographical. The author wrote the book in 1944 expressing her feelings about life in Paris in 1944-45 under the occupation, though it was not published until 1985. (The 192-page English version is available at Amazon.) A great deal of movie dialogue comes across as entries in the memoir. But if you read the book, be prepared to think less of the author, who complains of her husband’s foul-spelling poop, death-in-life appearance, and her wish that he would just go away so that she could be with her lover. She waited and waited and waited.

Mélanie Thierry is going to be up for a César award for Best Actress and deserves to be considered. She is in virtually every frame, her prominent features open to the film audience even through the haze of smoke in her ever-present cigarette. She meets with the collaborator in the restaurant. Both smoke. She speaks with her favorite in the Resistance. He smokes. Some readers of the novel will doubtless feel that her husband is the real hero, the man who saw real action in the Resistance while she sat writing novels. And smoking. But in the film, not much is made of either her affair or her wish that her husband would disappear, thereby making her the hero. She’s terrific, and what’s more, her performance is enhanced by the director’s choice to use virtually no music in the soundtrack—just the occasional dissonance of a string instrument. After all this is a meditative piece, not a thriller that would thrive on music and histrionics, and in fact there is but a single case of melodrama finding Marguerite raising her voice, as this is a meditation. It is one that should make you revel at her performance, as she is able to communicate her suffering and numbness which, we should note, is nothing like the suffering that her husband is going through and which we do not see in the film version. Liberation is never free from irony.

Alexis Kavyrchine filmed the movie principally in Paris with one scene in Wollonia, Belgium, showing the return of prisoners. The restaurant scenes are from the Brasserie La Renaissance at 112 rue Championnet and Restaurant Le Bonaparte, 42 rue Bonaparte.. Other locations are the Place de la Concorde, the Hôspital Saint-Louis at 1 avenue Claude Vellefaux, and Marguerite’s meetings with Rabier takes place at the Place Saint-Germain-des-Prés. Period details including use of autos from the ‘40s are striking. In French with English subtitles.