Geoffrey Rush and Armie Hammer are searching for creative perfection in the home release of their biopic, ‘Final Portrait.’ Their exploration for artistic genius is continuing with the film’s recent distribution on DVD and Digital, courtesy of Sony Pictures Home Entertainment.

In celebration of ‘Final Portrait’s home entertainment release, Shockya is offering three lucky winners a DVD of the movie. To enter, email us at ShockyaGiveaway@aol.com. Let us know that you’re entering to win the ‘Final Portrait’ DVD giveaway in the email’s subject line and message. You have until this Thursday, August 16 to enter, and you can enter the contest once daily. After August 16, we’ll pick the winners at random, and notify them through email. Good luck!

‘Final Portrait’ is based on a true story, and was written and directed by Stanley Tucci. The script was adapted from James Lord’s memoir, ‘A Giacometti Portrait.’ In addition to Rush and Hammer, the comedy-drama also stars Tony Shalhoub, Sylvie Testud and Clémence Poésy. The DVD includes interview clips with the cast and filmmakers, as well as behind-the-scenes footage from the set.

In 1964, while on a short trip to Paris, the American writer and art-lover James Lord (Hammer) is asked by his friend, the world-renowned artist Alberto Giacometti (Rush), to sit for a portrait. The process, Giacometti assures Lord, will take only a few days. Flattered and intrigued, Lord agrees.

So begins not only the story of a touching and offbeat friendship, but, seen through the eyes of Lord, a uniquely revealing insight into the beauty, frustration, profundity and, at times, downright chaos of the artistic process. ‘Final Portrait’ is a bewitching portrait of a genius, and of a friendship between two men who are utterly different, yet increasingly bonded through a single, ever-evolving act of creativity. It is a film which shines a light on the artistic process itself, by turns exhilarating, exasperating and bewildering, and questions whether the gift of a great artist is a blessing or a curse. 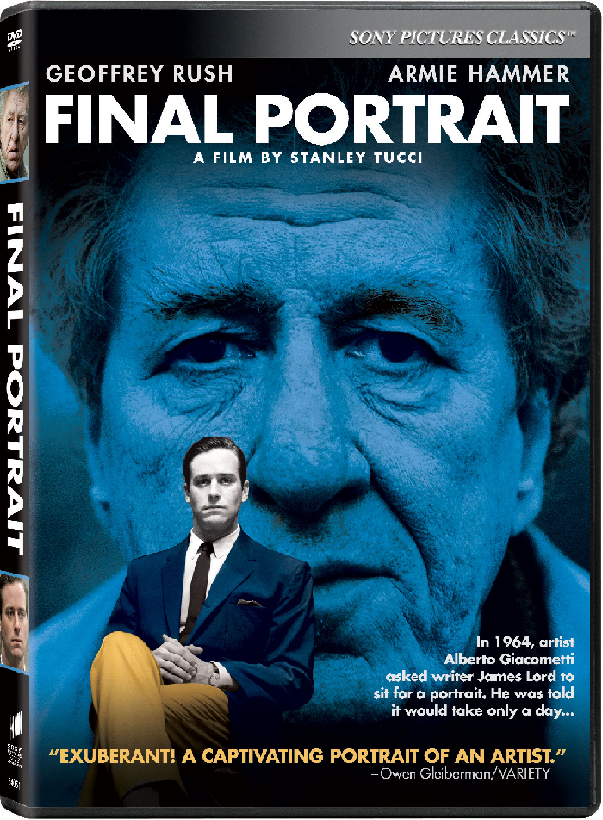