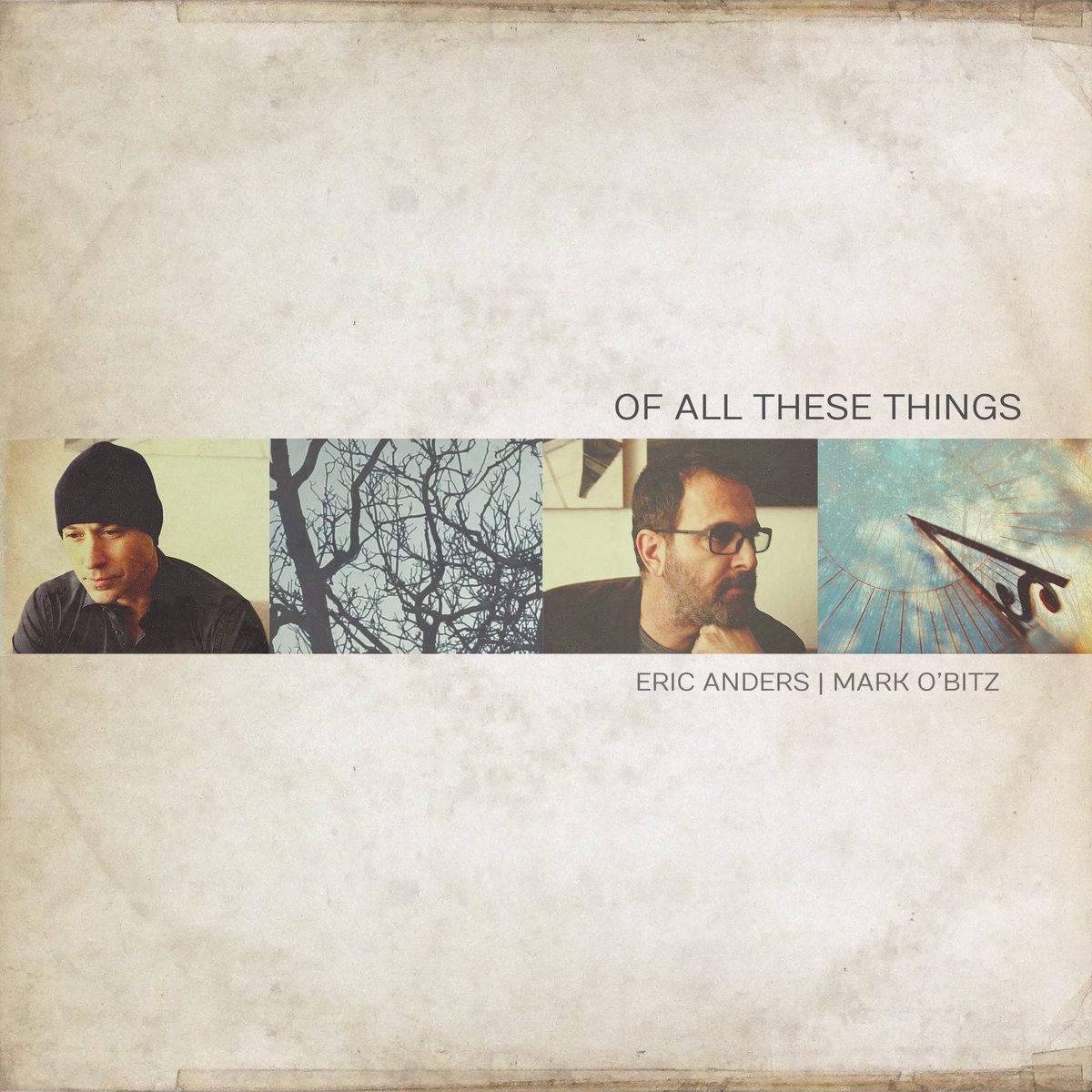 The cover for singer-songwriter Eric Anders and guitarist-composer Mark O’Bitz’s debut acoustic-Americana-folk-alternative pop album, ‘Of All These Things.’

Album: ‘Of All These Things’

Produced and mixed by: Jeff Peters at The Pie Studios, Pasadena, California; Assisted by Beau Floch

Crafting sentimental songs that equally challenge and gratify listeners isn’t always an easy and natural process for musicians. But singer-songwriter Eric Anders and his longtime collaborator, guitarist-composer Mark O’Bitz, powerfully created astonishingly emotional and relatable songs on their newly released debut alternative-pop album as a duo, ‘Of All These Things.’ The 10-track acoustic record features meaningful and soulful lyrics and instrumentation that proves the two musicians are sincere in their determination to find their place in the world.

‘Of All These Things’ begins with one of its best entries, ‘Below the Night.’ The emotional song nostalgically contemplates what a couple should do in order to survive. Driven by wistful slide and acoustic guitars, Anders powerfully infuses a feeling of melancholy into the equal pull of the happiness and tribulations of any genuine connection. Audiences will surely be left pondering what they should be doing for the people they truly care about while listening to the opening track.

The brilliant and dazzling ‘Below the Night’ is followed by ‘Of All These Things’ sophomore tune, ‘Hold On to Me,’ on which Anders passionately croons that the woman he loves just wants him to always share his truth with her. Backed by the eclectic mix of a passionate violin and the electric and acoustic guitars, the singer admits that the truth will set them free.

Another noteworthy entry on Anders and O’Bitz’s new album is the fourth song, ‘Eyes of Your Loves.’ Supported by an intriguing blend of country and light rock vocals and instrumental, especially the acoustic guitar and drums, the track is fueled by the singer’s nuanced and persuasive vocals. He croons about the importance of trying to find a safer place in world, and not being afraid to take the risk to obtain that secure environment.

The musical duo’s debut Americana-folk record also thrives with the tender eighth tune, ‘Together Must Be Found.’ With a
tenor in his voice that’s reminiscent of Neil Young’s vocal style, Anders naturally infuses a warmth and sensitivity into his declaration that he and the woman he loves can’t back down on their bond. He also passionately sings that he must work to overcome loneliness, which is set against an alluring mix of the synth and cello.

The penultimate entry on ‘Of All These Things,’ which is titled ‘Look Into The Sun,’ is one of its best. It’s backed by another wide-ranging blend of instrumentation that includes the acoustic and electric guitars, drums and violin, which creates a relaxed folk rock vibe. Anders relatably croons that he has been hasty to always want to leave connections, as he previously mainly longed for some time to be alone. But he ultimately realized that maintaining his connections with other people was just as important as individual freedom.

Anders and O’Bitz’s new album ends with one of its most memorable and relatable songs, ‘Found My Way Home,’ which will surely resonate with many listeners. The mix of Anders’ mesmerizing vocal arrangement and the enthralling instrumentation that’s driven by the acoustic guitar sentimentally notes that he has found his way home, particularly to the woman he finally has accepted to be the person he truly loves.

Generating affectionate songs that equally confront and satisfy listeners’ emotions isn’t always an easy and natural process for musicians. But Anders and O’Bitz powerfully construct astonishingly passionate and relatable songs on their newly released alternative-pop-Americana-folk debut album as a duo, ‘Of All These Things.’ The acoustic-rock record features meaningful lyrics and instrumentation that proves the two musicians maintain a genuine determination to find their rightful place in the world.

For more information on Anders and O’Bitz, visit their official website, as well as their Bandcamp, SoundCloud and Spotify pages.