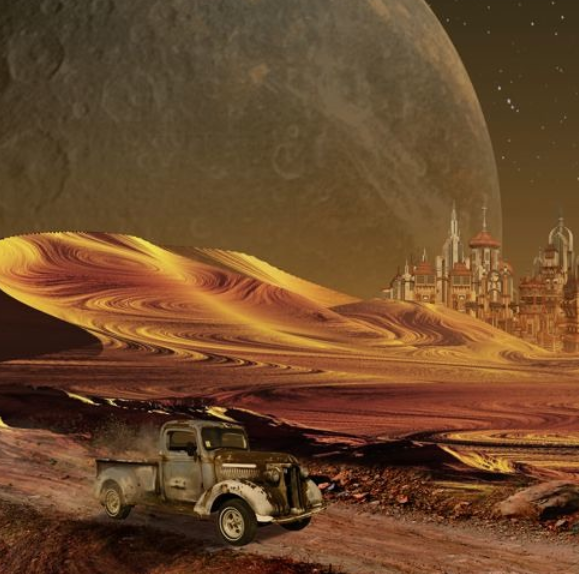 The cover for Alien Country’s country-rock album, ‘Like My Life Depends On It.’

Maintaining a whimsical confidence in how they approach both life and their songs is one of the most important ways for musicians to showcase their unique blend of sounds. Florida-based modern country rock band, Alien Country, who’s led by singer and founder, Liam Marcus Torres, expertly and assuredly know how to make improbable elements coexist in one frame of reference in their gripping songs. Their latest enthralling tunes, which are featured on their recently released album, ‘Like My Life Depends On It,’ effortlessly create powerful imagery on how their distinct experiences have given them the self-assurance to create distinct sounds that listeners can truly understand.

Alien Country’s 13-track record begins with one of its best entries, the Americana-country-folk-inspired ‘So Called Friends,’ which features Peyton Lane. Torres immediately proves his faith in his musicality through his authentic alternative rock and equally soulful vocals. Also backed by the melodious sounds of the mandolin and violin, as well as the evocative blues guitar, fiddle, bass and drums, the song features a great energy and rambunctious quality that fully exhibit the singer’s soulful vocals. The track powerfully notes the singer’s nervousness about how to approach life and love, particularly when he was younger.

The sophomore entry on ‘Like My Life Depends On It’ is another tune that features Lane, which is titled ‘Reality Check.’ The song features an enthralling rock-infused mix of the violin, bass, guitar and drums, as Torres’ signature vocal harmonies. The overlaying of his vocals create a dynamic soundscape that exudes a unforgettable mix of energetic indie garage rock and country vibes. The electric track relatably notes that people have to figure out their lives on their own.

Another notable tune on Alien Country’s new album is ‘I Can’t Say I Blame You,’ which features a catchy and melodious feel. The expressive notes from the violin help give the song an equally dramatic, retro and New Wave appeal. The song also creates an intricate blend of vocal harmonies and instrumentals, as the musician croons that he and the woman he loves can’t always save each other from what happened between them, but they try to stay friends.

‘Remedy,’ which features energetic rock-influenced electric guitars, marks a slight shift in tone on the record. Torres’ vocals and instrumentals on the track feature an interesting blend of alternative rock, new wave and country elements. The energetic rhythm that are featured on the fiddle and guitar propels the tune, as Torres sings that he’s ready to face life, and find a remedy to feel completely better.

The penultimate track on ‘Like My Life Depends On It’ is the exciting ‘No One Is Coming for You Tonight,’ which is driven by an intriguing violin, electric guitar, bass and drums. The uptempo, rock-infused country song features gritty vocals from the singer, which makes the tune edgy and unforgettable.

‘No One Is Coming for You Tonight’ then delves into ‘Like My Life Depends On It’s final entry, ‘Remedy Remix,’ which is driven by a more electrifying, classic rock sound than the original track. The speedier rhythm gives the remix a sultrier sound, especially with the exhilarating layers of vocals that are mixed with a complex blend of the violin, electric guitar, bass and drums.

Maintaining confidence in how they approach both life and their songs is one of the most important ways for musicians to showcase their unique blend of sounds. Alien Country, with Torres in particular, efficiently and assuredly know how to make improbable elements coexist in one frame of reference in their enthralling songs. Their latest enthralling tunes are featured on ‘Like My Life Depends On It,’ which naturally create powerful imagery on how the musicians’ distinct experiences have given them the self-assurance to create distinct sounds that listeners can truly understand.