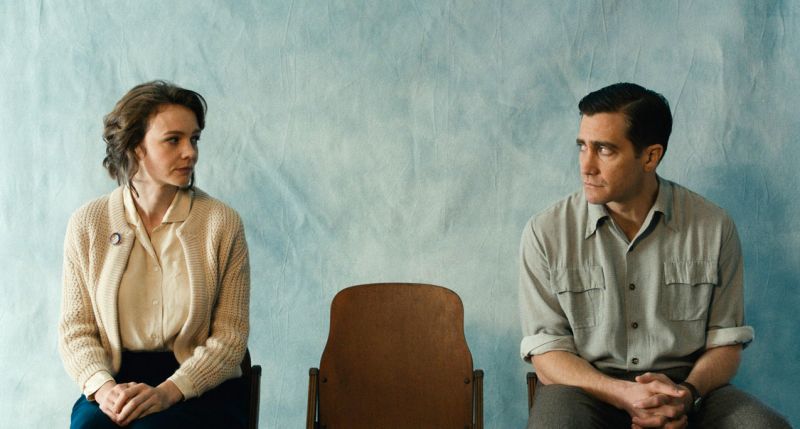 Great Falls was the largest city in Montana from 1950 to 1970, taking its name from series of five waterfalls along the upper Missouri River. The Great Falls portrayed in Wildlife is a dusty small town located in “no-where-land”, Montana, enough to encourage an urban person to get back on the bus at the depot and never come back.

The Brinson family, portrayed here just relocated to Great Falls, where the father Jerry (Jake Gyllenhaal) works at a golf course, tending to members in a friendly manner. Though the job pays low wages it is enough to put food on the table, and keep the mother Jeanette (Carey Mulligan) home, serving meals and helping her fourteen-year old son Joe (Ed Oxenbould) with homework assignments. When Joe is “let-go” from the golf course Jeanette is supportive at first, encouraging him to look for another job. This will not be the first time that the family had to relocate and they will prevail. Being unemployed Joe decides to go and fight fires in rural Montana while leaving his son and wife to fend for themselves. This move changes Jeanette’s behavior as she starts looking for a stronger male character to lean on and get financial help from. Upon his return from fire country Jerry has some good news. He may get a new job which will require another family relocation to the “Eastern Front”. Something snaps in Jeanette and she rebels, refusing to take the constant relocations any longer. These events lead to the family’s disintegration and a broken marriage.

While directing Wildlife Paul Dano succeeds in conveying the story of a family in emotional and monetary distress, shown through the eyes of a fourteen-year old boy. Though the time frame is the early 1960s the picture has a feel of vast open isolated country during the 1929 Great Depression.

Acting is first-rate in Wildlife. Ed Oxenbould presents a distraught fourteen-year-old Joe, faced with the destruction of the family he has known, asking “What is going to happen to us mom?” Feeling anxious and confused he carries the “Montana Stare”, like most of his class mates. Carey Mulligan gives us a resourceful Jeanette, just about to break free from the marital bondage that put her in restraints since the age of twenty. Jake Gyllenhaal portrays Jerry as a troubled family man, unable to hold on to any gainful employment, in a country going through an economic boom. Supporting role is provided by Bill Camp, playing Warren Miller, a late-middle-aged man who attracts the female sex because of his wealth, despite his unappealing physique.

Wildlife was filmed by Diego Garcia in Livingston and Paradise Valley, Montana, and later on in Enid, Oklahoma due to weather constraints. It comes highly recommended and will provide great viewership for the indie crowd.