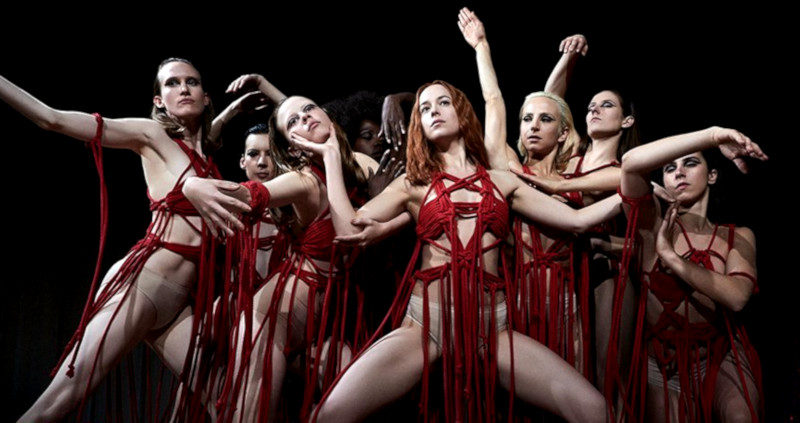 Suspiria is mystery-horror story of Susie Bannion, told in six parts and an epilogue, during an over-long one-hundred-and-fifty-two minutes. Susie (Dakota Johnson) is a young woman who grew up in the Mennonite community in Ohio and wants to study modern dance in Berlin, Germany. Though lacking experience she has plenty of motivation and is being offered a try-out at the Markos Dance Academy, with room and board. The company’s artistic director Madame Blanc (Tilda Swinton) and her first assistant Miss Tanner (Angela Winkler) are impressed with her ambition and offer a lead part in the up-coming Volk. Dancing in the company is strictly experimental and students are encouraged to improvise. Is Susie’s good fortune too good to be true? You bet it is.

Strange things are happening in Berlin during 1977 in general, and the company in particular: Lufthansa flight 181 had been hijacked; Police clashes with the Baader-Meinhof group; There is a high concrete wall dividing Berlin to East and West, where people have to present passports before passing from one part to the other through “The Palace of Tears”; Dancers leave the company never to return or require psychiatric help from Dr. Josef Klemperer (Tilda Swinton). The story of Suspiria hums along, with the culmination of Part Six, taking place on a public stage, with a large audience attending.

Acting in Suspiria is first rate, starting with Tilda Swinton in a double role of Madame Blanc and aging Dr. Josef Klemperer, a man with psychological problems of his own. Dakota Johnson in the role of Susie Bannion presents a young and insecure woman who grows up fast to take her ordained place in a den of witches. Good supporting roles are provided by Angela Winkler as Miss Tanner, Sylvie Testud in the small role of Miss Griffith and Mia Goth as Sara. Jessica Harper, who appeared as Suzy Bannion in the 1977 version, appears here as Anke, the lost wife of Dr. Klemperer.

Director of photography Sayombhu Mukdeeprom shows us the exterior of 1977 Berlin, where it either rains or snows all the time. Filming took place in East Berlin, and presents a bleak, sad city, ravaged by war with a dividing wall in the middle. Most interior scenes take part in semi-dark environment of browns, blacks and whites, all of which come to a grand crescendo during the presentation of Volk, done in bloody red. Interior filming locations were at the Grand Hotel Campo del Fiori in Varese, and Palazzo Estense, Italy, which stand-in for the Markos Dance Academy. The dance institute is shown as a strange place, filled with confusing mirrors, secret doors and curtains

General makeup by Fernanda Perez is exceptional, with wigs by Hannah Scott and prosthetics by Lorenzo Tamburini and Valentina Visintin.

Before going to view Suspiria please check your brain at the entrance door and do not look for logical explanation for plot parts. Just enjoy “The-horror! The-horror!”.