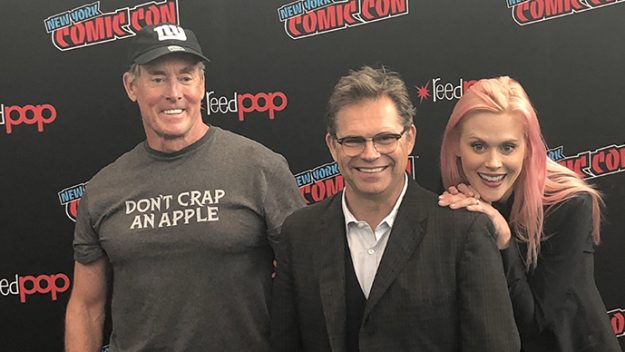 Defeating curses that not only impact them personally, but also their co-workers and neighbors that they have unwittingly come to care about, can be a daunting task for many people. The process can become even more alarming when they reluctantly have to go against every instinct they’ve ever had, and start to change their actions, so that everyone’s destinies aren’t irrevocably changed forever. That important lesson is a notable and harrowing lesson that the title character of the acclaimed IFC horror-comedy series, ‘Stan Against Evil,’ is realizing throughout its current third season.

Creator, executive producer and actor, Dana Gould, continues to make ‘Stan Against Evil’ relatable and humorous, despite its horror origins. The seemingly implausible circumstances that the title character and his fellow residents in his hometown of Willard’s Mill showcases how even the most improbable situations can ultimately emphasize realistic emotions. Actor John C. McGinley, who portrays the title character and also serves as a producer, gives a quirky and passionate portrayal of Stan. The character continues to showcase how an anti-hero, who has become the epitome of remaining stuck in the past and not wanting to care about anyone else, can ultimately impact the future of everyone in his life.

The beginning of ‘Stan Against Evil’s third season picked up immediately after the events of the Season 2 finale, with Stan and Evie (Janet Varney) back in Willard’s Mill. The duo is dealing with the consequences of Stan traveling through time to save his dead wife, Claire. In doing so, he inadvertently opened a portal between the Land of the Living and the Land of the Dead, which allows evil forces to truly take over the town, and even some of its inhabitants. Although always the skeptic at first, Stan must work with Evie to once more save the town, even if it means making a literal deal with the devil.

In honor of the final two episodes of ‘Stan Against Evil’s third season premiering tonight at 10 and 10:30pm on IFC, Shockya was generously given the opportunity last month to participate in interviews for the horror comedy’s current run during New York Comic Con 2018. Gould, McGinley and Varney all participated in individual press roundtable interviews, and discussed reuniting for an additional eight shows after the horror comedy’s first two seasons, which aired in the fall of 2016 and 2017, respectively. Shockya participated in the roundtables during the convention, after we were generously given the opportunity by the cable network to attend a set visit in Atlanta for the filming of the third season this past summer.

McGinley began his conversation by discussing the experience of expanding his title character’s emotional arc throughout ‘Stan Against Evil’s run. “Dana brought the scripts to me in Malibu. I read all eight (scripts), and said, ‘I think these eight episodes are really genius, but you’ve written a character who’s profoundly damaged and wounded. The wound is the loss of his wife and job, which both happened in the first three minutes of the (pilot) episode. Unless you’re willing to excavate those frailties, it would be difficult to play him…We have to explore that more.'” The actor added that the series’ creator “is so gifted in his craft as a television writer that he promised me that he would do it, and he did.”

The loss of Claire and his job “yields a profoundly dysfunctional guy” in Stan, McGinley then pointed. out “When he’s taking verbal shots at people, that’s born out of fear and loneliness. So when Season 2 ended, and Stan told Evie his truth, I was happy-I waited two seasons for that,” the actor further explained.

That emotional arc “resonates with people. We took that away from this Con last year, as well as the Con in San Diego. People were really attached to the end of Season 2, so we listened to that,” McGinley added. “The end of Season 3 is also going to blow your head off; it’s insane.”

Varney also expressed her appreciation for all the different variations of Evie that she get s to play on ‘Stan Against Evil.’ “Not to say that the show isn’t fresh without those variations, because I love the relationship between Stan and Evie…But Dana’s so impatient about the idea of being repetitive with all of the characters,” the actress revealed. “So there’s always something bonkers going on. It’s always fun when he says, ‘I have an idea for you to play this, or turn into that, for whatever reason.”

While the emotional journeys that the characters embark on throughout the the current third season of the horror show are serious, Gould feels that’s its also important to emphasize the comedic elements of the series. “Occasionally, you need to take some time for fake horror, and that’s what we provide,” the creator stated with a joyful tone. “There’s so much real horror that we like to give a half-hour respite…But the show really is a comic book that’s to be ingested for pleasure. The show allows me parody these horror movies that I love, while also using the talent that I have. So for me, it’s the perfect job,” Gould added.

In addition to the comedy, the fact that the chemistry between the actors and the crew has also grown throughout the series is something that Varney also appreciates. “We have so many of the same actors and crew work on the show for each season. We also have new people come in on each season, and they’re all fantastic. They come from other projects to have fun with us, and then go back to their other shows or movies before they’re even missed. Being back on set every year is really wonderful.”

Before Gould hires other scribes to work with him to create the comedy, character arcs and overall story lines for each season, he’ll write the first couple of episodes, and formulate the storyline for the entire season. “We hire four or five writers for each season, and get them together. For this season, we had Mike Mendez, Kandice Martellaro, Jessica Conrad, Ryan Murphy and Guy Busick. I’ll then say something like, ‘I really want to do a Japanese ghost story, so what can we do?’ We’ll then discuss it, and come up with an idea that works with our mythology.”

The creator added that he always likes to end each season with an interesting conclusion, in case the show isn’t renewed for another season. “But then it’s always a difficult corner to get myself out of (when the series is renewed for another season), which forces me to be creative. It’s especially true for this season, as it very much draws to a close a lot of the pre-existing mythology, but that opens up an entirely new world of problems. I like to burn the bridge behind me, so that I don’t go back and repeat myself.”

Gould also discussed his experience of portraying Kevin on screen, in addition to serving as one of the writers. “Kevin is based on a guy from my hometown growing up, who mowed lawns at the cemetery, as well as the character of Willie Loomis from ‘Dark Shadows.’ Willie wasn’t a monster, but he was on speaking terms with them.

“The fun thing about Kevin to me is that he’s this quiet character, but you’ll also learn strange things about his past. For instance, he worked on medical experiments in the army. So he’s had this really bizarre life,” the actor revealed. He added that “This year, Kevin and Denise start a little bit of a relationship, and it was interesting to take it there…Kevin’s becoming more human!”

The characters’ quirks were also created in part by Rob Cohen, who directed all of the episodes throughout the third season. The helmer “is one of Dana’s oldest and best friends. He’s also brilliantly funny and talented,” Varney revealed. “Like Dana, he’s a huge collaborator, and wants everyone to shine. So between Dana, Rob and the rest of the cast and crew, filming always feels joyful…Also, moving at such a fast pace is amazing. We feel like we’re going to knock everything out.”

Each season of ‘Stan Against Evil’ is filmed over the course of just over a month. Shooting on a short shooting schedule is a great experience for Varney because she, and the rest of the cast and crew, enjoy returning to Atlanta. Deborah Baker Jr., who play Stan’s daughter, Denise, “is an expert on the city. She has a little more time off than I do, because I work every day” while shooting the show. “So she’ll scout out the best ice cream shops and bakeries. Then on the weekends, she’ll have an agenda of things that she wants to show us around the city…She’s just like Denise! Deborah’s more connected to the real world than Denise is, though, and everyone loves her. But in every other way, she’s just like Denise! She plays with dolls and is like, ‘This is the best!'”

McGinley further noted that “The fact that we’re able to shoot these eight episodes in four-and-a-half weeks is preposterous!” But the actor also enjoys the short shooting schedule that the horror-comedy has overall. As a producer, he encourages “the other actors to rehearse the eight episodes like a Broadway play. We don’t have the budget to put aside days for proper rehearsal time down in Atlanta. So we have to know our character arcs.”

The actor-producer also revealed that the cast and crew will film scenes from different episodes on the same day, especially if they only have a location for a limited amount of time. “So we, as actors, have to grind, and sometimes it’s magical, and sometimes it’s not. But it’s never boring, and we all have to hang on by the skin of our teeth!”