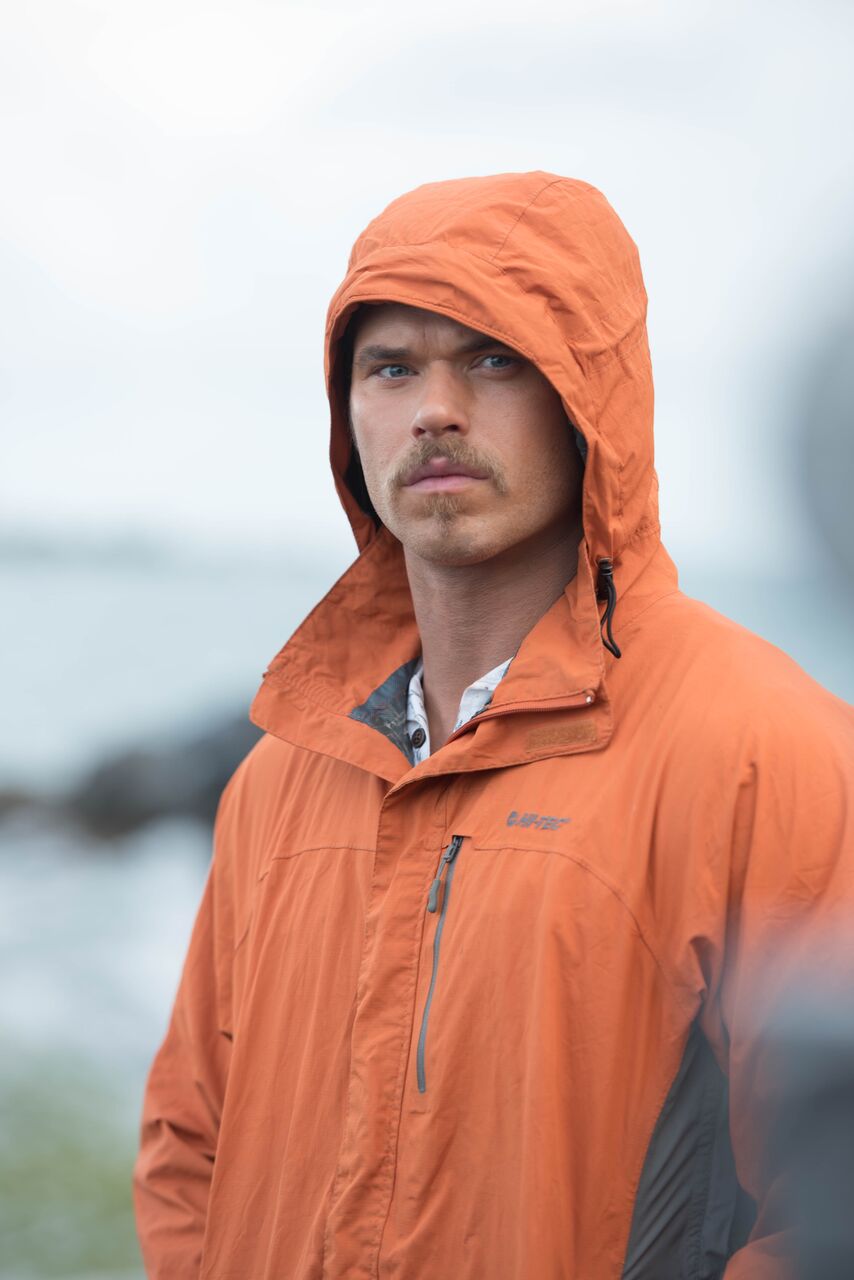 Connecting with, and understanding, the emotions and motivations of someone who leads a very different life can be a challenge for anyone. But actors can often passionately immerse themselves into the mindset of any distinct character, particularly one who’s based on a real person. That’s certainly the case for actor Kellan Lutz and his castmates of the new action biopic, ‘Speed Kills.’ The thriller fictionalizes the life of speedboat racer and entrepreneur, Don Aronow, who allegedly had connections to the mob.

‘Speed Kills’ is out now in theaters and on VOD, courtesy of Saban Films. The crime film, which was directed by Jodi Scurfield, and written by David Aaron Cohen and John Luessenhop, is based on the 2013 book of the same name by Arthur J. Harris.

‘Speed Kills’ follows the life of Ben Aronoff (John Travolta) over the last 25 years of his life. The businessman was a New Jersey construction contractor who moved his family, including his wife, Kathy Aronoff (Jennifer Esposito), and their two young children, to Miami in 1962 after facing some trouble up north. He eventually becomes even more successful as a builder, competitive racer and seller of high-end speedboats in the Floridian city. The boats were popular with fellow sportsmen, as well as celebrities, royalty, politicians and even drug smugglers, which leads to Ben facing even more conflict with the local Mafia.

One of the biggest rivals he’s forced to face is mob legend Meyer Lansky (James Remar), who was initially one of his allies and loaned him money. Ben also finds an enemy in Meyer’s nephew, Robbie Reemer (Lutz), who once admired the businessman but now views him as an opponent, as the aspiring mob boss begins to smuggle drugs through Ben’s ports. At the same time, Ben is also being relentlessly pursued by the local Miami police, particularly Agent Lopez (Amaury Nolasco), for his perceived crimes that are associated with Meyer’s business.

Ben also faces conflict in his personal life when Kathy decides to divorce him when their children are teenagers, after she discovers, and can no longer tolerate, his numerous affairs. He eventually happily remarries Emily Gowen (Katheryn Winnick), the former trophy girlfriend of the king of Jordan, and they have a son together. But Ben’s newfound happiness is short-lived, as he’s gunned down in 1987 in a presumed contract hit.

Lutz generously took the time recently to talk about starring in ‘Speed Kills during an exclusive phone interview. Among other things, the actor discussed how he was drawn to playing Reemer in the drama, because not only was he fascinated by the character’s relationship with Ben, but he was interested in collaborating with Travolta and Scurfield. The actor also revealed that he appreciated that the director allowed him and his castmates to improvise, and offer their own ideas about their characters, which helped infuse their scenes with rich nuances.

The conversation began with Lutz discussing why he was drawn to play Robbie in ‘Speed Kills.’ He noted that he “spoke with Jodi, our director, and he was sharing his vision for the movie. We had an initial general meeting, and that turned into another meeting, and I really dug the guy. I thought it would be a good experience working with him on his vision for the movie.”

The actor then admitted that after receiving the script for the biopic, he “dug deeper and researched the story of Ben Aronoff, because I had no idea who he was. But I became fascinated with him, and that leaked into my desire to work with John Travolta, who played Ben. It was a bucket list check-off for me to work with such a legend, as I hadn’t worked with him yet. He’s one of the kindest actors to work with, and he was always giving his all on set. He was brilliant and captivating to watch.

“There’s this one scene where John pushes me into the harbor, and when I popped back up, he was quick to ask, ‘Kellan, are you okay? Did I push you too hard?’ He was so sensitive. It was a unique experience to work with someone like him. He was so open and authentic,” Lutz shared.

The performer added that he did quite a bit of improvising on the set with Travolta. “He was just so present. He’s a fantastic actor to work with and learn from. All the scenes were rich with nuances, so it was a really great experience.”

Lutz added that it felt encouraging that he and his castmates were able to “do our thing and play. I didn’t work with a lot of the other actors, because many of my scenes were with John. But Katheryn Winnick and I hung out on set whenever our scenes were shot close together. Michael Weston was also awesome to work with again. We shot another movie together, ‘Love, Wedding, Marriage,’ about eight years ago. It’s great to work with actors who you’ve enjoyed working with before.”

After doing some research into Aronoff, the actor then did some investigating into Reemer’s life. “It’s so interesting to play a character who’s a historical figure. He was known in the ’70s. There’s some testimony about who he was and how he acted that I found online. I also looked up how he looked; there are some photos of him that I found. So it was great to create such a multi-layered character,” the performer shared.

“It was also fun to be in this film, because I hardly ever play the antagonist. I got to play this cocky mob boss’ nephew, who transitions into being a mob boss himself. I was excited to play those subtle changes as he stepped into these new shoes. So it was a really unique experience,” the actor further noted about starring in ‘Speed Kills.’

Lutz then further delved into the experience of playing a character who’s based on a real-life person, and the type of research he did into the life of Reemer, who was Lansky’s nephew. “I do enjoy both real-life and fictional characters. But they’re all so different. In terms of the real-life characters, it’s helpful to have information and the internet to do the research, so that you can create your own depiction of what they would sound like, and how they would act.”

In the thriller, Robbie is involved in the drug in Miami, and embarks on physically intimidating Ben, and anyone else, who stands in his way of success. So in addition to researching his character’s emotional arc, the performer also worked on creating the physicality for his role. “We had a great hair and make-up team. So whatever the vision was for my character, we were able to create that. Jodi was really supportive of us creating our characters the way we saw fit. So I really tried to emulate the way that Robbie looked from the few photos of him that I found online. With his mannerisms, I created them,” based on how he felt Reemer acted. “Then whenever I put the clothes on, I felt like Robbie.”

With ‘Speed Kills’ being based on the book of the same name by Harris, the performer added that he found it helpful to have that source material for his preparation for his role of Reemer. “Even paying homage to ‘Twilight,’ making movies that are based on books is so nice. Movie (scripts) can’t include everything that’s in the book, so having the book as source material is helpful in educating yourself. I highly advise any actor to do the same, and use the book as homework. They should read everything that’s out there, so that they can create the fullest image of their character,” Lutz explained.

“Having the book by Arthur was great. I think Jodi did a great job storyboarding and creating the script for the movie. That’s why I was so fascinated by the story of Ben Aronoff; there’s so much information in the script and book. He led such a unique life, especially when the mob people came in. He had a lot to juggle,” the actor pointed out.

The performer then described Scurfield as “an easy-going director to work with on the film. He already had his vision, and he trusted all of us actors. We had a great cast to work with on this movie. He hired actors he believed in, and he put his trust in us. That’s what a great director does…It was really easy working with him. If we had ideas, we’d go to him, and he’d be so quick to honor us with allowing us to try them, and they went really well.”

Another highlight of working on ‘Speed Kills’ was the fact that it was shot in San Juan, which doubled for Miami. Filming on location “is another reason why I love working on movies! You get to shoot in new locations. Puerto Rico is such a great place to work in, and the people there are great. I made so many great friends, and got to do so much, there,” Lutz shared. “Amaury (Nolasco), who plays Agent Lopez in the movie, is like royalty there. So going out with him was super fun.”

Lutz added with a note of empathy that “It was a bummer when the hurricane (Maria) hit, and destroyed a lot of the locations. So I was quick to connect with the people I formed relationships with while I was there, in order to make sure they were all good. Luckily, everyone’s great, and rebuilding, for the most part. So I’m excited to get back down there. I have another movie, called ‘The Last Story of David Allan,’ that I’m going to be shooting in the next couple of weeks, and it will be great to get back down there.”