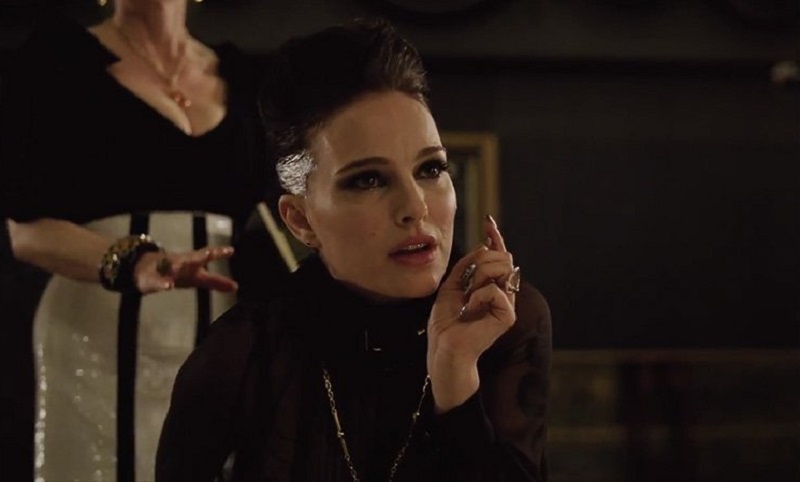 A novelistic narration by Willem Dafoe may give the viewer the impression that “Vox Lux” is a biopic about a singer whose name you might have forgotten. The movie may well be a statement about the complex lives of superstars and choreographed dancers. Brady Corbet’s sophomore picture still has us focused on one individual who comes back from drugs and scandal. The element of luck comes into play, in this case catapulting the career of a 14-year-old. Celeste’s song of grief after a terrorist attack on a high school leaving the teacher and some students in a music class dead and Celeste seriously injured will result in stardom for its young performer. A tragic, then, drives a teen from an innocent, religious girl whose life may have been spared because she urges the gunman to pray with her to a disturbed addict whose new demeanor will demand no cost for her.

This is the beginning of a career in the music business, replete with staffs of creative people overseeing the talent of the new singer: a star is born. This is up the writer-director’s ally, as his freshman film, “The Childhood of a Leader” takes the viewer into events that lead the title character to become a guide after World War I.

The opening visual shows a high-school kid’s murderous mission to the music room cutting down the teacher and some students, giving the impression that we may have tuned into a thriller rather than a study of a singer’s career. When Celeste (Raffey Cassidy), using the song-writing skills of her sister Eleanor (Stacy Martin), sings a mournful song at a memorial, word gets out to a nameless manager (Jude Law) who pushes the young woman to learn theatrical dance, rounding out the career that would spiral upward, get sent to earth, and gaining a comeback. She picks up the support of Josie (Jennifer Ehle) as her publicist. Eighteen years pass and now Celeste (Natalie Portman), hampered by a drug addiction, knocks out a new album, enjoying a close relationship with her teen daughter, Albertine (Raffey Cassidy in the double role.)

On the day of Celeste’s show which promises an audience of thousands, a terrorist attack occurs in Croatia, the shooters wearing masks from one of her videos. This is where the film shines, spotlighting Natalie Portman’s ham-fisted performance while sharing a coffee shop table with her daughter and, with wild gestures and an ethnic accent, she unfolds her veritable life story to the young woman before being chased out by the restaurant’s manager. In an extended finale Celeste, in a song and dance marathon, wows the crowd, her philosophy being that people should feel good and not worry too much about thinking.

The title comes from the name of her comeback album, “Vox Lux,” while thematically, the thirty-year-old writer director places his aim the nexus of violence and tragedy: the first horror has led to Celeste’s celebrity status, affording a cynical glory to a violent act and the paradox that out of mayhem, celebrity is born.