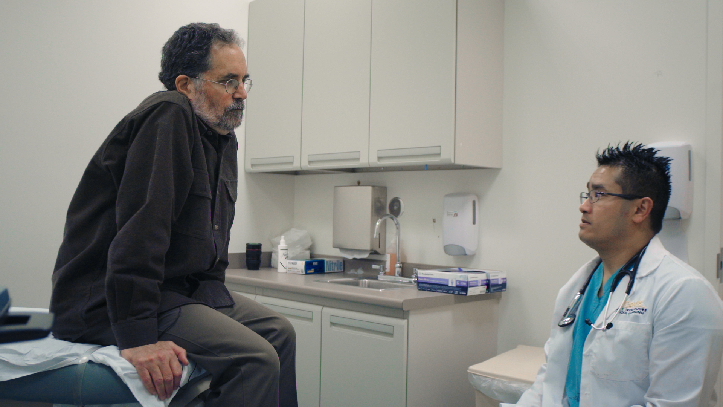 A still from writter-director-editor-producer Mike Eisenberg’s medical documentary, ‘To Err Is Human.’

With the numerous conflicts plaguing modern American society, one of the most vital ones is the silent epidemic of deaths being caused by avoidable medical mistakes. Therefore, embarking on a sustainable fight against preventable medical harm is the only way to help battle the harmful issue. That important journey is being highlighted in the new medical documentary, ‘To Err Is Human,’ which is being released tomorrow on VOD by Gravitas Ventures.

In honor of the film’s distribution, ShockYa is premiering an exclusive clip from the project, which is titled ‘Practice.’ The clip follows Jason Sajulan, a physician assistant graduate student at the Betty Irene Moore School of Nursing, UC Davis, as he works with a standardized patient, who’s an actor that helps doctors on improving their delivery of care. Sajulan is working on revealing the news that the patient’s team missed giving him vital information about colon cancer three months ago, and how he can enhance his technique on conveying the medical information.

Gravitas Ventures has unveiled the following synopsis for ‘To Err Is Human’:

The number three leading cause of death in the United States is its own health care system. Medical mistakes lead to as many as 440,000 preventable deaths every year. Directed by the son of late patient safety pioneer, Dr. John M. Eisenberg, ‘To Err Is Human’ is an in-depth documentary about this silent epidemic and those working behind the scenes to create a new age of patient safety. Through interviews with leaders in healthcare, footage of real-world efforts leading to safer care and one family’s compelling journey from tragedy to triumph, the film provides a unique look at our health care system’s ongoing fight against preventable harm.

ShockYa is premiering an exclusive clip from writer-director-producer Mike Eisenberg's medical documentary, 'To Err Is Human,' which is titled 'Practice.'