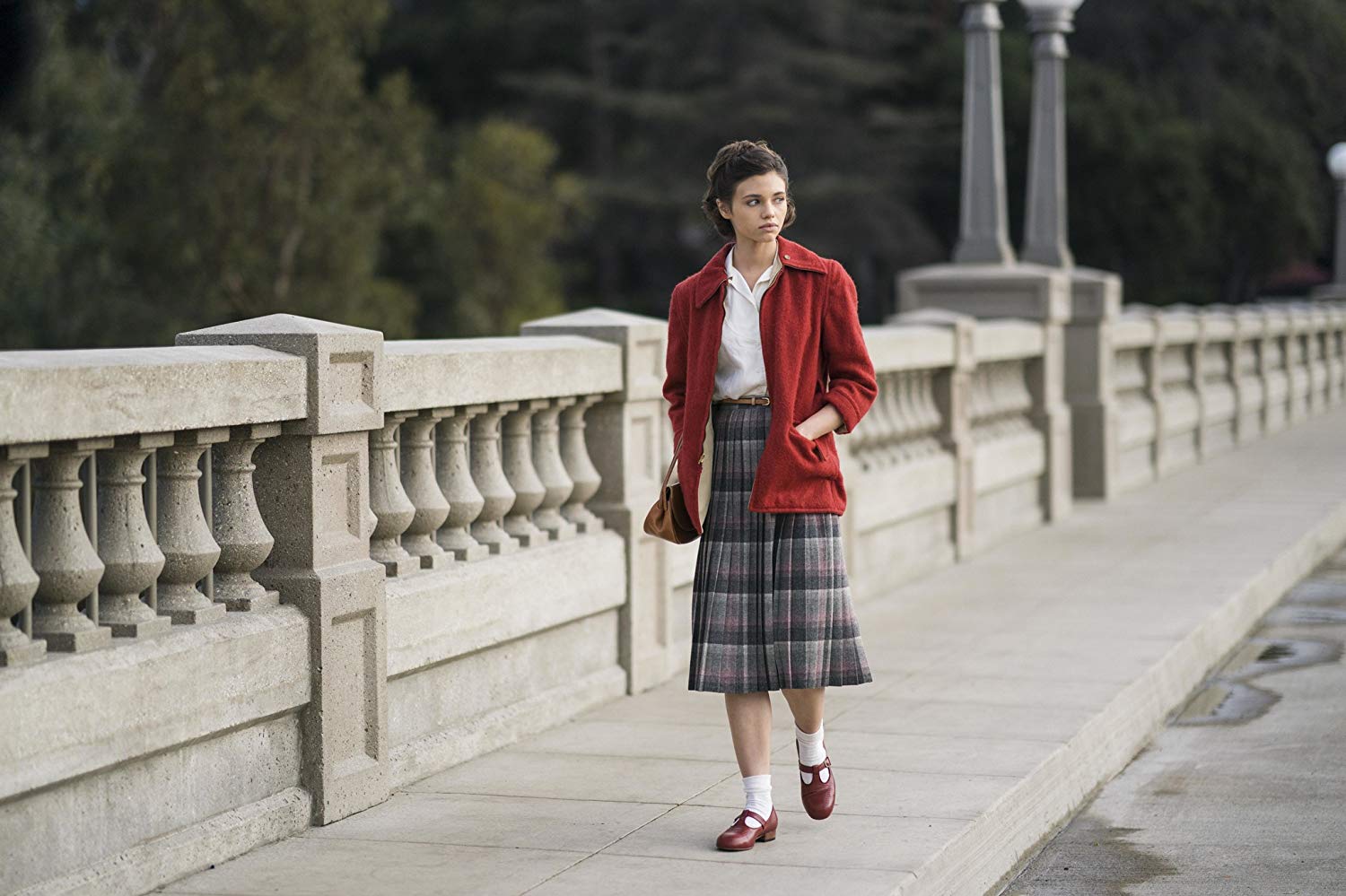 A young woman has made a discovery that will lead her to question everything she thought she knew in her life. The secrets of her past will be unveiled in the new retro noir limited television series, ‘I Am the Night.’ The highly anticipated six-part suspense drama is inspired by the real life story of the late Fauna Hodel, who’s passionately played by up-and-coming actress India Eisley in a career-defining and breakout role.

The crime show, which emotionally and intensely follows Hodel’s cross-country journey to uncover her true identity, is set to premiere tonight at 9pm (ET/PT) on TNT. Filmmaker Patty Jenkins (‘Wonder Woman,’ ‘Monster’) directed the first two episodes of ‘I Am the Night,’ which was written by Sam Sheridan. The psychological thriller’s male protagonist, disgraced Los Angeles newspaper reporter, Jay Singletary, is portrayed by Chris Pine. In addition to starring in the series, the actor, along with Jenkins, also served as executive producers on all six episodes.

‘I Am the Night’ follows 16-year-old Fauna, who grew up as Patricia Ann Greenway, outside Reno, Nevada. She’s not only contending with the social stigma of being poor and biracial in the mid-1960s, but also trying to maintain a healthy relationship with her black, single, alcoholic mother, Jimmy Lee (Golden Brooks).

As Patricia, Fauna lives more-or-less comfortably with the mysteries of her origin, until one day she makes a discovery that leads her to question everything. The teen girl uncovers the fact that she was actually adopted by Jimmy Lee under puzzling circumstances, and that her birth name is Fauna Hodel. She also learns that her birth mother is Tamar Hodel, a young woman from a prominent white Los Angeles family.

Deciding to now go by her birth name, Fauna begins to investigate the secrets of her origin, and decides to visit the California city to do so. Once she arrives in L.A., Fauna meets a ruined reporter, Jay, who’s haunted by the case that ruined his career. Together, they follow a sinister trail that draws them to an infamous gynecologist, Dr. George Hodel (Jefferson Mays), a man who’s involved in some of Hollywood’s darkest debauchery, and possibly, its most infamous unsolved crime: the murder of the Black Dahlia.

Eisley generously took the time recently to talk about starring in ‘I Am the Night’ during an exclusive phone interview. Among other things, the actress discussed how she was drawn to playing Hodel because not only was the real-life woman courageous in her determination to find answers about her biological family, but the performer was also intrigued in the prospect of collaborating with Jenkins, Sheridan, Pine and the rest of the cast and crew. Eisley also expressed her gratitude to Hodel’s two daughters, Rasha Pecoraro and Yvette Gentile, for guiding the cast and crew in the portrayal of their mother’s young life.

The conversation began with Eisley explaining why she was interested in playing Hodel in ‘I Am the Night.’ “The role came about like any other audition, through my agent. After I read the breakdown and description of the job, I looked further into Fauna’s life, I realized that there isn’t any other story like it. There also isn’t any other person like her.”

When the actress also “saw that Patty Jenkins was directing it, there was an immediate spark of interest in me,” she revealed. “I thought, if there’s even the slightest chance that I can be in this, that would be an absolute dream. So Patty was the main draw.

“Plus, getting to work with not only Patty, but also the rest of the cast, who I have the upmost respect for, was amazing. The writing’s also great; Sam Sheridan’s a wonderful writer,” the performer also admirably gushed when she delved into talking about her co-stars and the crew. She added with a laugh, “There weren’t any drawbacks to the job!”

Eisley then followed up on what her experience of collaborating with Jenkins as a director was like on the set. “It was an absolute dream. On a professional level, ‘Monster’ made a big impact on me when I was younger. It’s one of those films that when I watched it, I thought, that’s what I want to do, because it looks fun and incredible. It’s one of those raw films that stays timeless with me,” the actress shared. “Then on a personal level, I feel very fortunate to know her, just as a human being. She’s a one-of-a-kind person.”

The performer then admitted that she didn’t know who Fauna was before she brought her story to the small screen. “But I’ve always loved crime shows and mysteries. So when I saw the name Hodel before I booked the job, I thought, that name sounds so familiar. Then I Googled the name while I was preparing to audition, and saw the name George Hodel. I then remembered seeing a special about the Black Dahlia, on which he was featured,” she divulged.

After Eisley was later cast in ‘I Am the Night,’ “I went on Amazon and ordered Fauna’s book (‘One Day She’ll Darken: The Mysterious Beginnings of Fauna Hodel’), and I read it cover-to-cover. It wasn’t so much researching anything in particular; it was mainly for me to know where she was emotionally at, so that I could convey that as best as I could.”

Eisley then revealed that there were some differences between Hodel’s real life and on-screen persona. “The initial circumstances that she’s in that we show are true. But ultimately, Fauna had a discussion with Patty and Sam, as well as her daughters, who all green-lit the show,” about what they would feature in the drama.

“If they included all of the details of her life, they wouldn’t have been able to make this as a limited series. If we covered her whole life, we would have also needed to show her having her daughters, and the story would have gone in a completely different direction,” the actress explained.

“So I think that they wanted to capture the aspects of what she was going through, and how resilient she was, as a teenager. She was such a strong soul to deal with such a bizarre situation,” the performer pointed out.

Further speaking of Fauna’s two daughters, Eisley shared that Pecoraro and Gentile were both on the set “for a good portion of the show’s filming, which lasted for about five-and-a-half months. The two of them, Rasha and Yvette, are such special souls. I’m lucky that they’ve become good friends of mine after this experience,” the actress emotionally shared.

“Having them on set was absolutely wonderful, because they carry what I can only imagine to be Fauna’s energy. They’re also very kind and warm. So it was a joy and a big help to have them around, because they also causally told me little things about their mother, without me even asking,” the performer added.

Eisley then further delved into what her experience of collaborating with her castmates was like on the set. “We didn’t have much rehearsal time, because we had such a tight shooting schedule,” she revealed. But she cherished the fact that “The first person I really started working with was Golden, which was absolutely wonderful. I don’t think it could have gone any other way, because our onscreen relationship really informed both of the characters.”

***SPOILER ALERT***“I didn’t start working with Chris until well into the shooting schedule,” the actress also admitted. “So it was interesting to introduce his character to my character” during the third episode of the six-part show.***END SPOILER ALERT***

“Overall, the other actors who I worked with were absolutely wonderful. They’re all so fantastic in their roles,” the performer also gushed about her costars. “So everything felt natural. This series is one of the best experiences I’ve had as an actress.”

Eisley then called the relationships that her character has with both of her mothers “two completely different things. But both relationships that we show on screen are based in reality,” she noted. “There wasn’t much guess work involved, because Rasha and Yvette confirmed much of the details.

“The relationship that Fauna has with Jimmy Lee is very complex, but it was so easy working with Golden. There’s just so much going on between the two characters that you just naturally respond. They care about each other very much, but they miscommunicate all the time,” the actress explained. “Their conversations always result in at least one of them getting angry. There were a lot of frustrations between the two of them.

“Then the relationship that Fauna has with Tamar is equally as complexing, but in an even more heartbreaking way. Thinking about what they both went through at such a young age was heartbreaking,” the performer further admitted.

Besides the complicated relationships that her character has with both the mother who raised her and her birth mother, Eisley was also drawn to the fact that Fauna is such a resolute female protagonist. “If I was in her situation, I would have been a mess,” the actress admitted. “I wouldn’t have been able to handle it at all. I wouldn’t have been strong or resilient; I would have crumbled, as would most people, I think. So I admire that characteristic in her, which will always live on.”