Balancing comedy and emotional storytelling isn’t an ability that all filmmakers always naturally possess as they strive to tell a relatable, true-to-life tale that audiences can truly understand. But director Peter Segal has effortlessly maintained that magical combination throughout his career, having helmed such hit comedies as ‘Get Smart, ’50 First Dates’ and ‘Anger Management.’ His latest movie, ‘Second Act,’ also perfectly brings Jennifer Lopez back to her own golden era of inspirational comedy films in the early 2000s, as it highlights her protagonist’s determination to achieve both her personal and professional dreams.

STXfilms and Universal Pictures Home Entertainment are distributing ‘Second Act’ on Digital today, as well as on Blu-ray Combo Pack, DVD and On Demand on Tuesday, March 26. The special features on the Blu-ray, DVD and Digital include ‘Connecting with Milo Ventimiglia,’ during which viewers will see how Lopez and Ventimiglia connected on and off screen. ‘The Empowering Women of Second Act’ offers an inside look at how the women of the film empowered and supported each other. ‘Friendship On and Off Screen’ shows how real life best friends Lopez and Leah Remini had fun on set, and how their real chemistry played on screen. ‘Working with the Ones You Love’ offers a behind-the-scenes look at how the whole cast had fun while filming the comedy.

‘Second Act’ follows Maya (Lopez), a middle-aged big-box store employee who isn’t given a promotion because she never completed her high school degree. She lives with her adoring boyfriend, Trey (Ventimiglia), who wants to have children, even though she’s hesitant to start a family, which put pressure their relationship. However, Maya has reasoning for not wanting to expand their family; she gave up her baby daughter for adoption many years ago, but hasn’t had the courage to tell her boyfriend.

When her best friend, Joan (Remini), throws a surprise birthday party for her, Maya hopes that her street smarts will be more valued in the corporate world, and allow her to achieve the job she desires. Her wish appears to come true when Joan’s tech-savvy stepson, Dilly (Dalton Harrod), secretly modifies Maya’s résumé, in order to make her more appealing to employers. With her new supposed experiences of being an Ivy League graduate and Peace Corps alumna, Maya attracts the attention of Anderson Clarke (Treat Williams), the CEO of a cosmetics corporation that’s trying to rebrand.

Anderson’s adopted daughter Zoe, (Vanessa Hudgens), is also employed at the company. When Maya is hired off of her fake work experiences and education, the two become the other’s main competition, as they’re both working on the creation of a new organically sourced beauty product line. Along the way, Maya must not only prove her ability to help reinvent the company, despite her rivalry with Zoe, but also her capability to become the woman she wishes, and Trey knows, she can be overall.

Segal generously took the time recently to talk about directing ‘Second Act’ during an exclusive phone interview. Among other things, the filmmaker discussed that he was drawn to helm the comedy because he not only wanted the chance to collaborate with Lopez on a film, but he was also interested in making an inspirational story about women in all situations being able to pursue their goals. He also noted that he thinks that the bonus features will make the movie even more special, as viewers will be able to further witness the chemistry the cast members had with each other on the set.

The conversation with Segal began with him sharing how he became attached to direct ‘Second Act.’ He admitted that he “was actually on my way to Berlin to make another movie, and I stopped off in New York to meet with Jennifer and her producing partner. ‘Second Act’ originally wasn’t supposed to go for another year. But then as I went on to Berlin, that particular project fell apart, so I called them back and said, ‘I might actually have an opening. Do you guys thinks you may move up shooting a year?,'” the director revealed. “So that was the irony of how it started.”

What Segal “was really attracted to in ‘Second Act’ was that it felt like a throwback to a movie that I had grown up with that isn’t being made anymore. Mike Nichols is one of my favorite directors, and ‘Working Girl’ has echoes of the same DNA to the story in ‘Second Act.’ But there were also differences that I thought made it fresh,” he divulged. “That, along with working with Jennifer, who I hadn’t seen in this type of movie in many years, was very appealing to me.”

While the story about how an experienced, quick witted and perceptive employee like Maya deserves to be considered for a promotion, despite her lack of a college degree, the film also features feel-good humor. The filmmaker then explained why it was important to him to include that comedy in a story that’s so relatable to people’s struggles to advance their careers. “Well, I think there are some interesting messages in the movie about how we’re a culmination of all of the decisions that we make in our lives, both good and bad,” he revealed. “Those decisions put us in a place where we should be in life. I think that sometimes we can feel sorry for ourselves, and think, why didn’t I get the same break as somebody else?”

But Segal feels that “people should appreciate that they’re in a place for a certain reason. This story follows a Cinderella type of template, in the sense that this character gets to experience a world on the other side of the fence, where she thinks the grass is greener, under false pretenses. So she has to learn to come to terms with those false pretenses, and how they affect the other characters around her. In doing so, I like that we see women working together as friends, and are supporting one another as they’re trying to go after their dreams later in life,” he admitted. “Maya gets the support of very strong women in her neighborhood and life. I thought it was the right time for a story like that.”

The helmer then delved into what the casting process was like for the comedy’s supporting actors, including Remini and Ventimiglia. “Well, Jennifer was obviously the anchor of the film, as she was attached when I came on board. The casting for this movie was fairly simple. For the role of Joan, we didn’t need to look any further than Leah Remini, because Joan is Maya’s best friend, and Leah is Jennifer’s best friend in real life, and Leah’s hilarious. So the chemistry between the two actresses was already built in,” he shared.

“Milo was someone who Jennifer had wanted to work with for a long time, and we’re all big fans of his work on ‘This Is Us.’ So that was just a phone call,” Segal explained. “So the overall casting process was fairly streamline. The main roles were decisions that we made pretty quickly.”

Since ‘Second Act’ is driven in large part by its comedy, the filmmaker then delved into what the process of working with Lopez and the rest of the cast to create the humor was like. He noted that in particular, he encouraged them to improvise on the set. “I like to hire actors who are adept at improv, because I always think that makes a scene strong and better, and the characters more real. So everyone, from Annaleigh Ashford, who’s a two-time Tony Award-winner, to Charlyne Yi, Leah and even Larry Miller, all have the ability to bring something beyond the page. I definitely encouraged them to improv on a daily basis, because I think it makes any film better,” he revealed.

The experience of setting and shooting the comedy in New York was something that Segal also cherished. He then delved into what the process was like of shooting the movie in the city was like. “I was born and raised on the Upper West Side. While I’ve gotten to shoot in Manhattan on several of my movies, it’s usually only for a short period of time. I’ve never had the opportunity to do an entire film in New York, so that was a bucket list thing for me,” he admitted.

“Also, getting to shoot in New York in the fall was even better. I was able to live in a world of iconic movies that takes advantage of Central Park, like ‘Kramer vs. Kramer’ to ‘Annie Hall.’ I got to shoot in places that I had been enamored with, as both someone who grew up in New York, and also a lover of films that take place in New York,” the director shared.

“But the hard part was trying to find locations that hadn’t been sow in movies before. So we tried to take advantage of new places, like The High Line, which has only been around for a decade, and locations I hadn’t seen as much,” Segal also noted.

Besides the iconic New York locations were it was filmed, ‘Second Act’ also features Lopez’s latest single, ‘Limitless.’ The filmmaker then explained what the process of deciding to include the performer’s new song on the comedy’s soundtrack was like. “We weren’t thinking about having a song by Jennifer in the movie at first,” he admitted. “Slowly but surely, however, as we put the soundtrack together, the vibe felt very organic and bluesly. At the end, we felt that there was an opportunity to include a song with a little bit more of an inspirational message that reflected the theme of our story.

“That’s when I politely suggested to Jennifer that if she was interested in contributing to the soundtrack, that would be something that could be really special,” Segal shared. “That’s when she sat down with Sia and wrote ‘Limitless,’ and it turned out to be a special, last-minute addition to the movie.”

With ‘Second Act’ being released digitally today, as well as on Blu-ray, DVD and On Demand later this month, the helmer also shared what the experience of distributing the comedy has been like. “It’s been harder and harder to get people off their coaches to go to a theater recently,” he pointed out. “The fact that we’re approaching a $75 million worldwide theatrical box office gross, and the movie was made for a little under $16 million, is thrilling to me. All filmmakers want their movies to be seen in a theater.

“With that being said, many people have told me that this is a movie that’s going to be on a playlist that they’re going to watch again and again at home. That’s always nice for me to hear,” Segal admitted.

“I think there are a lot of bonus features on the Blu-ray and DVD, including bloopers, behind-the-scenes featurettes and interviews with the cast, that make the movie even more special. Viewers will sense the camaraderie the cast members had with one another on the extra features. So I think it’s going to be really fun for people who didn’t get a chance to see the film in the theater to finally see it at home,” the filmmaker gushed. 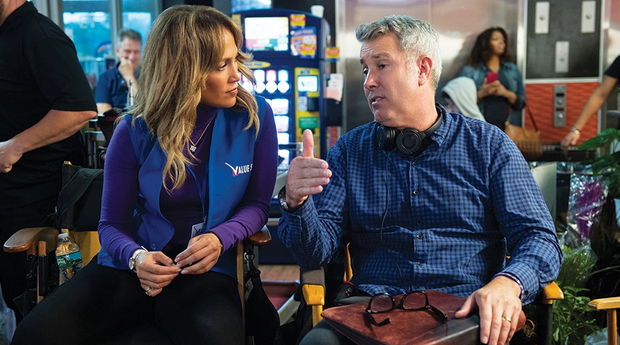