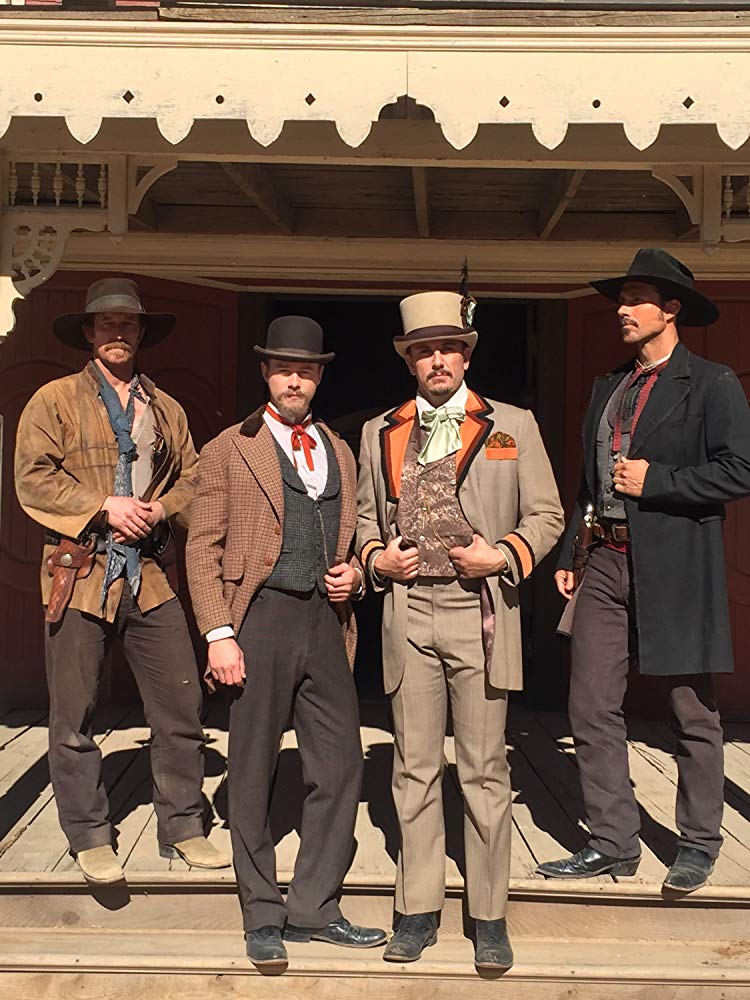 A seemingly superficial chance meeting can surprisingly lead to a multitude of people’s ultimate date with destiny. That’s certainly the case for the diverse characters in the new action film, ‘Big Kill,’ whose initial wild ride ultimately leads to a fight for survival. The characters’ powerful transformation is intriguingly highlighted in the Western, which was written, directed, produced and co-edited by actor Scott Martin. Their journey can now be witnessed, as Cinedigm is releasing the movie today On Demand, Digital HD, Blu-ray and DVD.

Set after the death of his wife, ‘Big Kill’ follows Jim (Christoph Sanders), an accountant, as he travels from the East to join his brother in business. Jake (Martin) and Travis (Clint Hummel), two misfit rogues with one foot on each side of the law, have come from the south after being run out of Mexico under a hail of gunfire. What they find in the West is a wild ride, a fight for survival and a moment of decision that will change them all forever.

Martin generously took the time recently to talk about writing, directing, starring in and producing ‘Big Kill’ recently during an exclusive interview over the phone. Among other things, the filmmaker discussed how even though he had only helmed one feature before his current action project, he felt he was prepared to delve into directing ‘Big Kill,’ because he enjoys the Western genre, and its story had been forming in his mind since he first wrote the script over a decade ago. He also expressed his appreciation over the hard work the rest of the cast and crew put into developing and filming the drama, and how happy he had such a devoted and talented group around him to help him bring the story to life.

The conversation began with Martin explaining how production on ‘Big Kill’ started. He revealed that he “wrote the script about 12 years ago. We thought we were going to make it back then, but ultimately didn’t” shoot it at the time. “So I set it aside, but always wanted to make it. Recently, the opportunity to make a Western popped up, so I took this script out and said, ‘We need to make this one!’ I did a little polish on it; I didn’t do much, but updated some of the dialogue, and then went off and made it.” The scribe added that he’s “a big fan of the (Western) genre. It’s probably my favorite genre, as I grew up on them.”

Like with his earlier projects, in addition to scribing the script, Martin also directed the feature. He then delved into how working on developing the story influences his helming approach on the sets of his movies. “When I originally wrote the script, I wasn’t planning on also directing it,” the writer-director admitted. “I didn’t really have the experience to direct it at that time. I was just on board to play the role of Jake.

“But I have produced quite a few movies, and written a few scripts since then, and directed another movie (the 2012 action war film, ‘Battle Force’). When the opportunity to finally make this film came up, so did the chance to direct it. I knew it so well, as I had been thinking about the story, and how I would make it, for over a decade,” the filmmaker noted.

“So it just made sense for me to direct the picture, and take it from the script stage to working with the cast and crew. It was so fun to work with them, because it was like we formed a family,” Martin shared. “I think the DP (Director of Photography), Mark Atkins, did an incredible job. I love the look of the movie. Dawn Ferry was our production designer, and I’ve worked with her a few times before, and also enjoy her work.”

Another experience of filmmaking that the helmer also cherishes is the casting process, and then getting to collaborate with the actors. “You get to bring on veteran actors who ultimately bring something to their characters that you weren’t expecting,” he pointed out. “It’s so exciting, because you may not have thought about things in the same way that the actors did. What they think up may be even better!”

Then further delving into the experience of finding the right performers for each role, Martin offered more insight on how he helped chose which actor would best suit each character. “When it came to the characters of Jake and Travis, with myself playing Jake and Clint Hummel playing Travis, we’re the two actors who have been attached to the project since I first wrote it. Then when it came to casting K.C. Clyde as The Mayor, which is one of my favorite characters, I just wanted the best person for the role. Overall, that was also true for all of the characters.

“I’ve known a lot of the actors who are in the film for many years in the industry, particularly through acting classes and shows. So when it came time to cast the character of Jim, Christoph Sanders came to my mind. At the time, he was primarily known for comedy, as he stars on Tim Allen’s show, ‘Last Man Standing,'” the filmmaker pointed out. “He plays this sort of dumb character on the show, so no one has really gotten to see his acting chops. So I was excited to be able to show what he can do, because I think he’s an incredible actor.”

When Martin and his fellow crew members started looking to cast the character of Johnny Kane, “we knew that he was the heart of the movie. The first choice to play Johnny was Lou Diamond Phillips. I think he has so much charisma about him that just leaps off the screen,” which is beneficial for a character like Johnny, the director explained. “You want everyone to see Johnny, because he’s dangerous and flamboyant. So we sent Lou the script, and he liked it a lot and wanted to do it. So I was thrilled when he joined the picture.

“We also got Jason Patric to play The Preacher. Jason’s a very cerebral actor, which is perfect for a character like The Preacher. It was a lot of fun working with him, and seeing his take on it,” Martin also shared. “We went through all his scenes, and over his dialogue, before we began shooting, to make sure we had his vision of the character,” he also noted, before he added that it was fun to work with the actors on developing the characters once they were cast.

“Of course, we also got Danny Trejo to play General Morales. He’s such a nice guy,” the filmmaker exuberantly shared. “He walked onto the set and was all smiles and happy to be there. He was a joy to work with, and we were thrilled to have him.”

In addition to writing and directing the film, Martin also portrays Jake in ‘Big Kill,’ like he previously mentioned. He then further delved into why he decided to also star in the project, and how he balanced helming and acting on the set. “I could only do both if I had a strong team around me. My DP, producing partner, line producer and first AD (Assistant Director) were good people who had my back. So going from planning everything out with the crew, and then jumping over to the actors, and talking about the characters,” was something the performer-helmer contended with on a daily basis.

With a hint of a laugh in his voice, Martin added, “So then stepping into the scene with (the other actors) was definitely interesting. It kept me busy, but I loved it! In order to do something like this, we also had to have experienced actors who are professional and know what they’re doing, and that’s what we had.”

The filmmaker also discussed what his experience of balancing producing the action Western, while also directing, and starring in, it. “The two things that really butt heads are the acting and directing on the set. In terms of the producing, I was involved in that aspect during pre-production.”

Martin added that “once we started production, my producing partner, Michael Slifkin, really took over. Our line producer, Erica Steele, is also fantastic, and we worked with her a lot. So they really ran the show, from a producing standpoint. That was good, because I didn’t really have time to be involved in all of that everyday.” He also noted that “As a director, you always want more. But on the business side of things, you need someone to counteract that while you’re shooting.”

Another experience that Martin relished as a filmmaker was being able to make the drama on real ranches in and around Sante Fe, New Mexico. “I loved shooting in Sante Fe, as well as New Mexico in general. The crew was wonderful and very experienced. The local cast was also talented. The locations are stunning and gorgeous, and we ended up having a really good experience there. I’d go back there in a heartbeat!”

The director-producer also expressed his appreciation that ‘Big Kill’ has received the On Demand and Digital HD releases, in addition to its disc distribution. “It’s wonderful to have this many platforms and places to allow people to see the work we’ve done, and hopefully enjoy it.” He also pointed out that “The industry is obviously changing, but this change in release is obviously creating a lot of new opportunities. It’s not only allowing filmmakers to get their pictures out there, but also offering audiences the chance to discover new movies that they may not have otherwise found. So this distribution model is offering a lot of new opportunities, which is nice.”