Ai Weiwei: Yours Truly Exclusive Film Poster Premiere Sets Out to Prove the Existence of Justice

Engaging the public in continuous conversations about human rights and personal freedom is one of the most important elements of modern culture. Fearless activist, Ai Weiwei, is encouraging people of all statures to not only take part in those discussions, but also do at least one small thing everyday that proves that justice truly does exist. His fight for equality and due process in all societies is highlighted in the new documentary about him, which is titled ‘Ai Weiwei: Yours Truly.’

In honor of the feature about the artist and his search for cultural integrity preparing to have its World Premiere special Marquee Presentation screening during this month’s San Francisco International Film Festival, ShockYa is exclusively premiering the movie’s poster. ‘Ai Weiwei: Yours Truly,’ which was directed by Cheryl Haines, is set to premiere during the festival on Sunday, April 14 at 7:30pm PT at the Castro Theatre in San Francisco. Ai Weiwei will be in attendance at the screening.

The story of ‘Ai Weiwei: Yours Truly’ begins with the remarkable exhibition @Large: Ai Weiwei on Alcatraz, organized by Haines, who served as the curator. Following Ai Weiwei’s detention by the Chinese authorities, the outspoken artist and activist transformed the former island penitentiary with an exhibition that engaged nearly 900,000 visitors in a conversation about human rights and personal freedom.

One of these artworks, ‘Yours Truly,’ invited the public to compose messages to prisoners of conscience around the world. By the time the exhibition ended, over 90,000 postcards had been sent. The film follows these postcards around the globe—from Alcatraz Island to Beijing, Washington, D.C. and Cairo—as former prisoners of conscience and their families discuss their difficult choices and the comfort they took from personal postcards reminding them that they were not forgotten.

Ultimately, the film is a call to action through a simple act. It extends the reach of Ai Weiwei’s art and urgent call for freedom from injustice and oppression, as visitors pick up a pen and personalize the core principles of global human rights. 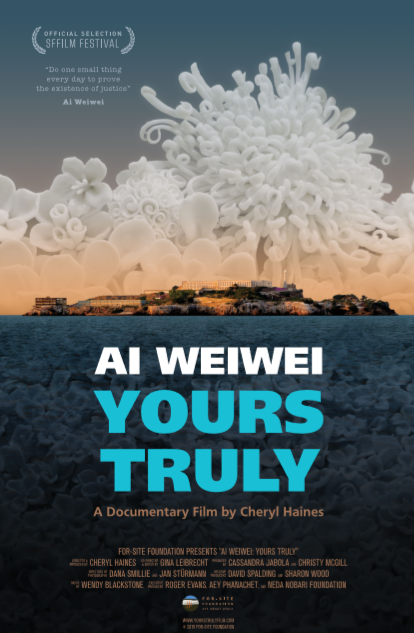