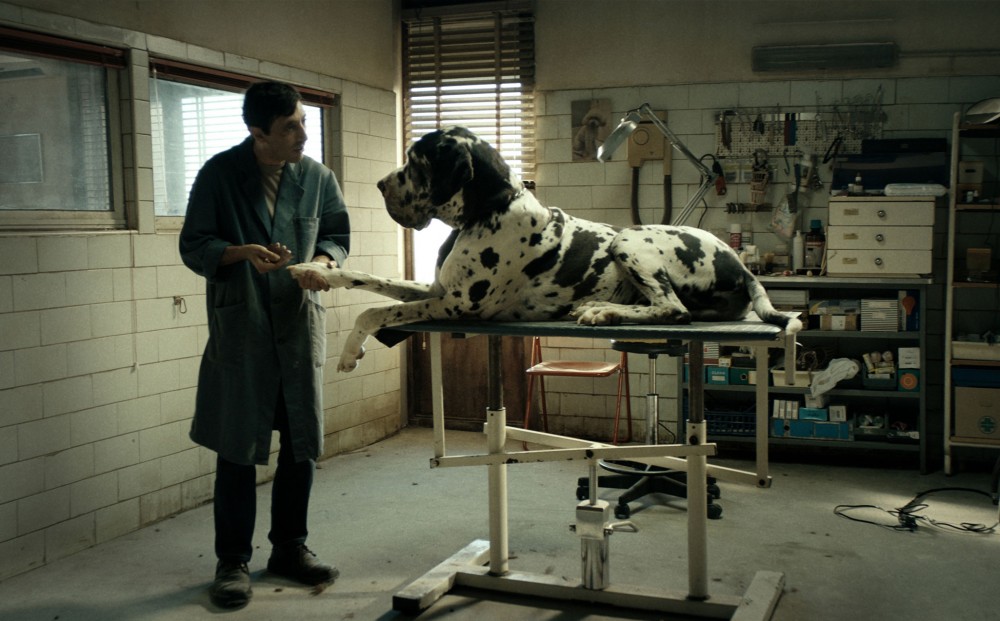 “Dogman” is the movie that won the “Palm Dog Best Canine Cast” during the prestigious Cannes Film Festival in 2018. If that’s not a reason to run to the theater I don’t know what is. Maybe I do: the picture also gave Marcello Fonte the Best Actor award at the Palm Springs International Film Festival this year and the aforementioned Cannes Festival as well. If you’re still not convinced, consider whether you’d like the films made by Matteo Garrone. The director’s well-named “Gomorrah” a few years back deals with the Napolitano mafia, is full of violence (obviously), and has the additional scare for audiences when the title “Gomorrah” shows up on covering the entire screen.

You’re still with me? You have no problem with extreme violence? And maybe you like dogs enough to watch canines of all sizes getting groomed? But you’re queasy when one chihuahua is tossed into a freezer praying to be rescued and defrosted, especially if his savior could be the Cannes Film Festival’s Best Actor? You’re set for an interesting time at the movies.

The tale focuses primarily on Marcello (Marcello Fonte), a milquetoast, an easily bullied fellow, who makes a living grooming dogs in a godforsaken shop called Dogman in a sh*thole of a town outside Naples. He has a daughter of about nine years, Alida (Alida Baldari Calabria), who is the most mature character in the movie, regularly promised by her dad to take her on a trip to the Red Sea but settling for scuba-diving in a nearby watering hole. He wants to fulfill this dream and is lured into selling cocaine to make the needed money, and he is also more or less forced into more criminal activity by the town bully, ex-boxer Simone (Edoardo Pesce), a bruiser of a guy that some in the community would like to kill. This Simoncino is such a brute—I hesitate to use the term “animal” unless you compare him to the pit bull that opens the movie ready to tear into Marcello’s throat—that in one scene he virtually kills his mother, (Nunzia Schiano) with an outrageous bear hug. Still, she deserves the treatment for tossing her dear boy’s cocaine into the air (though Marcello is forced to sweep it up).

When Simone insists that wimpy Marcello take part in robbing Marcello’s friend Franco (Adamo Dionisi) who runs a gold-buying service next door to Dogman, the stage is set for a disaster that will bring Marcello down and lead to an act of vengeance that has unintentional consequences.

Nicolaj Brüel’s lenses capture the action in Caserta, Campania, Lazio and Rome, though the principal location probably had its last batch of tourists during the time of the Caesars. There is an indication that metaphoric use is made of the town since it’s almost inconceivable that anyone in the culture-rich nation of Italy would live there—and maybe (metaphor alert) nobody does. “Dogman” was Italy’s Oscar candidate for movies opening in 2018, though the rich assortment of imports made it impossible for the pic to get a nomination. Subtitles are clear, as the only words of English are spoken to a dog as in “sit” and “stay,” though those are about the last words you’d use in the presence of Simone.