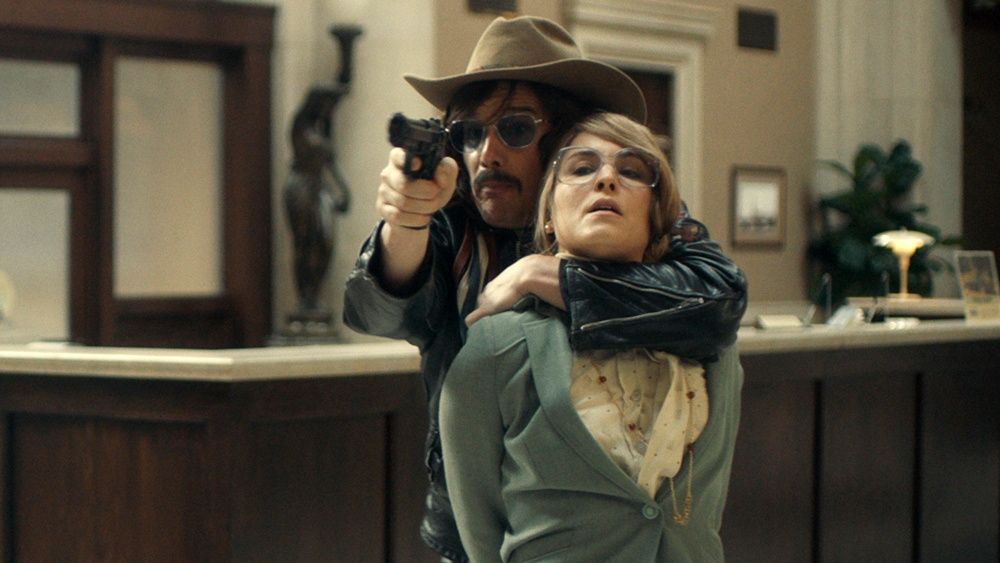 If you’re American, you may have thought that the Patty Hearst case was the first time the concept of Stockholm Syndrome was used.
The most famous case of Stockholm Syndrome in America occurred in 1974 when Patricia Campbell Hearst was kidnapped by members of the Symbionese Liberation Army, which took her hostage to gain the release of some imprisoned members of the group. She bonded with her captors, called her granddad, William Randolph Hearst, a fascist, took up a machine gun and robbed businesses and made explosive devices, all allegedly in voluntary service to the SLA. However the first time the concept was used was in 1973 involving a hostage situation in the main bank of Stockholm, Sweden.

Budreau, whose “Born to Be Blue” about the reimagining of Chet Baker’s jazz comeback in the sixties, now departs wholly from that biographical subgenre to tackle what is unlikely the first case in which a hostage bonds with her captor, but is the first time that the “Syndrome” term was used. Ethan Hawke departs from his restrained performance as a minister grappling with despair in “First Reformed” to go over the top, and Noomi Rapace shucks her over the top performance as the “Girl with the Dragon Tattoo” to play a meek bank clerk. “Stockholm” is off and running when Lars Nystrom (Ethan Hawke) adjusts his fake, hippie-style hair, combs his mustache, strolls into Stockholm’s central bank, removes a machine gun from his duffel, fires a few shots at the ceiling, and give every impression that he’s out for money. He does ask for a million, but his real goal is to get the cops under chief Mattsson (Christopher Heyerdahl) to free his bank robbing pal Gunnar Sorensson (Mark Strong) from jail.

As the two criminals settle in for what will be five days and the police occupy the second floor of the bank, Lars both terrorizes and comforts his two hostages, Claire (Bea Santos) and Bianca Lind (Noomi Rapace). As a wife and mother, Bianca would not seem the type of person who would be taken in by Lars, except that Lars is the kind of person that women say they’d like to have fun with but not marry, while Bianca’s husband Christopher Lind (Thorbjørn Harr) is the groomed, steady type, the marriageable kind, taking care of the two kids during the hostage crisis. In the film’s most absurd moment, when Christopher shows up at the bank to see what his wife is up to, Bianca patiently gives him a fish recipe so he can return home and feed himself and the little ones.

This is the kind of movie that may disappoint thrill seekers who think it will be another “Dog Day Afternoon,” but will encourage a potential audience interested in human psychology, particularly in the surprising ways that people can react when in a situation that should inspire nothing but terror. Ethan Hawke and Noomi Rapace play off each other, convincing us in the audience that in spite of all logic, they get to do some smooching as the crisis proceeds day by day.

Almost all action takes place inside the bank, which could allow for some playwright in the future to consider the plot for the legitimate stage. The inspiration for the movie came from a New Yorker magazine article called The Bank Drama published Nov. 25, 1974 about Jan-Erik Olsson’s takeover of Sveriges Kreditbank in Stockholm, where the hostage-taker and an accomplice held 4 hostages for 6 days in Aug. 1973.

Here is an excerpt from the article “The Bank Drama” in the New Yorker magazine, November 25, 1974, which can give you a better idea of why the hostages bonded with the robbers:

Holed up inside a cramped bank vault, the captives quickly forged a strange bond with their abductors. Olsson draped a wool jacket over the shoulders of hostage Kristin Enmark when she began to shiver, soothed her when she had a bad dream and gave her a bullet from his gun as a keepsake. The gunman consoled captive Birgitta Lundblad when she couldn’t reach her family by phone and told her, “Try again; don’t give up.” When hostage Elisabeth Oldgren complained of claustrophobia, he allowed her to walk outside the vault attached to a 30-foot rope, and Oldgren told the New Yorker a year later that although leashed, “I remember thinking he was very kind to allow me to leave the vault.” Olsson’s benevolent acts curried the sympathy of his hostages. “When he treated us well,” said lone male hostage Sven Safstrom, “we could think of him as an emergency God.”

By the second day, the hostages were on a first-name basis with their captors, and they started to fear the police more than their abductors. When the police commissioner was allowed inside to inspect the hostages’ health, he noticed that the captives appeared hostile to him but relaxed and jovial with the gunmen. The police chief told the press that he doubted the gunmen would harm the hostages because they had developed a “rather relaxed relationship.”