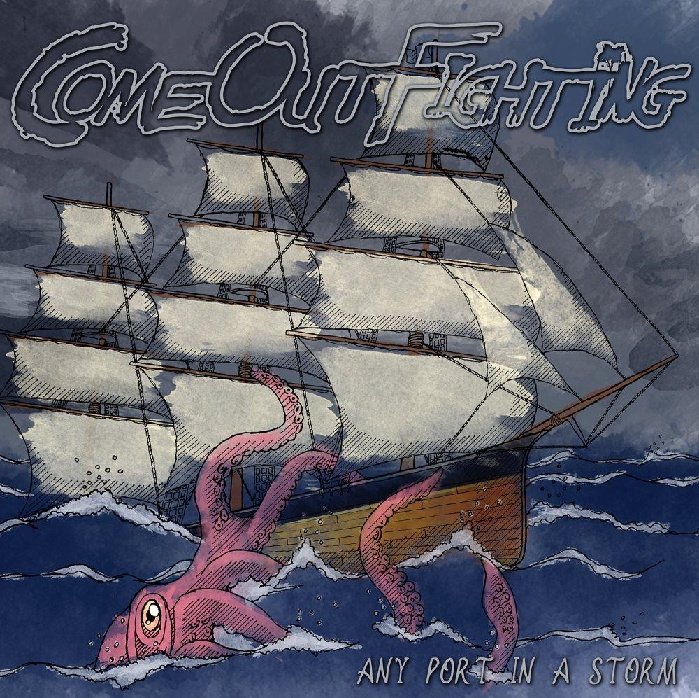 The cover for Come Out Fighting’s hardcore punk EP, ‘Any Port in a Storm.’

EP: ‘Any Port in a Storm;’ engineered and produced by Matt Dalton, co-owner of Detroit’s Rock Hill Sound

Society can often find a way to leave a lasting effect in the most unique situations and on the most surprising people. Modern culture is having a remarkable impact on the intriguing Detroit-based band, Come Out Fighting. The hardcore punk quintet is preparing for the release of their latest full-length album, ‘Any Port in a Storm,’ by debuting a two track EP preview.

Come Out Fighting’s new songs capture everything the powerhouse group has held sacred since its formation a decade ago, while also effortlessly proving that the musicians aren’t just screaming angst-fueled vocals, and bellowing intense instrumentation, of rebellion. The members of the group, which is led by singer Nick Rudowyj, is instead pondering where they fit into modern culture, and how they can battle surprising bouts of loneliness.

The ‘Any Port in a Storm’ record will be the second release in a planned trilogy of albums with a nautical theme, which acts as a metaphor for touring. The series, which began with the release of the quintet’s 2018 record, ‘Aweigh All Anchors,’ powerfully contemplates how being on the road affects the musicians, particularly how they relate to society and contend with their loneliness.

‘Any Port in a Storm’s EP preview begins with the raucous tune, ‘Blackout,’ on which Rudowyj passionate admits that he doesn’t know where he is or how he got to his present situation, or even who he is. The frontman’s vocals on the hard-core rock track are supported by Nate Jose Garcia and Brian Stewarts’ pulsating guitar riffs, Dan Bruce’s compelling bass and Casey Husted’s rhythmic drum beats. The song is driven by an intensity that often accompanies the angst people feel as they embark on the emotional journey of finding their authentic selves, and how they fit into the world.

‘Blackout’ then delves into the second tune on Come Out Fighting’s ‘Any Port in a Storm’ EP, ‘Soundtrack to a Shipwreck,’ which is driven by a classic rock vibe. The band offers another wistful and introspective insight into their lives on the track, including their personal struggle of contending with loneliness while they’re on the road.

In a genre where noisy clutter and screaming shouts of rebelliousness often pass for songs, the ‘Any Port in a Storm’ EP preview is a gripping, distinct and memorable effect that sets Come Out Fighting apart as a stunning, semi-political punk band. While the hardcore vocals and instrumentation that fuel the two tunes won’t appeal to all music fans, the two new tracks are power anthems that perfectly reflect on how society can often find a way to a leave a lasting effect in the most unique situations, and on the most surprising people.