Maintaining a powerful sense of perseverance and hope as they pursue their dreams of garnering attention for their passion is vital for any up-and-coming, and even established, person, and even establishment. That’s certainly the case for country singer-songwriters who are chasing, and maintaining, their musical careers, as well as the most celebrated business that grants their dreams-Nashville’s historic Bluebird Cafe. That epic journey of obtaining, and keeping, fame in the country scene is chronicled in the new documentary, ‘Bluebird.’

The movie marks the feature directorial debut of versatile media expert, Brian Loschiavo, who has previously worked as a songwriter, screenwriter, producer and documentary series co-creator. The filmmaker worked as Senior Producer for Disney/ABC Television Networks, which allowed him to combine his passion for music and film by co-creating the successful music-documentary franchise, ‘Nashville: On the Record,’ which grew from a digital series into three primetime specials on ABC. Through his work with the ABC/CMT musical television series, ‘Nashville,’ Loschiavo eventually fell in love with and relocated to Music City, and subsequently co-founded the Nashville and Los Angeles-based production company, Riverside Entertainment.

After being approached by Erika Wollam Nichols, the Chief Operating Officer and General Manager of the Bluebird Cafe, Riverside Entertainment signed on to co-produce a feature-length documentary about the venue’s storied history. In addition to helming ‘Bluebird,’ Loschiavo who also edited the movie, and served as one of the producers, along with Nichols and Jeff Molyneaux, the film’s cinematographer.

Set in the title suburban strip mall cafe, ‘Bluebird’ chronicles how countless Grammy Award-winning singer-songwriters like Garth Brooks, Faith Hill, Kacey Musgraves and Taylor Swift were first introduced and catapulted into the spotlight. The documentary chronicles the origin stories of music royalty, and also follows emerging musicians as they chase their dreams inside Nashville’s iconic Bluebird Cafe, an accidental landmark that has altered the course of music history, and has become one of the most influential listening rooms in America.

Loschiavo, Nichols and Molyneaux generously took the time during last month’s SXSW to sit down for an exclusive interview at The Driskill Hotel to talk about directing, producing, shooting and editing ‘Bluebird.’ Among other things, the filmmakers discussed how they decided to work together to make a movie that chronicles the title cafe’s history after the director and director of photography worked on ‘Nashville,’ on which the Bluebird played an integral part in the storyline. The trio also mentioned how they’re honored that the movie had its World Premiere at SXSW, as the festival combines films and music, and brings passionate fans of both mediums together.

The conversation began with Nichols explaining how production on ‘Bluebird’ began, and where the inspiration to make a documentary about the esteemed music cafe came from. “I took over running the Bluebird about 12 years ago, and I had previously worked there as a server in college. So I really wanted someone to document its history, as it had not yet been done. So that was about a 10-year quest to find the right people to help make it happen,” she revealed.

Loschiavo then chimed in on the development of the movie. “Jeff and I had both worked at ABC in Los Angeles, and had worked on the show ‘Nashville.’ Through that, we met Erika and worked at the Bluebird, and learned how magical and important it was. We eventually moved to Nashville, and started a production company (Riverside Entertainment),” the director shared.

The filmmaker added that “We’ve worked with Erika since then, but randomly saw her in London and had dinner with her, because there was a country music festival happening there. Over dinner, she asked us if we’d be interested in making working on the film. It was a dream project for us.”

“Like Brian said, we were lucky enough to have dinner with Erika, and she offered the project to us,” Molyneaux also noted. “She told us that there have been multiple people who have approached her with the same idea, so it was an honor for us to be chosen.”

The trio then delved into what the process of securing interviews with the musicians who are featured in ‘Bluebird’ was like. “First and foremost, we had a rockstar talent producer. Shawna Strasberg, who was central to that process. But most of all, the Bluebird means so much to so many people, and has influenced so many careers, that people feel connected to it,” which drew in the multitude of singer-songwriters who appear in the documentary, Loschiavo explained.

Nichols agreed with the helmer’s sentiment, and added that “One of the things that I think is particularly interesting is that there isn’t a musician who’s involved who doesn’t have more than surface relationship with the Bluebird. So that made it very easy, because people feel so connected to the cafe, and what it has done for songwriters, and what it means to the music community in Nashville.” The producer added that “people really wanted to be a part of the documentary.”

The process of figuring out how to tell all of the musicians’ stories and experiences at the Bluebird in the documentary was something the group worked on together. Loschiavo shared that “We had an outline of what we thought the story would be before we began shooting. We talked to Erika and Amy (Kurland), who founded the Bluebird, particularly about some stories we already knew about, and songs that had come out of the cafe. We had an initial framework of what we thought all the scenes would be, but we also had to be open to that changing,” the director admitted.

“As we heard more stories through interviews, that led to more interviews, which shifted the narrative. We would also film entire shows, not knowing what songs we’d use from that show in the movie,” Loschiavo added. “Sometimes we’d be so inspired by a performance that a song we didn’t initially think would make it into the movie became a central piece of the narrative. So a lot of it happened during the year-and-a-half that we were in production, as well as the editing process.”

The helmer also shared that “One of the shows that we captured was for a fundraising campaign, and the CMA (Country Music Association) partnered with us on it. Every performance from that evening was either nominated for, or had won, CMA Song of the Year, so they were all smash hits, from the ’80s to the present. So we had a whole night of songs that we could have put into the movie. So it was definitely a challenge to pick which songs from that show, along with every other performance we filmed, would end up in the movie,” he admitted. “We really had to focus on what story we were trying to tell, and figure out which songs would compliment the story we were sharing with audiences.”

“There were some songs, like ‘The Dance,’ that were anchor songs for the film,” Nichols also noted. “You can’t tell the story about the Bluebird without talking about how Garth (Brooks) and (writer-composer) Tony (Arata) were together when Garth heard that song at the Bluebird. That’s one of the anchor points.”

“I think that really helped tell the story,” Molyneaux also chimed in. “Having Tony and Garth in one sitting, so you can see the transition from singer-songwriter to the actual singer, was the perfect moment.”

Loschiavo then praised Nichols and Molyneaux on their work and support of him as the documentary’s director. “From a visual standpoint, I think Jeff deserves a lot of the credit for the look and feel of the film. Since the Bluehird has such a massive span of history, and there are so many stories and performances that have taken place there, my biggest challenge was to try to bring that all down into 90 minutes. I had to keep an eye on that, as we were slowly collecting interviews and performances, month after month, and not lose sight of the overall arc of the story we were trying to tell. Erika was also a big help in making sure we kept that view,” the helmer noted.

Following up on his experience of working as the director of photography on ‘Bluebird,’ Molyneaux admitted that the job “actually turned out to be a lot more challenging than I originally thought it was going to be when I was going into it. One of the things that I wasn’t ready for was the fact that we were covering live music in such an intimate venue, and we couldn’t disrupt people’s performances. So there were a lot of times that we were filming underneath tables and pianos, just to stay out of the way,” the cinematographer divulged. “But luckily, we have some really great crew guys in Nashville who were able to covertly set things up. It was just an honor to be a part of this documentary.”

The process of producing the documentary together is something the trio cherishes. “The thing that was so rewarding was that everyone had the same goal. We were all in it to tell the same story, in the best way possible…Almost al of the decisions were community decisions, and for the ones that weren’t, we were all able to understand what was being done,” Nichols shared.

The title cafe’s general manager also praised Molyneaux’s camera work, and explained that “The way he filmed was never done before at the Bluebird. We’ve had a lot of people film there, but the process of really capturing what the vibe is really like in that room, without impacting the audience’s experience, is key. As we watched everything being shot, we knew we were getting the best footage possible.”

With the way the music industry has been changing in recent years, particularly in the method that albums and singles are released, Loschiavo appreciates the fact that the Bluebird has kept its signature intimate appeal. “It has remained a community and workshop environment for musicians, when it could have easily sold out years ago, and become a place that only sells $60 or $80 tickets for only hit singers to play every single night. But the Bluebird has instead remained dedicated to supporting the next crop of songwriters, as well as some of the legacy singers who don’t have current hits anymore, but have been playing there since the ’80s So what they’ve done is very noble, and is super important to the ever-changing music industry.”

With ‘Bluehird’ having its World Premiere at SXSW, the director also expressed his gratitude of being able to bring the movie at the Austin-based film and music festival. “We’ve had our eye on SXSW as one of our only choices to have our World Premiere, since it is a film and music festival. That’s why this project means so much to me, because they’re my two passions. I think that’s why the festival programmed us later in the week, so the music attendees can also take part in it,” he shared.

“So far, being here has been a blast! We’re enjoying the community environment…Austin is also like a sister city to Nashville, so it’s almost like coming home, in a way. It’s been great being able to share the film with other music fans here,” Loschiavo enthusiastically shared. 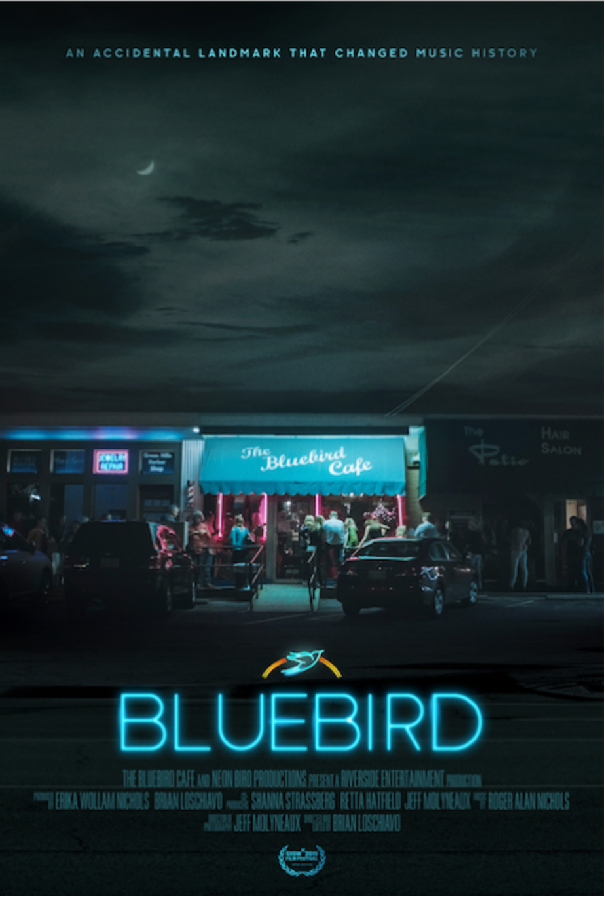