Being able to potentially connect with countless people close to home, with the help of apps and websites, has intrigued society since the internet was created. But now, with all of the numerous dating options at people’s fingertips, they have begun to ponder how they’re supposed to know who they should spend their time with in real life. The true connections and attractions between people who would have never otherwise met, if it wasn’t for dating apps and websites, that ultimately do form after careful consideration, is explored in the new romantic comedy, ‘The Browsing Effect.’

‘The Browsing Effect’ is now available on digital and On Demand, courtesy of Gravitas Ventures. The film was written and directed by Michael K. Feinstein, who also appears in the movie. In addition to Feinstein, the romantic comedy also stars Gabriela Lopez, Megan Guinan, Josh Margolin, Nikki Soohoo and Drew Fonteiro. In ‘The Browsing Effect,’ the seemingly endless possibilities of dating apps send a group of friends into a whirlwind of sex, jealousy and self-doubt as they examine dating culture in the age of swiping.

Lopez generously took the time recently to talk about starring in ‘The Browsing Effect’ during an exclusive interview over the phone. Among other things, the actress discussed that she was drawn to play Gabriela in the film because not only is she an intelligent character who’s open-minded about online dating, but the story’s also relatable to everyone who’s trying to find a real connection through the internet. She also appreciated that Feinstein was so dedicated to his vision of the characters and story he created, but also encouraged her and the rest of the cast to offer their own suggestions on their characters and the story.

The conversation began with Lopez explaining what it was about the character of Gabriela, as well as the overall script, that convinced her to take on the role in ‘The Browsing Effect.’ She revealed that “When my agent got me the audition, I read the breakdown, it said the character’s name is Gabriela, and she’s Peruvian. I thought, this is weird, because my name is also Gabriela, and I’m also Peruvian! Do they know me?!?’ So that’s what stood out to me the most when I read the script.”

When the performer then started the audition process, “I sent in a self-tape. I said, ‘Hi, I’m Gabriela, and I’m Peruvian, as well.’ So that was funny. When I then met the filmmakers, I said, ‘I really want to be a part of this movie.’ I then got the callback, and then finally booked it,” she shared.

The conversation then turned to Lopez explaining how her character of Gabriela fits into the storyline of the movie, and her views about online dating in modern society. “My character is really open and into it. She’s a law school student,” who decides to try connecting with people online because she doesn’t have much time to meet people between her education commitments. “She then meets Ben, who’s one of the lead characters in the film,” who’s played by Josh Margolin. The actress revealed that “their relationship just really starts to work, and my character is surprised by the way things happened. But she was really open-minded, and willing to trying new things and experiences.”

When Lopez first read the script, she immediately realized that “I loved this girl. She’s your typical stereotype when it comes to online dating. But I also think she’s this really intelligent girl, who has a good head on her shoulders, and comes from a good family. So I liked that she’s a well-rounded character.”

The performer then divulged that she thinks ‘The Browsing Effect’s plot is reflective of the way that people date in the current age of social media. She stated that she thinks the romantic comedy “is relatable to everyone, because we all have Facebook, Twitter and Instagram accounts, and that has affected society in general. Online dating is also a part of a lot of people’s lives.” She added that the film “doesn’t only tells one side of online dating; it shows all sides of it, and all the ways it can turn out, and not just the happy-ever-after. The story shows the downsides to it.”

Lopez added that she thinks viewers will like her character of Gabriela because she is relatable. “People will know someone like this girl, who works hard in school, and may not have time to date. Like Gabriela, people might not just be out there to hook up with someone; they may want to meet someone and have a real relationship.”

Besides relating to her character, the experience of collaborating with Feinstein was also a process that the actress found to be “incredible. Michael’s been one of the best directors I’ve worked with, because he really cares, and pours in a lot of heart and soul into the characters and script. I love the way he wrote the character of Gabriela.” When Lopez showed up for the table read, “I immediately noticed that he’s so detailed in his vision, and how he saw each character. He spoke to each one of us separately, particularly about what we wanted to bring to the characters. So it was a very collaborative of what he and I saw for my character. So it was cool to co-create with him.

Besides collaborating with Feinstein, the performer also had a bit of rehearsal time with her co-stars before they began shooting the movie. “We also has a table read, which is when I was able to meet almost everyone. I did have a chemistry read with Josh, the actor who plays Ben. We clicked immediately, and we’re still friends. Josh is such a great guy. I’ve become friends with everybody.” She added that “It was so much fun to work with people who you can play off, and who show up, willing to give you something, and run lines and improv, even before we start a scene. Everyone was wonderful to work with on the movie.”

The experience of shooting ‘The Browsing Effect’ independently was also something that Lopez cherished. “I’ve also starred in a big Sony movie, ‘The 5th Wave,’ which had a big budget. But on ‘The Browsing Effect,’ we had a smaller cast and crew, so we felt like a family. It was really intimate, and we were all close. It felt warm and friendly, and I didn’t feel pressured,” she admitted.

“On some television sets, you feel pushed for time, and we were pushed for time on this project, too, but it didn’t feel that way. We were able to take our time and breathe. So it was really nice. I loved working on an indie set like this; it was awesome,” the actress also shared.

With ‘The Browsing Effect’ now available on Digital and On Demand, Lopez feels the distribution is beneficial for a film about online dating. “I remember talking to Michael when we were making the movie, and I asked him what the distribution plan was. He said, ‘We’ll go to festivals, for sure. But the plan for the official release is for it to always live online, since it’s a movie about online dating and social media.'”

The performer added that she’s “so excited that there are so many release avenues in the entertainment industry right now, with platforms like Netflix, Hulu, Amazon, iTunes and On Demand. I purchase movies and watch them at home!,” she revealed with a laugh. “I have Netflix and Hulu, and all of my friends do, too. None of us have cable anymore; we have Apple TV, and buy movies on iTunes and Amazon. I love that choice of platforms, because they open films up to everybody.” 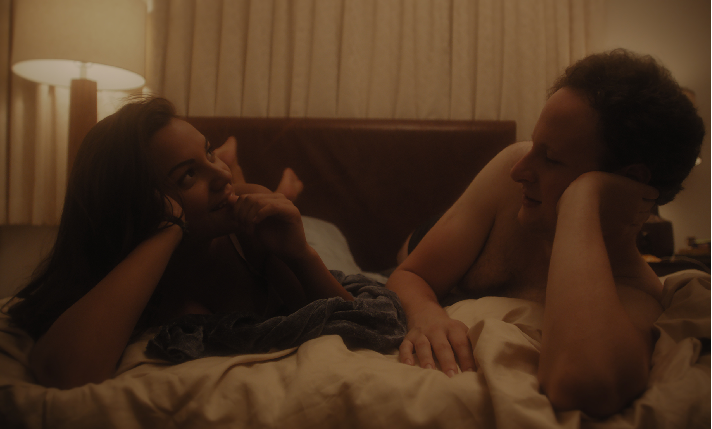