The transformative power of music, and the bonds that develop when diverse artists collaborate, should be continuously celebrated. The stunning trajectory of the professional partnership and personal friendship between two distinct artists, including both their notable successes and emotional challenges, is enthrallingly captured in the new music documentary, ‘Satan & Adam.’ The movie, which was written, directed, produced and edited by V. Scott Balcerek, basks in the title musicians’ accomplishments, while also chronicling the obstacles they had to overcome to keep their band, and friendship, together.

Following its New York City opening week theatrical release, ‘Satan & Adam’ is now playing at the Laemmle theater in Glendale, California, with a limited nationwide expansion to follow throughout May. The theatrical release comes after the documentary had its World Premiere at the Tribeca Film Festival. The movie also won the Audience Awards at the American Film Festival? and Ojai Film Festival, as well as the Nashville Film Festival ?Grand Jury Prize.

‘Satan & Adam’ follows the journey of the title blues duo, which was a fixture on Harlem’s sidewalks in the late 1980s and early 1990s. Sterling Magee played for years with such artists as James Brown, King Curtis and Big Maybelle. Magee experienced the music industry’s exploitation of black musicians firsthand; he walked away to play on the Harlem streets for “his people.” Reborn as Satan, he spread his gospel of freedom and became a New York City legend.

Adam Gussow, a white Jewish Ivy League scholar and musician, asked to join him, and both of their lives took a powerful turn. The duo took their talent on the road, and Sterling suddenly then vanished without a trace. The separation tested both men’s courage and their journey to find each other again a tale of tragedy, survival and miraculous rebirth.

Balcerek generously took the time recently to talk about ‘Satan & Adam’ recently during an exclusive interview over the phone. Among other things, the filmmaker discussed how being a musician himself influenced his decision to make a documentary that explores the professional and personal relationship between Magee and Gussow. The director also expressed his appreciation over having the movie premiere in New York City, as it allowed the title musicians to return home and reunite with their traditions.

ShockYa (SY): You directed the new music documentary, ‘Satan & Adam.’ What was it about the subject of the title blues duo that influenced you to helm the film?

V. Scott Balcerek (VSB): Will, in around 1991-92, I was living in Pittsburgh, which is where I’m from. I was editing a project for a friend of mine, who was at CalArts, and working on his thesis project.

I’m also a musician, so a lot of the things I’m interested in are music-oriented. So a friend of mine wanted me to see this act, and he said I was going to be blown away. He said they were a street act in the film I had just edited, but they were now playing in clubs. I said ‘Okay, let’s go check them out.’ When we went in to see them, I initially thought they were a full band, and the opening act. But it ended up just being the two of them, and they were making this crazy sound that was coming from five people.

I also thought there was a film in there somewhere. They had played in the streets of Harlem, but didn’t really care about fame. But they were rising up, and getting bigger and bigger. So I saw an opportunity to document that process. I wanted to show how these two completely different guys, who came from different worlds, were becoming this American phenomenon. That’s not what happened, but that’s what I thought I was embarking on.

SY: The movie features interviews with, and footage of, musicians as The Edge, as well as with Al Sharpton and Village Voice journalist Peter Noel. What was the process of determining who you would speak, and what you would ask them?

VSB: Well, I wanted someone to talk about the racial conditions in New York at that time. So I had written down Al Sharpton’s name, from as early as ’95. Of course, he was a big figure of that movement at that time, and was trying to solve issues for his people. I also heard about Peter Noel, and he had a lot of insights, as well.

I didn’t know how I was going to get (interviews with) those guys. But luckily, Al Sharpton knew of Satan and Adam, and about their music, and what it would mean for a guy like Adam to walk into Harlem at that time.

How the world then started to discover who Satan and Adam were is represented by U2 making their own documentary about coming to America, and really discovering American music. I was able to get The Edge, and he remembered seeing Satan and Adam on the street, and what that meant to U2.

SY: You also served as a co-editor on the film. What was the process of determining what footage you would include in the final version of ‘Satan &Adam?’

VSB: Since I shot the film over a 23-year period, I initially only cut tiny scenes and a trailer. But that was helpful for me to flush out what the picture could be overall. This is an in-process film; the events were happening while we were filming, and weren’t something that we could look back on, and ask people to reflect on. So it was a bit of mental gymnastics to figure out what the story was going to be, but it depended on what was happening with Satan and Adam. I felt that once they played at the New Orleans Jazzfest in 2013, that was the perfect bookend for the film, because they had originally played there in 1991.

So it was in 2014 that I took all of the footage, and started to construct the feature film, and not just stand-alone scenes. I knew where I was going with the film, so I started to spend all of my days cutting the material together. I would create notes of additional shots I could pick up while I was cutting the film. Once I cut together the whole film, I turned it over to another editor, and he did his pass on it.

That was a great process, because I started off as an editor. This was my first time directing a feature, but I have edited projects for other filmmakers. So I felt having someone come in, who was a complete outsider to the project, would help me see things that maybe I had missed, and he did a great job. At the very end, I took the project back and made some minor changes, including putting in some interviews we had shot later. It was a long process to put everything together, but I appreciated the process.

SY: In addition to directing and co-editing the movie, you also served as one of the producers. What was the process like of balancing producing with your other duties while you were working on the feature?

VSB: When I first started the project, I had another producer with me. But he had to leave later on, because he became a professor, and couldn’t really put the time in. At that time, Sterling had also disappeared.

We initially received some grant money, but I then had to pay to make the film out of my own pocket. So I produced all of the shoots, and was basically a one-man show.

So the producing part of the process included me doing the shoots with whatever money and camera format I had. In the middle of production, I couldn’t afford to shoot on 16 mm. I had received a grant to shoot on 16 mm, which looks great. When Sterling disappeared, a lot of people felt the film wasn’t going to go anywhere. But I decided to keep going, and shoot with whatever camera I could get my hands on.

So I had to produce on a shoestring budget, and just keep following the story. I decided to keep up with Satan and Adam on a personal level, and we became friends. That way, I could make sure I wasn’t missing anything. But producing this film is a wide term, as I did everything.

SY: ‘Satan & Adam’ had its World Premiere of the Tribeca Film Festival last year. What was the experience of being able to premiere the documentary in New York City, where the story largely takes place?

VSB: It was amazing, because I began shooting in ’95, and we then premiered back in New York in 2018. Tribeca is amazing, and one of the premiere festivals in the country. I couldn’t have asked for anything better.

This film could have fell apart at any moment, and it did, in many ways. So the sense of rebirth for Sterling and Adam, and having that all come together in New York City, was amazing. We actually took them back to their spot up to Harlem, and made a short film about it, which we’re going to put out at some point. Also having people approach me at the festival, and tell me that the film reminded them of the time when Sterling and Adam were playing together, was the best part of the premiere for me.

SY: Now that ‘Satan & Adam’ has played on the festival circuit, it’s receiving its official release this month. Why were you interested in having the nationwide theatrical distribution, and what has the experience of releasing the movie been like?

It belongs in theaters in some ways, especially in New York. When we decided to play it in New York, it spurned the idea to have it open wider, in theaters across the country. When we called theater owners, to see if they were interested in playing it, they were. We also started a campaign on Facebook and Twitter, and told fans that if they were interested in seeing the film in theaters, to let us know, and they did. The theater owners began to get into it, and we’re now showing in other cities besides New York and L.A.

I didn’t really expect this type of theatrical release; I thought it would end up on such digital platforms as iTunes and Netflix. But it’s great that people will be able to watch this film in an audience, because this is a shared human story. Even though many documentaries don’t get their day in theaters anymore, I think this film is an exception! 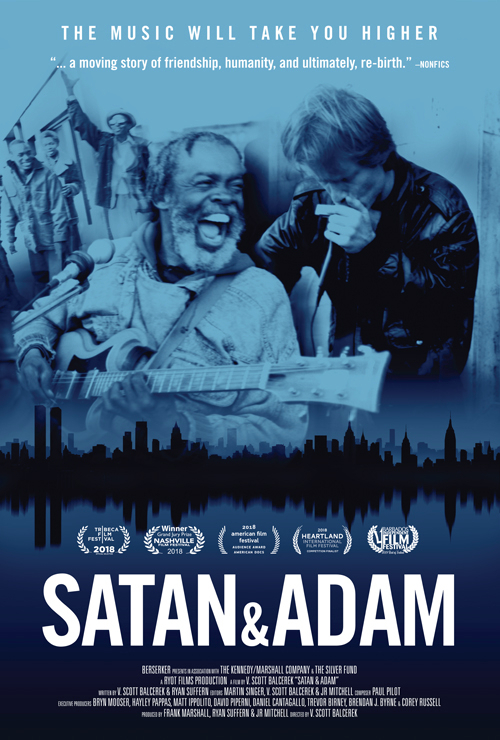