Knock Down The House Movie Review

Apr 28, 2019 ALEXANDRIA OCASIO-CORTEZ, ELECTIONS, KNOCK DOWN THE HOUSE, PRIMARY ELECTIONS, WOMEN IN THE HOUSE OF REPRESENTATIVES 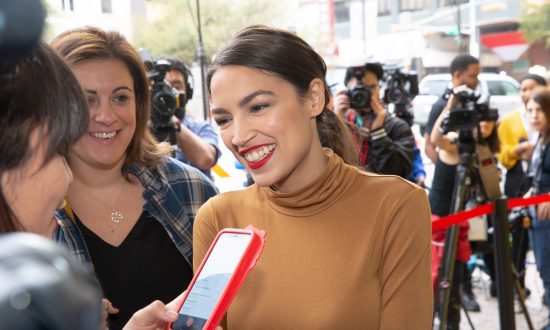 Alexandra Ocasio-Cortez is my kind of congresswoman. She favors extending the federal minimum wage to film critics. She opposes the move of the U.S. embassy in Israel to Jerusalem, but nobody’s perfect. And in six years she will be 35, eligible to run for president, intent on challenging Mr. Trump when our leader refuses to withdraw from the Oval Office after his term is up. In praise of Ocasio-Cortez and three other women running for Congress in 2018, Rachel Lears, who wrote, directs and photographs the documentary “Knock Down the House” may not be the female Michael Moore. Her straightforward doc is heartwarming (unless you voted for Crowley), and her script has none of the hilarity that you can find in every Michael Moore movie. She feels bad that three of the women she follows were defeated. From the way the four candidates are described, you get the impression that they support Democratic Party ideals to the left of the Democratic establishment—such as Medicare for All, federal government jobs guarantee, and free tuition in public colleges. And you’re welcome to boo that Senator Joe Manchin easily won his primary in West Virginia, a man who is chastised for accepting support from the coal mining companies who seem not to care that their industry has led to far more cases of cancer than we find across the country.

In deciding what to edit out of a film and what to include, a director obviously cannot give her audience the kind of information about a candidate that a book or even an article in the New Yorker can address. But there are glaring omissions in Lears’s coverage of Ocasio-Cortez, who gets the major part of Lears’s time, given the candidates charisma and the mere fact of her victory. This should have been included: that contrary to what voters might think—that Ocasio-Cortez won because Hispanics finally turned out for a woman who is ethnically Puerto Rican in numbers to defeat the 20-year incumbent. The truth is that only thirteen percent of registered Democrats showed up at the booths in June for the primary, which in the Bronx determines the winner in November as well—and more important, her stunning win of 57.5% to Crowley’s 42.5% was caused thanks primarily to well-to-do young voters who are gentrifying neighborhoods in her partly Queens district of Woodside and Astoria.

The other three women who ran in the Democratic primary in 2018 have their hearts on the sleeves but none can compare with Ocasio-Cortez as electrifying speakers. The three are also progressives running to the left of establishment Democrats, favoring Medicare for All and a better deal for working people, whose wages have not risen (adjusted for inflation) since the 1970s. And they refuse to accept corporate money, which seems self-defeating, if noble. Can you really get enough money for future campaigns from nickel-and-dime contributions from ordinary folks?

Paul Jean Swearengin of West Virginia is able to knock out one gem of a quote, stating that many Americans think that her congressional district in Appalachia is inhabited by people with “no teeth, no shoes, no brains.” She drives around her area pointing out how many people in and around Coal City, West Virginia died of cancer, presumably from the pollution caused by the coal industry. Yet she does not suggest ways that her constituents can make a living if the mines were closed down in favor of renewable sources of energy. This is perhaps why Joe Manchin, a Republican in Democratic clothing, is able to use money from the coal industry to sail to victory.

In her Missouri district, Cori Bush, denied a fair shake of Lears’s time, projects her anger at the murder by police of eighteen-year-old African-American Michael Brown on August 9, 2014 in Ferguson, Missouri. We see the famous arc, clueing us immediately that we’re in St. Louis. Meanwhile out west, Amy Vilela fights a primary against the machine politician, awash in campaign money from lobbyists. Her own daughter died when a hospital refused to treat her because she had no insurance. That’s just the kind of thing that would prompt any of us to run for political office.

Lears, with four other docs in her résumé including “The Hand That Feeds,” which finds a sandwich maker in a New York restaurant uniting undocumented co-workers to fight against abusive restaurant conditions. Lears, obviously a progressive who would not see all that much to admire among establishment Democrats, is in her métier, probably glowing about the number of women, especially of color, who have captured seats in the House of Representatives to make the 2018 legislative body the most representative of the American people. That’s not saying much, though. Shouldn’t fifty percent of the House be made up of women, rather than the present twenty-three percent? In any case, Congress now has its first Native-American woman, two Muslim women, and (back to the ubiquitous Ocasio-Cortez), at 29, the youngest woman House member in history.