Sometimes the most harrowing situations can drive the seemingly most moral person to take matters into their own hands, in order to bring about what they view to be the best justice. That’s certainly the case for the title vigilante protagonist in the new crime drama, ‘El Chicano,’ which is being billed as the first Latino superhero movie, and Briarcliff Entertainment will distribute in theaters on Friday.

The project was helmed by first-time feature film director, Ben Hernandez Bray. The veteran stunt coordinator and actor, who has helmed episodes of such superhero television series as ‘Arrow,’ ‘DC’s Legends of Tomorrow’ and ‘Supergirl,’ also co-wrote the script for ‘El Chicano’ with Joe Carnahan. Bray drew on his some of his own personal experiences of loss in order to craft a gripping superhero crime movie that explores how emotional and physical pain can drive even the most upstanding citizens to chaise their own version of law and order.

‘El Chicano’ follows L.A.P.D. Detective Diego Hernandez (Raul Castillo) as he’s assigned a career-making case by Captain Gomez (George Lopez) to investigate a vicious cartel. During his probe, Diego uncovers links to his brother Pedro’s supposed suicide and a turf battle that’s about to overtake his neighborhood. Torn between playing by the book and seeking justice, the detective resurrects the masked street legend of El Chicano. As the title vigilante, Diego not only sets out to take down his childhood friend-turned-gang boss, Shotgun (David Castañeda), and defend his city, but also to avenge the death of his brother, who he believes was actually murdered.

Lopez, Castillo and actress Aimee Garcia generously took the time recently to talk about starring in ‘El Chicano’ during an exclusive phone interview. Among other things, the performers discussed that they were interested in starring in the drama, because it not only features the first Latino superhero, but it also includes strong protagonists who want to help their community. The cast also praised Bray’s work as a first-time feature director, as he was not only very clear on how he wanted the stunts to be carried out, but he was also emotionally driven to tell the story, in honor of the family members who he has personally lost.

The conversation began with the performers discussing why they were drawn to play their respective characters in ‘El Chicano.’ Castillo chimed in first, revealing that “Having the opportunity to play the first Latino superhero was something that was undeniably hard to turn down, in concept alone. But reading the script, and getting to know Ben Bray, the director and the visionary behind the story, led me to want to play this character. There’s no doubt that (Diego) wants to do right by his community, and that’s something that I connected with,” the actor admitted. “I knew Ben could carry out this vision, and he put a great cast together, and it’s been an incredible journey getting to work with them.”

Garcia, who plays Diego’s girlfriend, Vanessa, then disclosed that she “has never found a script that has 10, three-dimensional characters before this one. That’s especially important for me, as I’m a female who’s been in the (film) industry for awhile. So getting to read a female character who’s from East L.A., and is college educated and even has her teacher’s certificate, is amazing. I especially liked that she goes back to her hometown to teach the next generation of kids, and she doesn’t forget where she came from, as it shows her as a positive female role model for young Latinas.”

The actress also noted that “when I went to the movie theaters as a kid, I never saw myself represented on screen; I barely see myself represented in cinemas now!,” she exclaimed with a chuckle. “So I felt compelled to be a part of this story, which is so long overdue. The Latino community buys over 75 percent of movie tickets, but is only represented in three percent of the characters on screen. So I hope that this can be the first of many films to change that, and improve those numbers.”

Playing Captain Gomez appealed to Lopez in part because “Ben and Joe are from the action genre. That’s a good thing, especially for a director, because on a shoestring budget, it allows the filmmakers to make the project look bigger than it is,” the actor admitted.

“The rest of these guys in their fight sequences are totally believable. They’re some of the best guys in the genre, and are so good, you don’t even know who won.” The performer also appreciated “the adversarial relationship between us and the guys from the cartel, who should all be feared. So you understand the weight of what’s at stake. The performances are really good.”

Following up on the fact that Bray is a veteran stunt actor and coordinator, Castillo shared that he was also impressed with the action sequences that the director created for ‘El Chicano.’ The actor pointed out that “Like George was saying, this is an indie film that was shot on a shoestring budget, but it looks a lot costlier than it was. Ben was very clear on how he wanted the stunts to be carried out, and what he could pull off within our budget. He was able to tailor the budget to fit our needs.”

The director also “assembled an incredible stunt team of actors and coordinators. A lot of those guys had worked with Ben and Joe before on other projects. They were all calling in favors. Everyone came to work very enthusiastically, both in front of, and behind, the camera, and I think that steams from Ben’s passion, as well as his previous stunt work,” Castillo admitted. “The stunts on this film were exceptional, and were a lot of fun to do. They gave me a whole new sense of respect for action stars, and the physical labor that goes into making this type of film. There’s such joy in the work.”

Garcia also praised Bray’s work, noting that she has “a lot of respect for him. A lot of movies today are based on existing material, and comes from the studio down. But this movie went from the people up, and is completely original. This movie was created in part because Ben suffered from a family tragedy, as he lost his brother to gang violence,” the actress emotionally revealed. “He also lost his daughter, so he put his heart into the script, so that radiates throughout the entire story. This story happened because of family loss and a raw human experience. I think that’s what makes it different from any other superhero movie.”

The actress also pointed out that “This is also a time where communities are being separated, so this is a time that a superhero like this needed. People are deciding to take matters into their own hands, and pull together to protect their own.

“So I think Ben’s heart was leading this entire production. We started production on the anniversary of his mother’s birthday, so it was a labor of love,” Garcia shared.

“There were a lot of actors on the film who are award-winners and household names, and have been in this business for a long time. But everyone checked their egos at the door, and went right into work,” the performer also shared. “They said, ‘This is a movie that has never been done before; there has never been a Latino superhero. The last time there was a completely Latino cast, with fully fleshed out characters, was ‘Selena,’ and that was 22 years ago.” She added that making ‘El Chicano’ “was completely natural, and the audience will feel all of it.”

Castillo also expressed his appreciation that Bray allowed him to start working with Garcia early on during the production. “We had the chance to meet and get to know each other, and there was an instant familiarity from the beginning. It was valuable to be able to spend time together before we went up to Calgary and began filming,” the actor explained.

The actor added that he knew Marlene Forte played Diego’s mother, before production on ‘El Chicano’ began. “We’re both part of the LAByrinth Theater Company in New York City, so there’s real history in the family unit.

“As far as George goes, I’ve been watching his stand-up and show for a whole part of my life. We met on set, as we were about to start filming together, but I felt that I already knew him. I think I’m not the only one who feels that way, because there are a lot of people who know his work, not just in the Latino community. So it was really easy to look at George as Captain Gomez, and image the circumstances that our characters were in,” Castillo also shared. 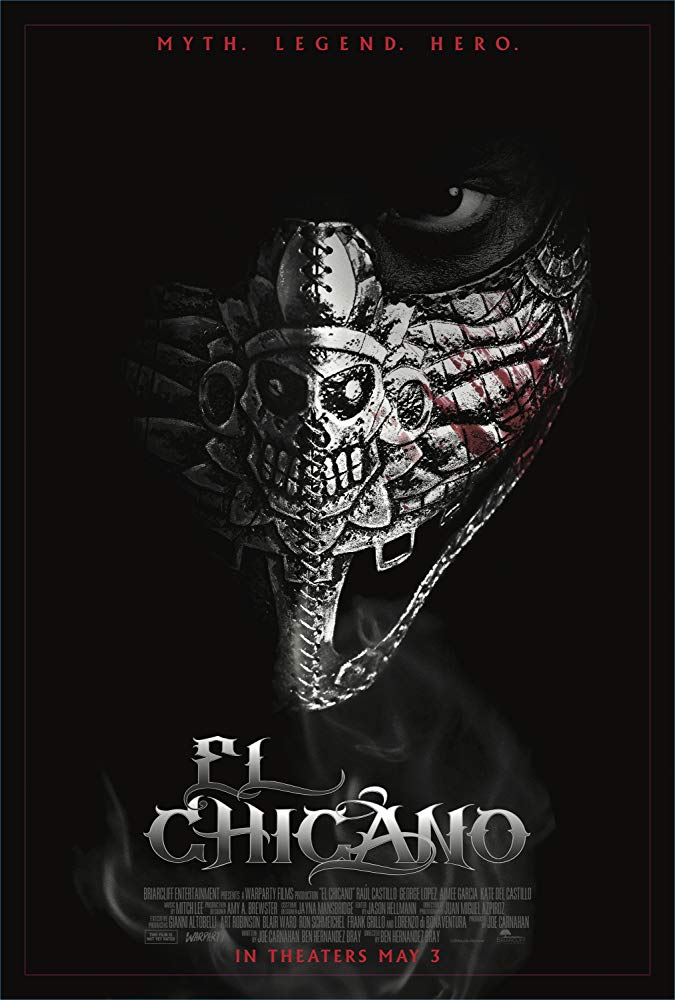