Relying on rituals that are typically perceived to be abnormal by society, as a way to create order in a life they feel increasingly powerless in, is an emotional experience for anyone who’s trying to regain control. That process can be even more rehabilitating for women who feel as though they can’t fulfill culture’s definitions of what a mother and wife should be, and become increasingly more desperate to maintain authority over whatever elements they can. That gripping journey is the powerful motivator for actress Haley Bennett‘s struggling protagonist in the new psychological thriller, ‘Swallow.’

Carlo Mirabella-Davis wrote, and made his narrative feature film directorial debut on, ‘Shawllow.’ He was inspired to pen the screenplay after hearing about the life of his grandmother, Edith Mirabella, a 1940s homemaker who was trapped in an unhappy marriage. She developed OCD rituals in order to maintain control over her existence. So he decided to examine the constraints of traditional gender roles in his script, which champions equality and feminism, as well as explores the stress and strain created by society’s expectations of what a woman should be, and how she should behave.

The drama had its World Premiere in the US Narrative Competition section at this spring’s Tribeca Film Festival. ‘Swallow’ was honored with five awards by the festival, including Best Narrative Feature, Best Screenplay for Mirabella-Davis, Best Actress for Bennett, Best Actor for Denis O’Hare and Best Cinematography for Katelin Arizmendi.

‘Swallow’ follows Hunter (Bennett), a newly pregnant woman whose idyllic existence takes an alarming turn when she develops a compulsion to eat dangerous objects. As her husband, Richie (Austin Stowell), and his mother, Katherine (Elizabeth Marvel), begin to notice the change in her and tighten their control over her life, Hunter is forced to confront the dark secret behind her uncontrollable obsession. She must also face provocative questions about the expectations imposed on women, their control over their own bodies and the psychologically damaging effects of patriarchal culture.

Mirabella-Davis generously took the time recently during Tribeca Film Festival to talk about writing and directing ‘Swallow’ during an exclusive interview at New York City’s Roxy Hotel. Among other things, the filmmaker discussed that he was drawn to cast Bennett as Hunter because the actress not only possesses the empathy needed to make the audience understand the protagonist’s pain, but also effectively explores the vast psychological movement that the character goes through. The New York-based writer-director also noted his happiness that the movie had its World Premiere at the Lower Manhattan-based festival.

The conversation began with Mirabella-Davis explaining how the thriller’s story was inspired by his grandmother, “who was a homemaker who developed excessive hand-washing, as a way to gain control over a life she felt she felt increasingly powerless in. So she was institutionalized by her husband. I’ve always felt that they were punishing her, in a way, for her sensitivity, and not living up to the expectations of what everyone felt a wife and mother should be,” he admitted.

“After I wrote the script, I met Mollye Asher, who was my dream producer, and I hoped to work with one day. She read the script, and incredibly said she’d do it. We then spent a long time revising the script, and brought on (fellow producer,) Mynette Louie,” the writer shared.

“Once we had the incredible producing team together, we embarked on casting, and miraculously found Haley Bennett. It was such a miracle to have her in this film,” Mirabella-Davis revealed. “We knew early on in the script that we needed somebody amazing to be Hunter. We also needed someone who had a lot of empathy, and could effectively explore the vast psychological movement that the character goes through.

“I knew Haley was an incredible actress, as I had seen her in a number of movies, and I hoped she would accept the part. We made an offer, and amazingly, she showed up to have a chat. We instantly bonded over the story,” the filmmaker also noted.

Finding the supporting cast was a long process for the drama. “Our amazing casting director, Allison Twardziak, had to find everyone who would augment (the character of Hunter) in this claustrophobic world,” Mirabella-Davis emphasized.

Once Bennett and the supporting actors were cast in ‘Swallow,’ the helmer worked with them on building their respective characters. The award-winning lead actress “was incredibly generous with her time. We spent a lot of time going over the script and discussing the character’s” origin. The duo also worked on what Mirabella-Davis described as the protagonist’s “quirks and rebellion, as well as her empowerment throughout the script. There were so many brilliant concepts and ideas that she brought to the character’s soul and heart. It evolved in a completely wonderful way once she came on board.”

The overall experience of making his feature film directorial debut was one that Mirabella-Davis cherished. But he called the process of moving from scribing the screenplay to helming the movie on the set was a strange one for him. He pointed out that while writing the script, he was “sequestered in my lair, and it was a solitary experience. But eventually you have to have other people join you to bring the story to life. It’s an emotional and inspirational experience to see other people take your story, and bring it to the screen,” he admitted.

“We had such a wonderful crew. Kate Arizmendi did an amazing job with the cinematography; she was so focuses, precise and brilliant. Erin Magill, our production designer, was also really inspiring,” the director shared. “It was very surreal to see other people bring the world you created in your mind to life.”

Following up on the production design that’s featured in ‘Shallow,’ Mirabella-Davis disclosed that the thriller was shot on location in Poughkeepsie, New York. “The discovery of the house, which is supposed to be a literal glass case that Hunter’s in, was fascinating. It overlooks the Hudson (River), and is so exposing. You think of a glass house as being integrated into nature, but when you’re actually inside of it, you feel vulnerable, because everyone can see you from the outside,” he pointed out. “There’s a horrific sense of dread when you’re in that place at night. You wonder who’s watching out in the woods. So I loved that feeling of fear and menace that location had.”

Also working with the award-winning cinematographer was another element of the filmmaking that the helmer cherished. “When Kate and I first met, she had this wonderful idea of master prime lenses to get this intense focus on the textures of things. We also wanted to film Hunter differently when she was in public and seen by other people than when she was by herself. So we came up with this camera scheme that when she was with other people, we mostly filmed her in medium shots, so that she would seem kind of isolated,” he explained. “But then in the moments when she lifted up one of the objects, we would film her very intimately in close-up shots. It was very exciting to feel that shift happen.”

The experience of ‘Swallow’ having its World Premiere at the 2019 Tribeca Film Festival was one that Mirabella-Davis described as being “wonderful. It’s been a dream come true. I’ve always loved the Tribeca Film Festival. I came here a few years back with (with his feature documentary directorial effort,) ‘The Swell Season,’ which was an incredible experience. So to be returning as a Tribeca alum was really moving to me,” he admitted. “I’m a New Yorker, so since we premiered here in my hometown, so many people from my life came out to the screening. I love New York audiences. This is also a real New York film; we shot it all here in Upstate New York, so I hope that resonates with viewers.” 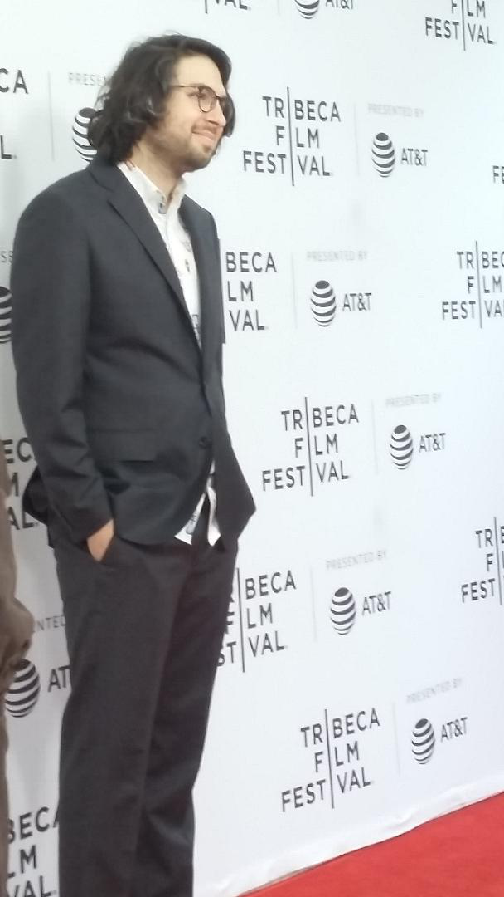