Humanity often stands united in awe of tranquil land that placidly allows its native creatures to thrive in their natural habitat. Unfortunately, those environments no longer serve as a serene and secure dwelling for the animals when people decide that the terrain is more beneficial to their own prosperity than the survival of the inhabitants. The new short film, ‘Sides of a Horn,’ showcases how the rhino is being massacred to the brink of extinction, due to humans’ greed.

Set in South Africa, the drama shows how people from the same communities, and sometimes even the same family, are killing each other, along with their iconic rhino, to supply a demand on the other side of the world. A demand for rhino horn in parts of Asia is fueling a poaching war across Africa. International crime syndicates are preying on desperate people living near protected areas, and offering them a fraction of the overseas profits to poach from their own wildlife. Meanwhile, anti-poaching rangers are putting their lives on the line to protect the animals.

‘Sides of a Horn’ is the first movie to tell the story of Africa’s poaching war from both perspectives, and is a prime example of using the power of film to create social change. The narrative short is based on actual events, and was shot in one of the communities most directly impacted by wildlife crime. The story follows the journey of two brothers-in-law who are fighting on opposite sides of Africa’s poaching war. The modern war is tearing communities apart, and is driving a prehistoric species to the verge of extinction.

The short film, written and directed by Toby Wosskow, from Executive Producer Sir Richard Branson, was an international co-production between US companies Broad River Productions, Whirlow Park Pictures and Frame 48, alongside South Africa’s The Televisionaries and YKMD Productions. ‘Sides of a Horn’ is being released worldwide today in 11 languages. The drama has been screening around the world for thought leaders, and many organizations are using it as a tool to advocate for change.

Wosskow generously took the time recently to talk about writing, directing and producing ‘Sides of a Horn’ during an exclusive interview over the phone. Among other things, the filmmaker discussed how he was driven to make a movie about the conflict between poachers and anti-poachers after he witnessed the conflict first-hand while he was traveling on vacation in South Africa several years ago. He also mentioned that he hopes the narrative’s story can create a real-world conversation that encourages viewers to take action, based on their beliefs.

The conversation began with Wosskow explaining what his inspiration in writing the script for ‘Sides of a Horn,’ and what the scribing process like while he was working on the development of the story. “In 2016, I was traveling in South Africa, and just being a tourist. I stumbled across the story first-hand. I met an anti-poaching ranger who, out in the bush, started telling us all about what was going on, and how close the rhino was to extinction. We talked for about three hours,” the writer shared.

“We then went into these communities that were next to the park. I learned first-hand how poachers and anti-poachers often come from the same communities, and sometimes even the same families,” Wosskow revealed. “So it’s not just about the rhino that’s on the brink of extinction; this is also tearing apart communities. It’s a human war that’s taking human lives, as well.”

From that point, the filmmaker’s vacation “turned into a research trip. I come from a documentary background, so I was going around and doing informal interviews with people. It wasn’t until I got back to the U.S. that I did a lot of research on the internet. I found out that there was a lot of media coverage about the international, multi-billionaire dollar, illegal wildlife trade, but no one was really talking about what I had just seen first-hand,” Wosskow divulged. “I saw these communities are being torn apart by these issues, so I started writing, and two years later, here we are,” he added.

In addition to appreciating the process of penning the screenplay for ‘Sides of a Horn,’ the filmmaker also cherished the opportunity of directing the drama. He admitted that helming the short “was hectic, because it’s a very ambitious film, and we weren’t working with a big budget. But at the same time, we did so much research, and had the perfect partners, who were local South Africans. So everything went relatively smoothly.”

Wosskow also revealed that the most difficult scene to shoot was the one with the rhino. “We spent almost an entire day out of our shooting schedule, just driving around, looking for the rhino. Mother Nature controlled it,” he said with a hint of a laugh.

“We then got hit with a torrential flood that affected the township and park. Most of the film is exteriors in a South African township and game reserve, so there were a lot of elements we couldn’t control. But finding the right partners, and doing the research ahead of time, really saved us,” the director added.

Further speaking of shooting ‘Sides of a Horn’ in the South African township and game reserve, as well as one of the main villages that’s prominent in the poaching landscape, the filmmaker shared what his experience shooting in the country was like. “We had two partners who really helped us. One was the anti-poaching unit in the park. There’s a royal family in the region where we filmed that governs the township and the larger region around it. They also became our partners. So both the anti-poaching unit and the royal family collaborated with us on the script, and helped us find the locations where we filmed the short,” he explained.

“So it was really about me, as the director, trying to find cinematic locations that helped tell the story. So we had an open dialogue with the people who lived there about where the characters would live,” Wosskow also shared.

The anti-poaching unit and the royal family also helped the helmer and his crew locally cast ‘Sides of a Horn,’ which stars Welile Nzuza, Sherldon Marema, Ayanda Seoka, Dimpho Mothloung and Mpho Noko. Wosskow further described what the casting process was like for the short. “A lot of the cast members in the film are community members who live in that township where we filmed…The four leads are actors from Johannesburg, which is two hours from where we shot.” South Africa’s biggest city and capital “is actually a filmmaking hub, so there’s an incredible talent pool there.”

The filmmaker held auditions for the drama, “and we saw a lot of great people. We selected our leads through that process. It was an interesting process, because there are a lot of different languages that are spoken in South Africa.” The primary language in the township where ‘Sides of a Horn’ was shot is Zulu, which is one of the 11 official languages of South Africa.

Since Wosskow doesn’t speak Zulu, “there was a lot of trust. Our script supervisor also served as our translator, so I had to put 100 percent trust in him that the actors were saying what they were supposed to be saying. I think that actually helped me focus on their performances,” he divulged.

“So the actors had to speak Zulu and enough English that I could communicate with them. Again, I was also relying on our script supervisor to tell me if they really could speak Zulu well enough.” The filmmaker added that after the actors were cast, “we did the rehearsals in English once, and then in Zulu.”

“I think as a director who also wrote the script, it would have been easy to get hung up on the dialogue. But so much of what the actors were saying came through their physicality and the visual aspect of their performance. So by not having to worry about the words, and focusing 100 percent on the actors’ physicality, was a great lesson for me to learn,” the scribe-helmer admitted.

In addition to penning and directing ‘Sides of a Horn,’ Wosskow also served as a producer. He then explained why he decide to also produce the movie, and how he balanced his helming and producing duties. “We raised the initial funds on Kickstarter over two years ago. We raised $57,000 from 235 generous people all over the world. It’s an ambitious short film, so bringing together all the elements took a lot of time and coordination,” he noted.

What really helped the producer in the long run was “finding the right partners in South Africa who could open doors for us, and get us access to all of the townships and game reserves. They also had to help us get the right local crew, and understand how the filmmaking process works in South Africa, because it’s a whole different experience to make a movie there.

“Fortunately, I was connected to a man named Emmanuel Castis, who’s an actor and a producer. He’s actually pretty well known in South Africa for some of his roles in sitcoms,” Wosskow revealed. “He’s extremely passionate about conservation. So as soon as he came on board, I found the missing link. Without him, I never could have flown to South Africa and made his ambitious of a movie. Finding him really brought everything together.

‘Sides of a Horn’ is being released worldwide today for free on YouTube, after it screened around the world for thought leaders and many organizations, which are using it as a tool to raise awareness and advocate for change. The helmer then explained why it’s important to him to have the short be seen by international audiences, and what he hopes they can take away from it.

“For a short film like this that doesn’t have the power of a studio or big marketing team behind it, I’ve put as much effort into this release strategy as I have into actually making the movie,” Wosskow admitted. “The decision was always about getting it translated into as many languages, and in as many places that it can have impact, as possible.

“We worked with three organizations, including Virgin Unite, which is a branch of the organization of our executive producer, Richard Branson,” the filmmaker shared. “We also teamed up with The African Wildlife Foundation, which has been doing a lot of work to distribute the film there.

“We also partnered with WildAid, which specializes in making PSAs about the illegal wildlife trade. It distributes the PSAs in Asia, where most of the demand for the most illegal wildlife products is, and uses content that’s targeted to the consumer’s mindset,” Wosskow also shared.

“We brought on a lot of partners and influencers who are helping us blast the short out to as many networks as possible. It’s about getting it in front of as many people as possible, and creating a conversation,” the director explained. “At the end of the short, we encourage viewers to take action at the film’s official website. Now that they’ve been educated about both sides of the issue, they can decide how they want to influence change, as we give them a lot of options on the website.” 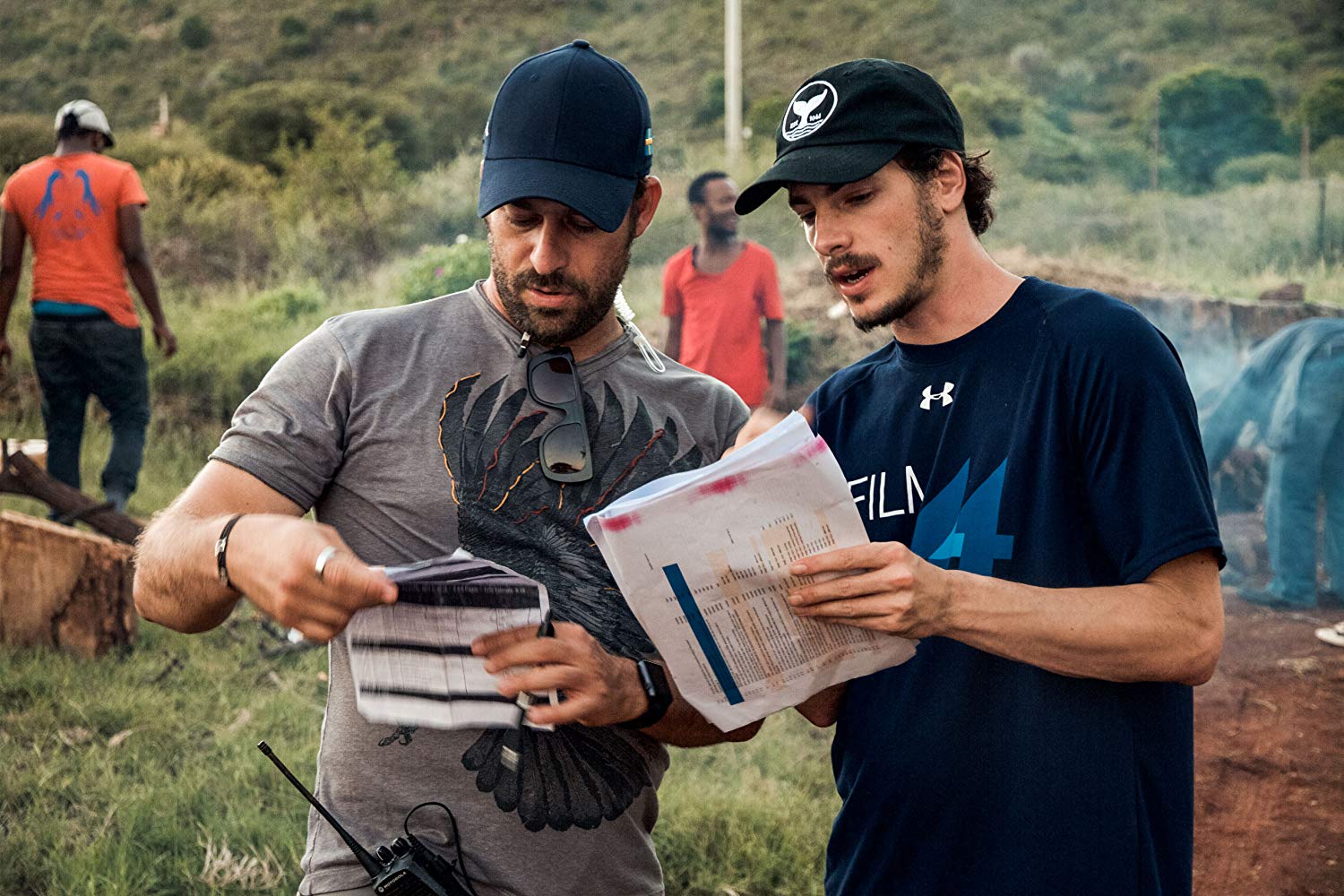