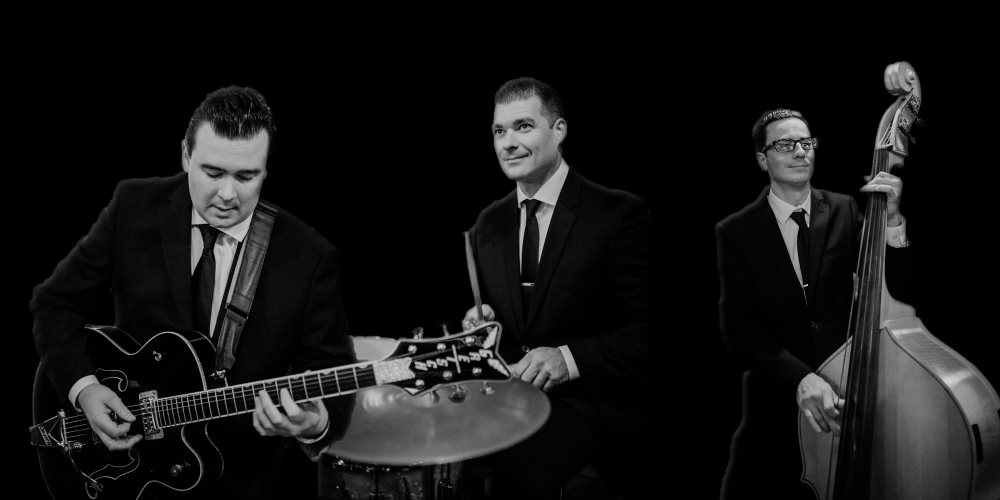 Embracing the rousing and enthusiastic rockabilly sensibilities of not just music, but life in general, is a powerful journey that not many people can completely immerse themselves in. But Will Cooley, Eric Lepene and Mike Volatile, the three members of the Rhode Island-based band, The TeleDynes, are doing just that with the release of their first all original album. The 10-track self-titled record is powerfully making waves as the musicians intriguingly mix the electric guitar, upright slap bass and drums, and heavily draw from such diverse genres as surf rock, blues, country and swing, to showcase how they’re contending with life’s struggles and triumphs.

The trio’s infectious energy are instantly shown in their innovative songs, which uniquely blend modern and classic styles of instrumentation and lyrics. They not only continuously infuse their live performances with new material to keep the shows fresh, but they also entertain their listeners with the innovative versions of the tracks that appear on ‘The TeleDynes’ album.

The TeleDynes’ eponymous record begins with the intriguingly energetic entry, ‘Crazy Train,’ which is driven by an intense swing electric guitar and rocking horn section. Cooley, who serves as the singer, powerfully croons about how he’s never thought about leaving his relationship before, but he’s now changing his mind. While the smile of the woman he loved keeps hypnotizing him to stay, he ultimately sees that she brings him down. He also admits that he hopes that what he refers to as her title crazy train leaves before she drags him back into her dilemmas, he realizes that things aren’t the same between them, no matter what she says. While he admits that someday she may be cured, he can’t live this way anymore, as he reflects on what he’s learned from their relationship.

The stylized, infectious energy that enthralling drives ‘Crazy Train’ continues onto the album’s sophomore track, ‘Callin’ On the Devil,’ which also features a stunning horn section. While the rock-swing song is more fast-paced than its predecessor, it maintains the same interesting notion of wanting be set free, even if it means having to rely on the devil for help. The tune perfectly blends classic charm with a spellbinding, contemporary jazz-infused melody, which will surely leave listeners rocking with the rousing rhythm.

Another notable entry on The TeleDynes’ self-titled album is its sixth song, ‘Ain’t Going Back,’ which thrives on its surf guitar-driven grooves and raspy, rockabilly rhythms. The uncompromisingly rough-and-tumble song features an immersive country-swing vibe as Cooley proclaims that he wants to set his life straight, as he has been living a lie. Much like the record’s opening track, the singer once again notes that he doesn’t want to pulled back in into the relationship, as the woman he was with says all his love has come and gone. Driven by an enthralling horn and guitar blended solo half-way through the track, the vocalist also admits that he’s afraid can’t make amends, but he also seems carefree and relieved to not have to fix the broken bond in the relationship.

The album begins to wind down with its instrumental penultimate track, ‘September.’ The tune effortlessly blends surf rock and Latin flavors into its roaring melody, which is driven by thriving blend of surf rock drums, horns and guitars. The harmonic vibe supports the exhilarating atmosphere that listeners will sure to find uplifting.

The TeleDynes’ eponymous record ends with the classic rock tune, ‘Rockabilly Bug,’ which completely embraces the band members’ musical experiences and lifestyle. Aided by a swing guitar that allows the album to end on a high note, the energetic throwback to the 1960’s-signature sound of blues and rock features the same style as the album’s opening two entries. Also fueled by pop harmonies and dynamic rockabilly tempos, listeners will surely appreciate the subtle intricacy of the instrumentation and vocals.

The TeleDynes deliver a swinging rockabilly sound with their monumental self-titled album. The enthralling set of songs is a noteworthy, fast-paced journey through a wide variety of genres, including classic rock, blues, country, swing and jazz, as Cooley and his bandmates refuse to hold anything back. With vocals and instrumentation that thrive on their sophisticated sense of urgency and remarkable infectious energy, the trio unabashedly showcase how they’re contending with life’s struggles and triumphs.