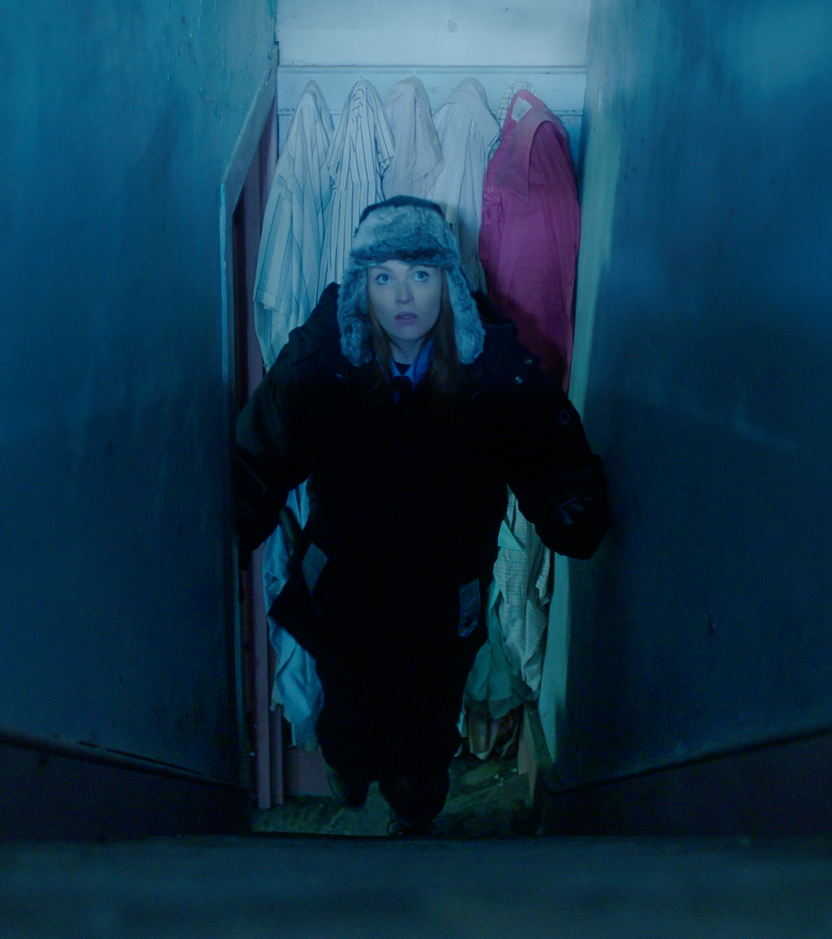 Writer-actress-producer Liv Collins stars in the horror film, ‘Deadsight,’ which was directed by Jesse Thomas Cook.

The enigma that surrounds people’s personalities and actions, as well as the circumstances of a mystifying situation that plagues an entire society, can be equally terrifying and motivational. Having to rely on a complete strange to help navigate the horrifying new situation that their culture is contending with can be completely frightening, but that’s what the two protagonists must do in the new horror movie, ‘Deadsight.’ In the drama, the two strangers, who are facing their own physical limitations, must learn to completely trust each other, as their community wakes up to discover that many of their fellow citizens have been turned into zombies overnight.

‘Deadsight’ is now available on VOD, Digital HD and DVD, courtesy of RLJE Films. The movie was directed and produced by Jesse Thomas Cook. The drama was co-written by the helmer’s wife, Liv Collins, who also served as a producer, and Kevin Revie.

‘Deadsight’ follows Mara Madigan (Collins), a pregnant police officer about to go on maternity leave. But on her last day on the job, she wakes up to a world ravaged by a nightmarish and bloody plague of the living dead. Amidst the chaos and violence, she finds Ben Neilson (Adam Seybold), a man who is virtually blind and helpless, and has a mystery shrouding his past. Somehow these two must put their heads together and find a way to safety to escape this living hell.

Collins generously took the time recently to talk about co-writing, starring in and producing ‘Deadsight’ during an exclusive phone interview. Among other things, the actress-filmmaker discussed that after she finished working on the script, and she began helping Cook look for the locations where the the horror movie could be shot, they ultimately decided that since she knew the role of Mara so well, she should play the female protagonist. The performer-producer also mentioned that she cherished not only working with her husband as the director on the drama, but also Seybold as her co-star, and Revie as her co-writer, as the experience of working on an independent feature like this one brought them closer together.

ShockYa (SY): You wrote the script for the new horror movie, ‘Deadsight,’ with Kevin Revie. What was the process like of putting the feature together while you were working on the development of the story with Kevin?

Liv Collins (LC): It was a lot of fun. I was very excited to make a zombie film. I really came into it as a producer and writer. As the process went on, I dabbled with the idea of actually playing the character of Mara. I truly was seven months pregnant at the time, so we had to make the character pregnant. That added a bit of vulnerability to the character.

LC: My husband, Jesse, who directed the film, as well as my co-writer, Kevin, and I were actually location scouting together. When were out looking for the factory where we were going to film, after we had written the script, I was saying that I loved the character, and would be interested in playing her. So we all thought, what if I did really play Mara? So we had to add in the whole pregnancy aspect after the script had already been written. We had to make a lot of adjustments to adopt to that character change. It was challenging, but also a lot of fun.

SY: ‘Deadsight’ was directed by Jesse, like you also just mentioned. What was your experience collaborating with him on the drama?

LC: It was very collaborative. It’s interesting; because we’re married and have three kids, we’re very busy. Working on a film is also so intense, because you have to organize everything. But overall, it was great and natural. We fed off each other, and had different ideas. Also, while I was working with Adam as my co-star, we were able to adopt when we performed.

SY: Adam Seybold plays Ben in the film, who you also just mentioned. Did you have rehearsal time with him, in order to build your characters’ relationships?

LC: I had just filmed another movie (‘Creep Nation’) with Adam, in which we starred as siblings, about seven months before we worked together on ‘Deadsight.’ Jesse was the one who wanted to bring Adam on, which was great. He’s a really great guy to work with, and we’re friends, on-and-off set. It’s fun when you have another writer on board, like Adam is, because they’re very helpful and creative.

The original script for this movie was actually a lot longer than it ended up being. We wanted to make the film like a video game, so there wasn’t a lot of time for big dialogue scenes. We’d scratch out the dialogue, and change things around before we even got to the set, which gave us freedom. As the movie was going on, it was very liberating to shoot that way. So it was great that he was also a writer, because he could help with the logistical things.

SY: ‘Deadsight’ was shot in Collingwood and Owen Sound, Ontario. What was your experience shooting in Canada?

LC: It was very cool. A friend of ours owns this property in Collingwood, which is where we live. So we built the story around the fact that we knew we had those locations. We knew we had these abandoned homes, so we could break a window, and make it look like the characters were in the midst of this zombie apocalypse. We also bought the trailer, after which the art department marked it up, and made the junk look grosser.

It was also cold, so I was lucky that the police coat I wore was warm. The houses, in particular, were cold and damp, so the scene where we were in the basement was hard. It also really stunk down there, because we found a dead bird in one of the back rooms, so that was pretty creepy. Overall, it was pretty creepy.

SY: What was the process like of creating your physicality and the stunts for the feature?

LC: Since I truly was pregnant, and we finished filming about a week before Christmas, I was very present. I couldn’t do anything that physical at all. But we actually had a mishap on the set, so we lost some footage. When Jesse was later editing the film, he realized that we lost the footage from one of our days shooting.

So we had to go back and do pick-ups in April, and I had already had the baby. So we took advantage of having these extra shooting days when I wasn’t truly pregnant anymore, but I ended up having to put a prosthetic belly on. We decided that I could do a scene where I fight a zombie in the cemetery when I’m not really pregnant, as we could then really rough and tumble. The zombie was played by our good friend, Justin Darmanin, who’s a stunt person. We had to wrestle in the cemetery, and we had a lot of fun.

So it was a blessing in disguise that we lost the static card that had the original footage, and had to go back after I had the baby. It gave us some time to have fun with the Mara character, and be a little more physical.

SY: What was the process like of working with the make-up department to create the look for the zombies?

LC: We really left that process up to our special effects make-up artists. We had this backstory that the outbreak was a mutation of the flu virus. It’s this brutal illness, and the zombies are rotting and ill. So the artists did a great job; we gave them the freedom to design how they wanted the zombies to look.

My two brothers actually play two of the zombies in the film. They’re really disgusting in real life, so that picks up on screen!

SY: In addition to writing, co-writing and starring in ‘Deadsight,’ you also served as a producer. Why did you decide to also produce the movie, and how did you balance writing, acting and producing the drama?

LC: It was intense to also produce the film, as it consumed our whole lives, especially since Jesse and I are married. So the film became our entire world. We basically fell right into film mode, and we were in our own little world. We had to get all the logistics figured out, including the wardrobe. It was all go, go, go. For a few months, we were infatuated with the world we created for the movie.

We finished filming about a week before Christmas, and then I had to run out and get all the things we needed for the kids. So we were just exhausted. We had given everything we could to the film and the holidays, so it was very exhausting, but so much fun.

SY: ‘Deadsight’ had its World Premiere at last year’s edition of the Blood In The Snow Canadian Film Festival. What was your experience bringing the feature to the festival?

LC: I was so excited that we got into Blood In The Snow. It’s such a good festival, and they’re so supportive. This film felt like it came out of nowhere; we weren’t really sure where we were going with it, and it was ever-evolving, so we’re really proud of it. So when we got into Blood In The Snow, we were so pumped for everyone to see it. There really was no expectation for it, because it’s a zombie film. So it was nice that we were recognized by them, because we put so much work into the film, and people can be so quick to dismiss it. We filmed locally, so to have the premiere in Toronto, and have all our cast and crew go, was really nice.

SY: The drama is (now available) on DVD, On Demand and Digital HD. Why do you think having the disc and digital distribution is beneficial for an independent film like this one?

LC: We’re really excited to have the DVD and VOD releases. A lot of people have seen the trailer, which is really intense. So they’ve been asking when and how they can see the film, because they’re so excited about it. So I’m pumped for people to see the entire film!