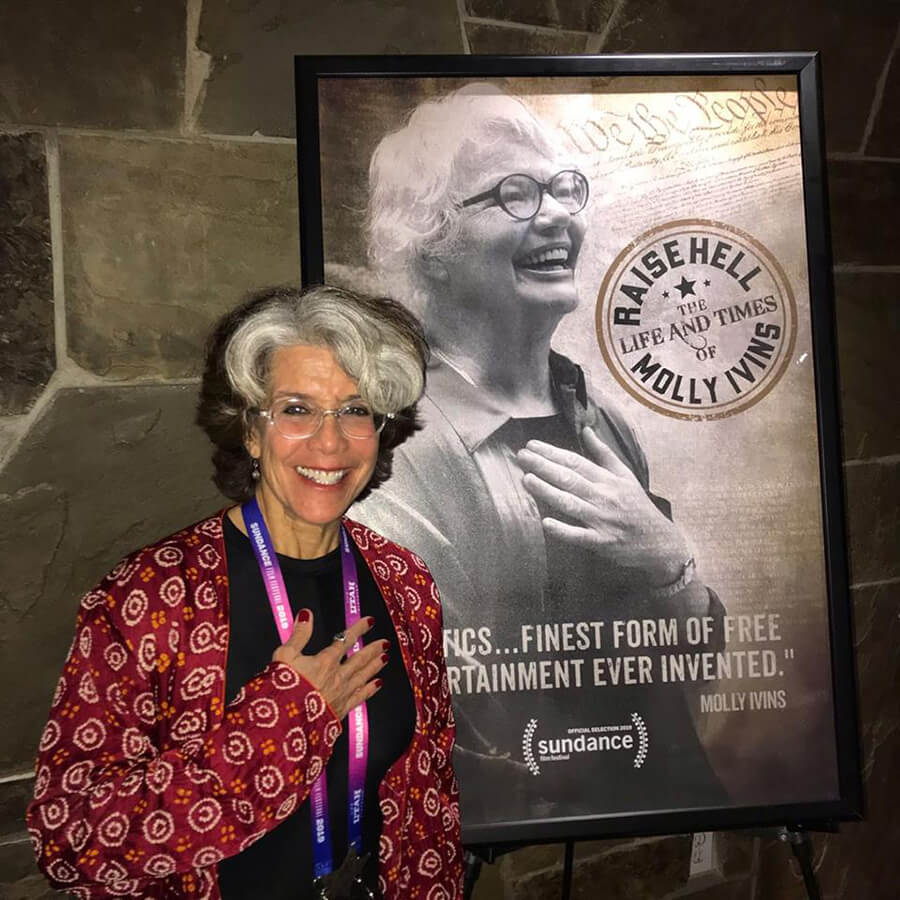 Janice Engel, the co-writer-director-producer of the documentary, ‘Raise Hell.’

The most successful political commentators are often those whose personalities and opinions are larger than life. The late Molly Ivins was one such legendary columnist-humorist who was just as bold and towering as her home state of Texas, as she often offered her fearless observations and critiques on such decisive topics as government and religion. Her storied life and career are highlighted in the new movie, ‘Raise Hell: The Life & Times of Molly Ivins,’ which was co-written, directed and produced by versatile filmmaker and television executive, Janice Engel.

The documentary screened during the Festival Favorites section at this spring’s SXSW in Austin. At the end of the festival, the movie was honored with the Audience Award in its screening category. The feature is set to receive its official release when its distributed in theaters on September 6.

‘Raise Hell’ tells the story of Ivins, the political columnist and Texas maverick who spoke the truth to those in power, and gave a voice to those who had none. As the first woman to co-edit The Texas Observer, she fearlessly took on her male colleagues. At the height of her popularity, 400 newspapers carried her column. She railed against Big Bidness in government, and supported the Texification of U.S. politics, which included anti-intellectualism and public religiosity. With her death in 2007, the nation lost a freedom fighter who charged citizens to continue to raise hell.

Engel generously took the time during SXSW to sit down for an exclusive interview at the Intercontinental Hotel in Texas’ capital city to talk about directing and producing ‘Raise Hell.’ Among other things, the filmmaker discussed that she was drawn to make the documentary after seeing the play, ‘Red Hot Patriot: The Kick-Ass Wit of Molly Ivins,’ and doing research about the political commentator, and seeing the lasting impact impact she had on her audience. Engel also expressed her gratification that the movie screened in the author’s home state of Texas during SXSW, in part because it was a cathartic reunion for the people who knew her.

The conversation began with the filmmaker explaining why she was interested in making a documentary about the Texas newspaper columnist. “Well, all you have to do is Google Molly Ivins, and watch a C-SPAN clip about her, and you’ll understand why she’s so intriguing,” Engel noted.

“I also went to see a one-woman show called ‘Red Hot Patriot: The Kick-Ass Wit of Molly Ivins,’ on the recommendation of my good friend James Egan, who wanted to make a film with me. He said, ‘You need to go see this play, but I’m not going to tell you why,’ so I went. The material just knocked me out, especially about who she was, as well as her wit. She was so funny!,” the director exclaimed.

“So when I got home, I Googled Molly Ivins, and I was up until about 2 or 3 in the morning, watching C-SPAN clips, and reading about her,” Engel shared. “I then called James back the next day and said she’s amazing. He said that a film hadn’t been made about her. So since we were interested in making a film together, he asked if I was interested in making a documentary about Molly. I said yes, so we started working on it.”

So Engel and Egan reached out to Ivins’ chief-of-staff, Betsy Moon, “and she looked us on IMDb and saw that we make films. So she put us in touch with Molly’s estate, as well as the Texas Observer and the ACLU, and in a couple of weeks, gave us the greenlight,” the filmmaker shared.

“We knew that we also needed a Texan, because we’re two carpetbaggers from the East. So we called our friend Carlisle Vandervoort, and James gave her 48 hours to decide if she wanted to work as a producer with us. She then called us the next morning and said, ‘I’m in.’ What’s funny is that Carlisle grew up in the same (Houston) neighborhood of River Oaks as Molly,” Engel revealed. “They went to the same private school, and Carlisle was also a LGBTQ activist, two decades after Molly. Carlisle also grew up reading Molly’s columns, so it wasn’t a big stretch that she decided to help us produce the documentary.”

Six weeks after Vandervoort decided to help produce ‘Raise Hell,’ Engel “was on a plane to Texas. Carlisle and I then held our first six interviews, and held our first fundraiser at the Church of Hightower, in Jim Hightower’s office. We raised $17,000!,” she excitedly recalled.

Once the helmer received “the greenlight and we were in, Molly’s people opened their doors” to interviews for the movie. “As I would talk to people and did research, I would ask, ‘Who else should I talk to?’ They were all welcoming, and so thrilled that somebody wanted to do something on Molly, because she’s so beloved.”

A lot of the process that goes into making a documentary is intuitive, Engel also admitted. “I’ll read something and instinctually think, I have to talk to that person, and I would talk to them,” she divulged. “But there were also some people who I couldn’t talk to; we wanted to have a couple of presidents in this, and I even took a photo op with one of them-Bill Clinton. When I met him and he heard I was making this film, he put his arm around me and huddled around me, and we talked about Molly for about five minutes. I then ran into him again a few months later at something else, and I thought, he’s going to do this. But it ultimately didn’t work out.”

The filmmaker then revealed that she knew while making ‘Raise Hell’ that she didn’t want to just make a talking head documentary. But she admitted that “The budget fuels the cinematography, and what and how you can shoot. Vur overall, you can always get a good look, even if you don’t have an expensive camera. It’s all about lighting, and how you make up your set,” she explained.

“I generally went for Canon cameras, because they create a naturalistic look, as opposed to a more HD look. We also used natural, organic lighting. Kristy Tully, who’s my fabulous lead cinematographer, knew what I wanted. We shot a lot of B-roll together, and really cemented the look of the film. Dave Eberts also worked with me as the cinematographer for the first 10 days of the trip back in 2013, and we started that look,” Engel also shared.

The director revealed that she also “wanted to film all of Molly’s friends and colleagues in a very natural and warm way, and I did that by filming them in their homes. I also filmed journalists and pop politicians in places where they felt comfortable, but not necessarily their homes.”

After Engel and her crew completed filming the interviews, which was a six-and-a-half year process, she began editing the documentary, which was also an instinctive experience for the filmmaker. After putting so much effort into the feature, “I really knew Molly and her life, and I had the people I wanted to include in the final edit. I go by the idea that your first thought is the best thought, so I came up with a structure for the film during my first year of projection. I eventually did become frightened by the process, because there was so much material. I then brought in my creative consultant, Maryedith Burrell, and we worked to figure the structure out,” she divulged.

“We were initially chasing what we thought would get us money. Our consulting editor, Kate Amend, then asked, ‘What’s wrong with a biopic?’ I thought about it and said, ‘Nothing,'” the helmer further shared. “So I wrote down what I wanted the structure to be, and it was the same as the structure that I originally came up with when we first started working on the movie. That’s the basic move you see today.”

In addition to directing ‘Raise Hell,’ Engel also thrived on the experience of also serving as a producer. She has served as a showrunner on several television shows, as well as a “creative producer and boots-on-the-ground, logistic producer…That comes very naturally to me.”

After the editing process was complete, the experience of bringing the finished project to SXSW was one that the director-producer described as being “amazing. There’s nothing greater than being able to bring Molly home to her hometown and people…I get to share everything that I discovered with everyone in her home state…The premiere here was a homecoming for her. A lot of people who were in the audience here were her friends, family and colleagues, and some of them hadn’t seen each other since her memorial in 2007. It was a cathartic reunion, and I was blown away by the experience.”