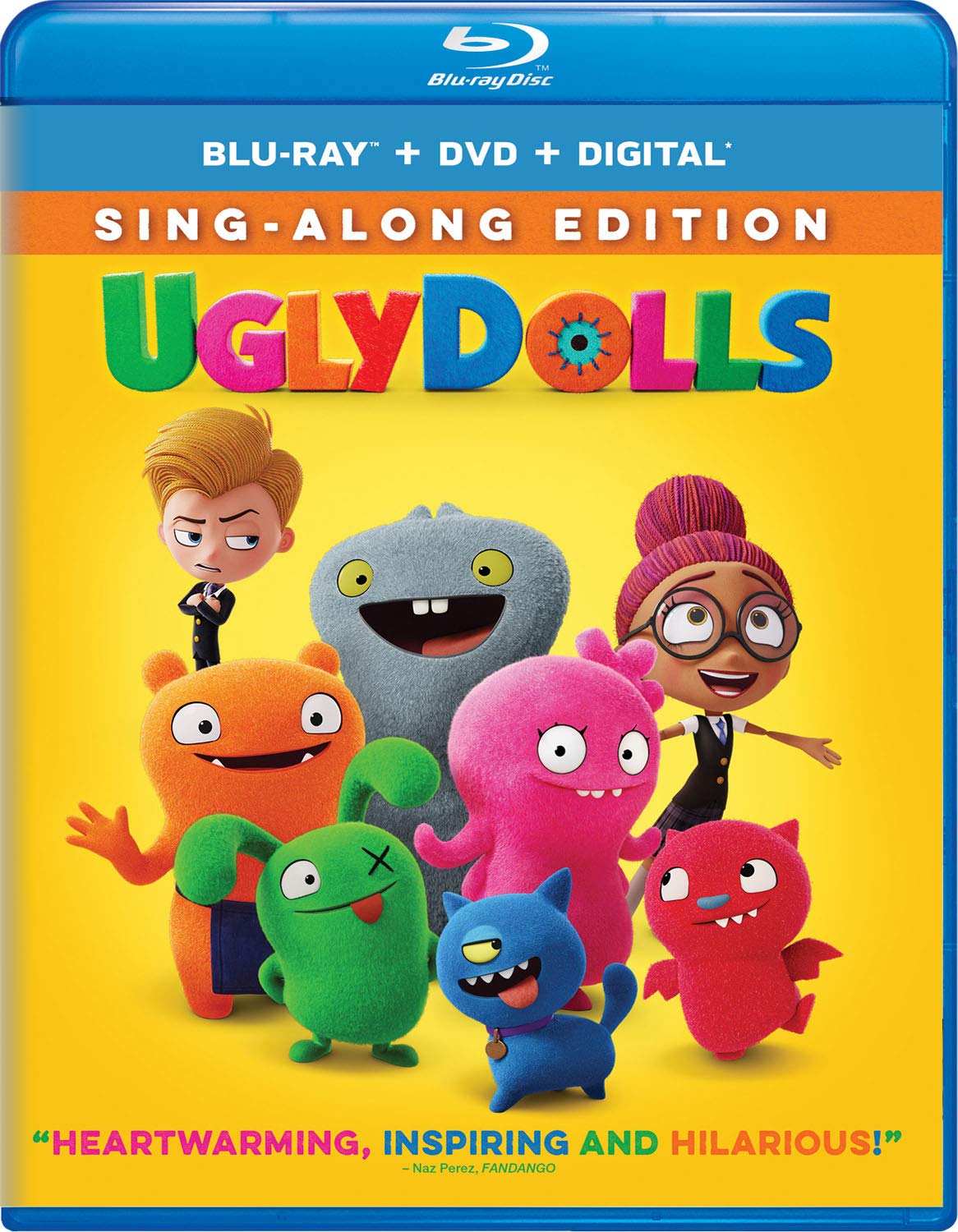 The Blu-ray cover for STXfilms and Universal Pictures Home Entertainment’s animated adventure comedy, ‘UglyDolls,’ which was directed by Kelly Asbury.

Unconventionality rules in Uglyville, a remote town where dolls who aren’t considered to be perfect by kids confront what it means to be different. The title dolls in this spring’s animated comedy, ‘UglyDolls,’ are ultimately proving to the children who discarded them that no one has to be perfect to be amazing.

‘UglyDolls’ is now available on Blu-ray, DVD and Digital, courtesy of STXfilms and Universal Pictures Home Entertainment. The family adventure movie’s sing-along home release edition includes the following bonus content: Sing Along Tease, which offers a small taste of the big fun the sing-along edition provides; Fun with the Cast of ‘UglyDolls,’ which allows viewers to watch the cast of the comedy play fun games that showcase their unique talents; Making ‘UglyDolls,’ which offers a closer look at the music behind the film and the talented voice cast that brings the rich characters to life; and theatrical trailers.

Based on the UglyDoll characters that were created by David Horvath and Sun-Min Kim, and written by Allison Peck, ‘UglyDolls’ is set in Uglyville, where weird is celebrated, strange is special and beauty is embraced as more than simply meets the eye. When Moxy (Kelly Clarkson) and the UglyDolls discover Perfection, a town where dolls are seen through a strict model of attractiveness, they confront what it means to be different, struggle with their desire to be loved and ultimately discover that they don’t have to be perfect to be amazing.

‘UglyDolls’ was directed by Kelly Asbury, who has previously worked on such animated movies as ‘Shrek 2,’ ‘Smurfs: The Lost Village’ and ‘Gnomeo & Juliet.’ His latest animated comedy features original songs that are performed by Clarkson, as well as several of its other voice stars, including Nick Jonas, Janelle Monáe, Blake Shelton and Pitbull. The film’s voice cast also includes Wanda Sykes, Gabriel Iglesias, Bebe Rexha, Charli XCX and Lizzo.

Asbury generously took the time recently to talk about directing ‘UglyDolls’ during an exclusive phone interview. Among other things, the filmmaker discussed how he encouraged the actors to allow their true personalities to shine through in the voice portrayals of their characters, which the animators incorporated into the characters’ movements. The helmer also noted that he values the story’s message that everyone should learn to be more kind to, and accepting of, each other, which shines through in the movie’s music.

Kelly Asbury (KA): Well, when I signed on to direct the film, Pitbull was already attached. He started the wave of the actors signing on to star in the film. He’s a very entertaining character, and he helped set the tone of things. He was very enthusiastic to play Uglydog.

Kelly Clarkson was our next performer to sign on. She was just perfect for the voice of Moxy. When she read the script and saw her lines, she actually asked if we wrote it specifically for, and about, her. It was actually just a coincidence that the role was something that she could perfectly fit right into.

Once Kelly signed on, there was a lot of enthusiasm from the other performers to be a part of the film. We were able to get some great talent, like Nick Jonas and Janelle Monáe. It was just so much fun, and they all did great work. It was a fantastic opportunity to meet, and work with, these people, who I have admired for so long.

SY: Once the actors were cast, what was the process like of collaborating with them on creating the voices for their roles?

KA: Well, we had extensive meetings and phone calls with the cast. We showed the actors the animatics (animated storyboards). We really prepped the actors as much as we could.

I asked them all to really be themselves, as I didn’t want cartoon voices. I wanted Nick to go in and be this character of Lou, but I also wanted him to play it as naturally as he could. The same was true for Janelle Monáe and all the actors.

I wanted their true selves to be a part of their characters, and we were able to tailor some parts of the characters to the actors’ personalities. As they started doing the voice work, we also captured their movements, and based some of the animation on what they were bringing to their parts.

SY: Speaking of the characters’ movements, did you base their animation entirely on the actors’ physicality while they were recording their voice roles? What was the process of creating how the dolls would move in the movie?

But what happens a lot of times in animation is that the animators will use cues that they see from the actors, such as a way they’ll move their faces, or how they enunciate words and speak, and how their mouths are shaped. Those things actually put a lot of reality into the characters. Then viewers can recognize the things that the actors do; they’ll think, oh, Kelly Clarkson does that with her face, and that smirk is very Nick Jonas. The animators do that a lot, so that’s why a lot of times with animated features, you feel like the characters have aspects of the actors who voice them.

SY: In addition to directing animated movies, you have also worked in the art and animation departments, and served in many creative capacities, for several films, including Disney’s ‘Frozen,’ ‘Wreck-It Ralph,’ ‘Toy Story‘ and ‘Beauty and The Beast.’ How did your background in animation influence the look you created for ‘UglyDolls?’

KA: Every movie you work on teaches you something, and you hope to bring it with you to the next one. At the same time, every single movie has a different personality, and a different set of challenges. So there are always lessons learned, and things to carry over, from each film.

I studied to be an animator, but was never fully an animator; I’ve only done assistant animation work. I animated back in school, so I understand the principals of animation, and what I want to see with the characters.

Fortunately, the animators at Reel FX in Montreal who I worked with on ‘UglyDolls’ are so gifted that I could step back. Just like with the actors, I tried to stay out of their way. I like to let people do their job, especially if they can do it better than I can.

So a lot of times, I was happy with the animation very early on, because these people were very dependable. Each person was able to really concentrate on the key aspects of a certain character, and they were often able to confer with each other. We would then meet and talk about the things that Moxy and the other characters do. I’ve always been lucky to have teams who are very gifted animation artists, so my job of directing them is easy.

SY: The Blu-ray, DVD and Digital of the music-filled comedy features an exclusive, all-new sing-along edition. What was the process like of working with the movie’s composer, Christopher Lennertz, to create the score for the feature, as well as the bonus content for the home release?

KA: I love musicals, and I think music is perfect for the animation medium. It was actually my idea to make the film a musical, because it simplified things a bit, over having a lot of scenes of dialogue. Animated characters are easily able to sing about their lives, and those songs help the viewers not only learn about the rules of the character, but also the rules of the world they’re living in.

It would be much less entertaining if they were talking, instead of singing, about those rules. I believe audiences will listen to a character sing about something more than they would listen to them talk about the same thing…Animated characters are meant to be viewed visually, so a lot of dialogue is not something they need. So the songs, and letting the characters sing about how they’re feeling, are a key role in helping us move the story forward.

I think Chris Lennertz and Glenn Slater, who also wrote the songs, were brilliant at this. I think the songs they wrote serve the move very well…I was very happy with what they did, and I hope to work with them again. They were great collaborators, and they helped write the story.

SY: ‘UglyDolls’ is filled with powerful messages of inclusion and empowerment. As a filmmaker, why did you feel it was important to showcase that the free-spirited title dolls confront what it means to be different, struggle with a desire to be loved and ultimately discover who you truly are is what matters most?

KA: The overall message of the film, for me, was that we should all learn to be more kind to, and accepting of, each other, and everyone’s equal. I think those are hugely important messages, especially in today’s world…This was a solid, easy message to put forward in this story, and I think we did that very well.

I also think the movie is about acceptance and kindness. Messages like that are universal. Having kids learn it in an indirect way like animation is great, and it lets them know that just because we don’t all look alike, doesn’t mean that anyone is better than anyone else. So that’s a message that will continue to be valuable.