Unleashing civil unrest across America’s largest cities was one of the major activities that teens immersed themselves in during the late 1960s. But fighting for their lives is taking on a whole new meaning for the adolescents in the new horror film, ‘Scary Stories to Tell in the Dark.’ The anticipated mystery drama, which is based on the beloved 1980s short story collection by Alvin Schwartz, highlights how the kids in the small town of Mill Valley are fighting back a terrifying destiny that has already been written for them.

‘Scary Stories to Tell in the Dark’ was helmed by ‘The Autopsy of Jane Doe‘ director, André Øvredal. The script was written by Dan Hageman & Kevin Hageman. The screenplay was based on a screen story by Guillermo del Toro, who also produced the movie, as well as ‘The Collector‘ series scribes, Patrick Melton and Marcus Dunstan. The thriller stars Zoe Colletti, Michael Garza, Gabriel Rush, Austin Abrams, Dean Norris, Gil Bellows, Lorraine Toussaint, Austin Zajur, Natalie Ganzhorn and Kathleen Pollard. CBS Films and Lionsgate will release the drama in theaters this Friday, August 9.

‘Scary Stories to Tell in the Dark’ is set in l968 in America. Change is blowing in the wind…but seemingly far removed from the unrest in the cities is the small town of Mill Valley, where for generations, the shadow of the Bellows family has loomed large. It is in their mansion on the edge of town that Sarah (Pollard), a young girl with horrible secrets, turned her tortured life into a series of scary stories, which are written in a book that has transcended time. The stories ultimately become all too real for a group of teenagers who discover Sarah’s terrifying home.

Øvredal and del Toro generously took the time to participate in a special presentation at New York City’s Roxy Hotel early this summer to premiere the above official trailer. The duo also took the time to answer questions from the press in the audience during the event.

The conversation began with del Toro explaining his own obsession with the world that Schwartz infused into the short story series. “When I first saw the cover of ‘Scary Stories Vol. 1,’ it was astounding. I found the (stories and illustrations) so chilling. They had the powerful simplicity of a story told at a campfire,” the producer shared. He added that he and Øvredal were determined to incorporate the illustrations that Stephen Gammell created for the short story collections into the film adaptation.

Del Toro added that he and his fellow filmmakers “tried to re-create the exact drawings that Stephen did, three-dimensionally. We went to huge lengths. We did it like an animation, sculpted it, dressed it. We didn’t do a (CGI) approach. That counts for a lot.”

Re-creating Schwartz’s ‘The Dream’ story was the movie’s most significant achievement, the producer also divulged. The tale focuses on “a pale woman, who was so haunting and difficult to make. She’s a very ethereal, doughy pale woman with a beatific little smile. She’s almost cute, but she’s also the scariest thing you’ve ever seen.”

Turning Schwartz’s anthology stories into a single, cohesive narrative was also something that del Toro and Øvredal both felt was essential for the film adaptation. The producer noted that he loves anthologies, “but they’re always as bad as the worst story.” So the filmmakers wanted to instead focus on how storytelling “changes who and what you are. It’s a YA movie about childhood around a time when things were changing forever. It was the end of childhood in many ways, and a crucial time for America.”

While the thriller was inspired in part by the work of Stephen King, especially movies like ‘Stand by Me’ and the miniseries ‘The Stand,’ del Toro also noted that ‘Scary Stories to Tell in the Dark’ is unique, because the lead character in the new horror film is a girl-Colletti’s Stella. “Normally in these stories, it’s a bunch of boys with a sidekick that’s a girl. I wanted to flip that and make her the lead,” revealed the producer.

The story contributor added that the drama, which is rated PG-13, is also different from other entries in the horror genre because the chaos is presented in a family-friendly way. “We wanted to make a family adventure. I want this to be a nice family horror film. Family is horror in itself, but sometimes, with milk and cookies, you can find something nice to watch,” he explained.

Del Toro also shared that he chose Øvredal to direct the upcoming movie in part because he enjoyed the helmer’s 2010 Norwegian fantasy horror film, ‘Trollhunter.’ The director added that he was drawn to helm the new thriller because he feels it’s “fun urban horror tale that balances humor and scares.” While he also embraces the fact that the story is targeted to a YA audience, “We didn’t want to go too young…We wanted to honor the material and the stories.”

Øvredal also admitted that he didn’t read the books when they were first released, because they were never published in his native country of Norway. But once he was able to get a copy of the short story collection, he enjoyed the books’ whimsical tone that balances the humor and horror elements.

“All these fun urban horror tales that were able to balance the humor and scares, and make them very interactive, really inspired the way I wanted to direct the movie,” the filmmaker added. “To make it a really fun, scary movie was absolutely my aim as a director,” Øvredal added.

When also asked if they would consider making sequels to the film adaptation, especially since there are so many short stories that Schwartz created, both del Toro and Øvredal revealed they would be interested in doing so. But the movie franchise’s continuation depends on the drama’s reception.

Del Toro also divulged that he not only hopes that ‘Scary Stories to Tell in the Dark’ received a positive reactions from movie-going audiences, but that families will also discuss the plot and characters after seeing the drama. “The real tragedy of horror is not to have your parents talk to you about it,” the producer said. “When you’re a kid, you’re curious about two things: sex and death…A lot of parents shy away from those things. But we live in the real world…we need to know the darkness to know the light. It’s something to bond over.”

The story contributor also disclosed that he wishes his “father and mother watched (horror) with me. The world is constantly telling you about everything great, as a kid; but in movies, nobody looks like you. But horror movies tell you: ‘There is a dark side, don’t worry.’ I think that’s really important.” 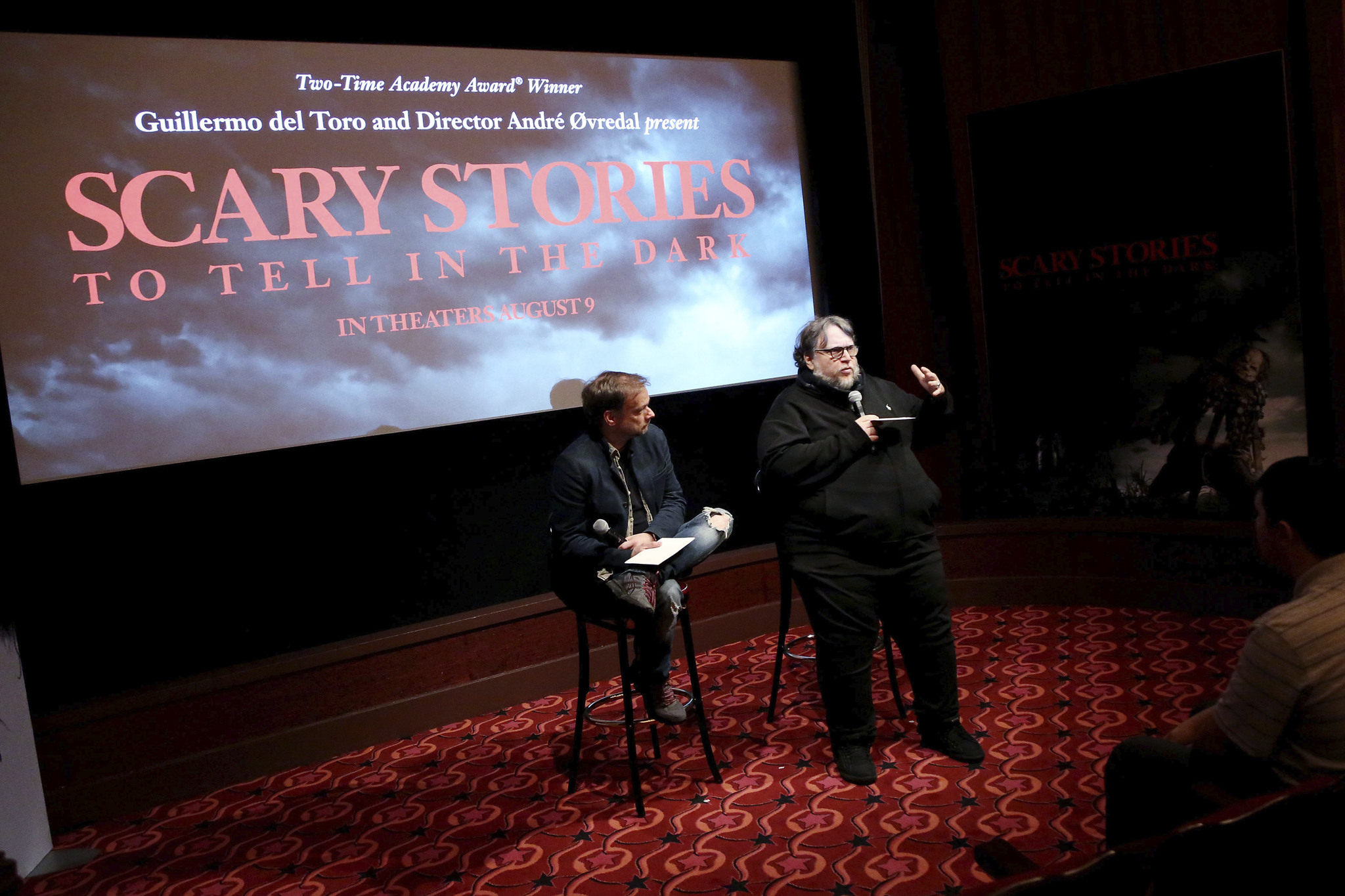