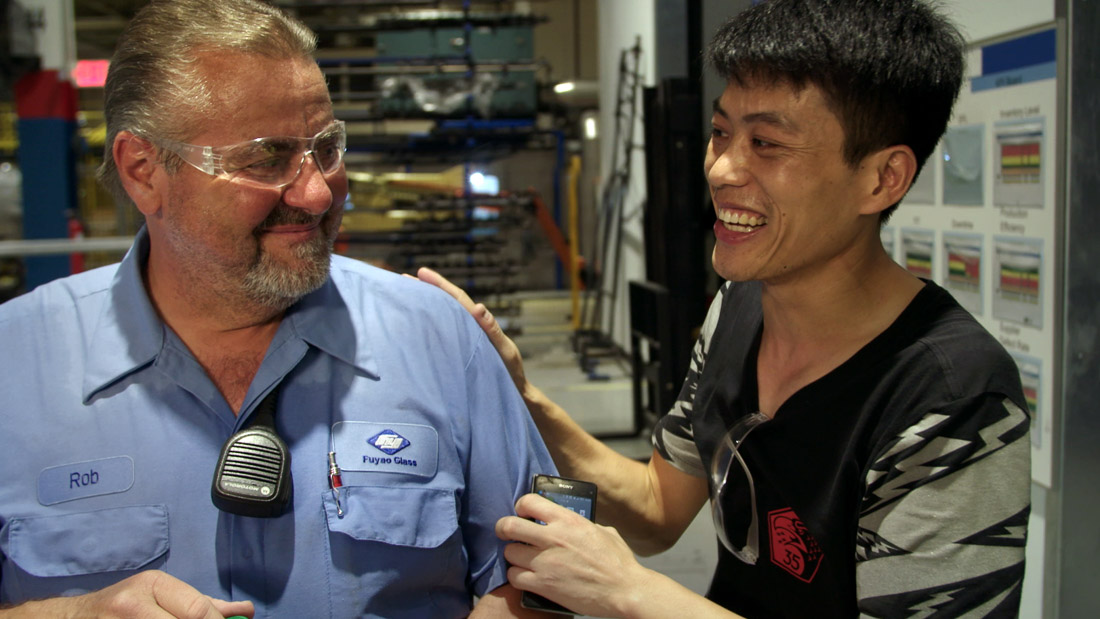 I once destroyed a fellow in a moderated debate. He said he would never buy a foreign car, thinking that if he did he would be throwing American workers under the bus (or car). I hit back by citing foreign autos which are made in the U.S., e.g. Mercedes and BMW in South Carolina, Infinity QX60 in Tennessee, Honda Accord and Acura in Ohio, all providing thousands of jobs for factory workers. We are living in a globalized world where products made by foreign companies use American workers, but sometimes management from China, or Germany, or Sweden come here to oversee the work. Think of Tom Hanks’ role as Chuck Nolan in “Cast Away,” traveling to the Soviet Union to represent management of a FedEx plant that opened there. He found the workers lazy and even wide-eyed at the suggestion that they should work since, after all, this was the socialist paradise where laborers pretended to work and bosses pretended to pay them.

A similar situation occurs in “American Factory,” but the shoe is on the other foot. Now American workers are accused of being lazy while Chinese at the same task are workaholics. The case involves Chinese investment in a factory that produces glass for automobiles. When the General Motors plant in Dayton, Ohio, closed,leaving well-paid factory employees jobless, the Chinese were welcomed as heroes. Flush with incentives from the Ohio state government, Cao Dewang the founder of Fuyao, the glass manufacturing plant built on the husk of the GM plant, hired some 2000 Americans while bringing in 200 potential supervisors from China. Though the American workers are paid only fifty percent of what they had been getting from GM, averaging about $25 an hour with the opportunity to earn more for overtime, these native Ohio workers are happy to have jobs at all. Never mind that they’re getting $14 an hour, which is less than the minimum wage that a clerk in a New York CVS earns. For this pay they risk injury, even death, from machines that emit heat past 200 degree Fahrenheit. They can be crushed by heavy machinery. The Chinese are not so careful about safety precautions, for as one American states, when he worked for GM he never witnessed a serious workplace injury. Julia Reichert and Steven Bognar, who direct this documentary, focuses the camera on one woman with a bandaged thumb and another with orthopedic boots and crutches.

Here come the inevitable culture clashes, and they are not about how Chinese eat with chopsticks and Americans partake of food with forks and their hands. The clash is over the length of the working day. While Chinese are accustomed to putting in 12 hours on a shift, comparable to what American nurses must slog through, Americans insist on the eight-hour day, five days a week. “They won’t come in on Saturday,” complains a Chinese supervisor. The Tom Hanks individual in “Cast Away” is now Chairman Cao, who doesn’t like the way Americans talk too much and lack the Chinese work ethic. Despite the alleged cushiness of their eight-hour day, Americans begin to talk union, with activists—who, predictably enough get fired—holding up signs urging an election on whether to join the United Auto Workers. Chinese management pays $1 million to a firm that hold sessions with the Americans, stating that the workers should vote the way they want but clearly pushing for a big “no” vote. When Cao bloviates that he will close the factory should the union get representation, you might predict how the vote will turn out.

On a note of lesser cultural importance, Americans are astonished that the Chinese TV screen, using costumed women and children, flash pictures of singers and dancers singing about the joys of work—not unlike the old Soviet propaganda pics with such titles as “How I settled down and loved a tractor.” Here is an example of socialist realism for a country that is communist in name only. When Chinese management announces that ten workers who turn out the most product will be given free trips to Shanghai, the audience look at the speaker as though he were talking in Swahili. These Americans on the plant floor are not world travelers looking at Safari ads or commercial for Viking cruises.

Ultimately it’s not the unions or the American work ethic or even the Chinese 12-hour shift people that will determine the future of a factory that has been making a profit since 2018, but automation. We see a band of Chinese gleefully conversing on how machines can do the jobs of people and how they can cut two workers here, four there, and so on.

If you watched the Democratic candidates’ debate on 7/30/19 you could not help noting that some candidates praise China for being in the forefront of industries like the manufacture of solar panels and other technologies that promise to reduce the carbon footprint, and this at a time that our president is doing nothing to encourage such progress nor does he even admit that the climate is changing. “American Factories” is an eye-opener that will depress viewers who had been hoping that Chinese investment in our country will save the day. Then again, promises have a way of sounding at first like poetry but ultimately fading as prose.