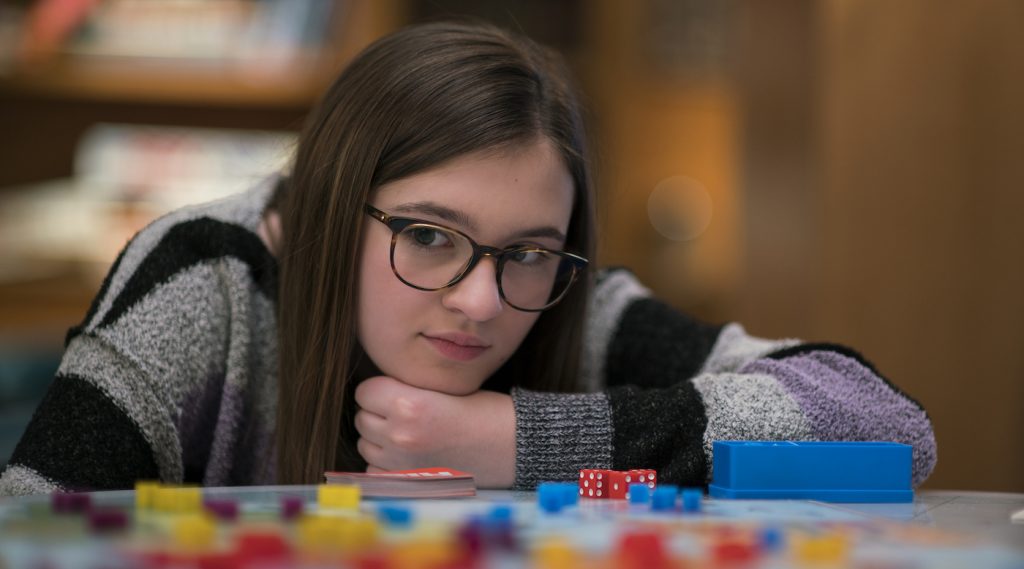 Learning to be comfortable with who they are, and where they fit into society, is a powerful emotional journey for anyone, especially since it can help bring families closer together. That’s certainly the case for the title character and her teenage child in the new comedy-drama, ‘Where’d You Go, Bernadette.’ However, the movie serves as a re-coming-of-age story for the protagonist, as her intelligent and mature daughter, Bee, is guiding her mother to reconnect with her personal and professional passions.

Based on the 2012 bestselling novel of the same name by Maria Semple, ‘Where’d You Go, Bernadette’ was directed by Richard Linklater. The Academy Award-nominated filmmaker also co-wrote the screenplay with Holly Gent and Vince Palmo. The promising young actress, Emma Nelson, made her feature film acting debut, opposite two-time Oscar winner, Cate Blanchett, in the comedy-drama, which Annapurna Pictures is releasing in theaters today, August 16.

‘Where’d You Go, Bernadette’ follows the title character (Blanchett), who was a pioneer of the green architectural movement 20 years ago. But after having her daughter, Bee (Nelson), Bernadette has become anxious, worried and addicted to making excuses about why she has to avoid society. Her husband, Elgie (Billy Crudup), has spent a significant amount of his time out of their home since their daughter was born, however, as he became dedicated to his career in technology.

Despite effortlessly bonding with her naturally smart daughter, Bernadette’s anti-social behavior has caused tension and conflict with her family’s next-door neighbor in Seattle, Audrey (Kristen Wiig). After Bernadette nonchalantly allows a mudslide from her family’s yard to inadvertently damage Audrey’s home during a school party, the normally passive Elgie finally realizes that he must do something to help his wife.

However, instead of seeking the treatment that her husband recommends, the former architect follows the advice she recently received from one of her former colleagues (Laurence Fishburne), who determines that she must create in order to emotionally and mentally survive. So Bernadette decides to momentarily escape her routine life to finally battle back against her current inability to focus and create.

Nelson generously took the time recently to talk about starring in ‘Where’d You Go, Bernadette’ during an exclusive phone interview. Among other things, the actress humbly discussed that being cast as Bee in the movie was a really redeeming experience, in part because it validated her decision to pursue acting in films. She also shared that she feels working alongside Blanchett, Crudup and Linklater heightened her performance and portrayal as Bee, and she cherishes the guidance they provided her on set.

The conversation began with Nelson explaining why she was drawn to play Bee in the feature. She revealed that she had been going on several auditions when she first heard about ‘Where’d You Go, Bernadette.’ The audition for the comedy-drama “gained some traction when I was asked to go for a call-back in New York. I live in Chicago, so I flew to New York, and had a chemistry read with Cate and Billy, and Rick (Linklater) was there, too. About a month later, I was told that I had gotten the part,” the actress revealed. She added with a laugh that “less than five days later, I was on a plane, going to rehearsals.”

With the movie being the first feature film that Nelson has starred in, the up-and-coming performer cherished her experience working on the project. She called being cast as Bee “a really redeeming experience. I felt so comfortable being on set, and it really confirmed everything I felt in my heart. I felt like I was meant to be there, and acting is what I love. It’s not necessarily that I deserved to be there, but I loved doing it so much,” Nelson further gushed about her time working on the comedy-drama. Being on the set “made me realize that this is exactly what I want to do.”

The actress then delved into what initially interested her in acting. “I did musical theater when I was younger, which is how I got into everything. I also sang when I was younger, and I still do-I love music. Then that naturally progressed into me acting in film, because as I got older, musical theater lost its appeal to me a little bit, after I figured out how much I love acting in films,” she admitted. “Not that I had been in a movie before this one, but the audition process for films was just so intimate, and a more personal experience that I loved a lot more. I’ve always loved performing on stage, but as I got older, I realized that films fit me a lot better.”

The experience of being able to act alongside Blanchett and Crudup, who Nelson previously mentioned, was also one that she’ll always cherish. “Obviously, they’re amazing actors. Cate is also an amazing woman, besides being such an esteemed actor. I’ve learned so much from both of them,” the young performer also gushed about her time collaborating with her co-stars. Being on set “was like a master class, every single day.

“Cate put so much thought into every scene, and she puts meaning behind every line. Especially during our rehearsal period, I found myself watching her analyze every scene that she did. I learned so much by watching her do that, and the creative process that she went through,” Nelson added. “So I learned a lot about character analysis through her practice of doing it.”

Also, being able to “work alongside, and opposite, all of these amazing actors heightened my performance. So I was incredibly lucky to be able to work with both of them, and the rest of the cast,” the actress added.

Once Nelson and her fellow performers started filming ‘Where’d You Go, Bernadette,’ they didn’t do much improvising on the set, she revealed. “We were pretty much word specific to what was written, but we did change some words during our rehearsals. We would add, or take away, some words, or even lines, during the rehearsals, if we thought it was necessary. That was all based on what we thought should have been included in the scenes,” she shared.

Following up on the experience of collaborating with Linklater as one of the screenwriters, as well as the director, like the performer previously mentioned, she called the experience “great. Working with Rick on the character development was amazing. During our rehearsals, like I mentioned, we would always have conversations, and he would ask me about what I thought about the character development and scene. He wouldn’t just direct me on everything; it was more like he would guide me. He trusted me with my ability to put myself into the character. So I had a lot of creative freedom,” she divulged.

The conversation then turned to the fact that the comedy-drama is based on Semple’s novel. “I think there’s a lot of pressure of turning a book into a movie. There are fans of the book who want the movie to have the same energy as the novel. Right before I got the call-back, I got the book and immediately read, and loved, it. My character in the film is almost completely based on who I connected with in the book, and how she came across to me while I was reading it.” Nelson added that “I really hope people who have-and haven’t-read the book will enjoy the movie.”

The actress then shared that there are elements of Bee that she felt that she related to during the shoot. “I think that I also learned a lot about myself by studying the character. I felt like she’s very curious, and cares about school. She’s also a very passionate and driven person, which I can really relate to, especially in the book. She’s a very complicated and complex girl, which is a very refreshing thing to see in a movie. She isn’t a stereotype; she has layers, and is a real girl, and I related to that,” she emphasized. “I also took from the way that she was able to relate to her parents, and had a close relationship with her mother, and at some points, her father. So I related that to my own life.”

Being able to build the relationship that Bee has with her mom throughout the narrative of ‘Where’d You Go, Bernadette’ was also something that Nelson cherished during the shoot. “I think it’s a great part of the movie that the relationship between Bee and Bernadette is so strong. I think a lot of when kids become teenagers, they start to grow apart from their parents.

“But that didn’t really happen between Bee and Bernadette. Bee’s such an independent girl, but she never really strays too far from her mom. Bee admires Bernadette so much as a person, so they’re partners in crime,” the further performer revealed. So she really liked developing her character’s relationship with Blanchett’s complex title protagonist.

“I think the relationship between our characters was always there, because Cate embodied Bernadette so well. That certainly helped me in my portrayal of my character,” Nelson also divulged.

Having the chance to play such a strong teenage girl like Bee, who was originally infused with a sense of independence by Semple in the novel, was a privilege for the actress. “That’s probably my favorite part about Bee; she does stand up for, and is passionate about, what she believes in, and has her own ideas. As a girl who’s becoming a young woman myself, that’s an important trait to see on screen…So it was an honor to play a girl like that,” Nelson revealed.