The celebrity lawyer had a surprise witness blow up in her face, got yelled at for baiting a witness and wasting time, and basically embarrassed herself in L.A. Superior Court 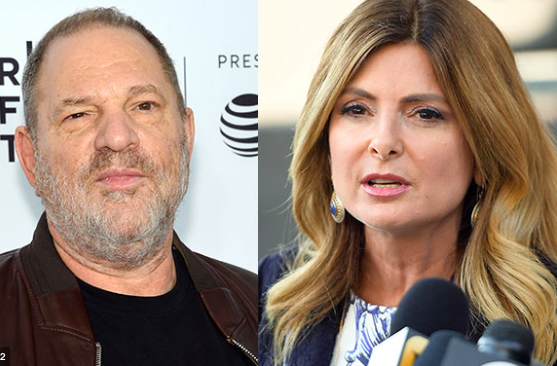 In the high profile Elizabeth Taylor v. Alki David trial, which TV lawyer Lisa Bloom hoped would help people forget about her ties to Harvey Weinstein, day 9 brought more sheriff’s deputies, the showing of the trailer for mockumentary Lord of the Freaks, and an ex-CFO who basically destroyed Bloom’s last hope.

That witness was the CFO of Alki David’s companies from 2010-2017. He confirmed there were only about 20 to 30 employees at the company in the year in question, and that it was natural for a small company to grow slowly into having a full-fledged human-resource department. He also shot down Taylor’s claim that she was a “top performer” in the sales department, verifying that she sold nearly nothing in her four and a half months at FilmOn.

He also spoke about his deep respect for David, both personally and professionally and said that though David is a colorful character, and can get loud, he never knew any of his behavior to cross the line. At one point David made exaggerated crying hand gestures from the counsel’s table as things clearly were going down in flames for Bloom. The sheriff’s deputy behind him put a heavy hand on David’s shoulder, but in truth was stiffling a laugh of his own.

Next Alki David was called to the stand by Lisa Bloom. In a contentious couple of hours, David landed many many more punches than Bloom who was clearly grasping at straws, petty details, and odd technicalities now that her plaintiff had admitted there were never any sexual advances.

Bloom played a clip from the mockumentary about Alki David and FilmOn called Lord of the Freaks in which a languid, posh, douchebag version of David, playing himself, says “I just like to watch people debase themselves. I love to watch people get hurt.”

“Is it true you like to watch people debase themselves?” asked Bloom.

“It’s a character, Dear,” David explained. He went on to explain that a mockumentary is not entirely real, that its a form of satire.

Satire was clearly a pretty foreign to Bloom despite being an elaborate self-parody herself.

The two then got in a protracted battle about David saying one of the reasons Taylor was fired was because she smelled badly.

“Actually, I called you a Smelly Witch,” said Alki.

At this point Judge Christopher Lui was visibly frustrated with Blooms, meandering, aimlesss questioning. He suggested she was trying to bait David into blowing up and walking out (as he did in a previous trial with Bloom), and that she’d better stop or he’d sanction her.

“You’re remarkably bad at your job,” David lobbed at Bloom before a break.

A low level assistant of Blooms than made a puffy chest gesture to David as if he wanted to fight. A deputy stepped in.

In the hall during break an attorney who is not associated with either side of the case told Shockya, “I’ve never seen anything like it. She’s actually the worst in a trial I’ve ever seen. I wouldn’t be surprised if she withdraws the whole case Monday–she seems so desparate.”

David managed to mention his intention to file a massive lawsuit against the Bloom Firm many times today, and referenced billionaire Steve Wynn’s defamation suit against Bloom twice. David also mentioned his own Feminist bona-fides, explaining that he sponsored Amber Rose’s SlutWalk in downtown L.A., a march and festival agianst slut shaming and campus rape in 2015, and streamed the whole day live on FilmOn.com and local cable TV. He also mentioned funding a Bob Marley Memorial woman’s soccer team, and a battered women’s shelter in L.A.

Bloom’s questioning petered out with no impact. Next came Ellyn Garofolo’s cross-examination. Garofolo spoke about an earlier complaint that Bloom had brought up, a sexual harassment complaint that specifically focused on an employee David had picked up and put in a garbage can.

They showed the video, which was easy to access because the stunt happened as part of a planned talk show skit on FilmOn.TV which the employee was on. In the video the complaintant was shown clearly laughing and in on the joke, and David was clearly playing a comedic role, and being gentle and careful as he moved her across the studio.

Garofolo and David then made clear that Taylor’s complaint that she was “wheelbarrowed” across the FilmOn office, was the same kind of comedic moment at the entertainment company, that Taylor was a laughing participant in the gag, and was never hurt or any danger.

Garofolo also showed the full trailer for the Lord of the Freaks movie, in which its very clear Alki David is inhabiting the role of an evil genius, directing a community of despearte weirdos, the BattleCam crowd. In it a man nails his scrotum to a board, Janice Dickinson shows her thong on camera, Kato Kaelin gets punched in the head, and people like Andy Dick, Sasha Gray, Ron Jeremy, and others make cameos.

At the end of the day Judge Lui repeated his warnings against Bloom, saying that despite the sanctions against David, he understood that he was representing himself for the first time. Bloom, on the other hand, he expected more of, and her transparent strategies to rile David were incredibly unprofessional.

But the best moment of the day has to have been when Bloom decided to discuss Manginas (an act also known as “tucking”) and worked out that it’s when a man tucks his junk between his legs and pulls down his pants, as David did a few times at the FilmOn office. Bloom had a hard time understanding exactly what she was accusing David of.

“Your honor,” said David, turning to Judge Lui. “Wouldn’t it be easier if I just demonstrated.”

“I….don’t think that will be neccessary, Mr. David,” said the Judge. Huge laugh from the jury.